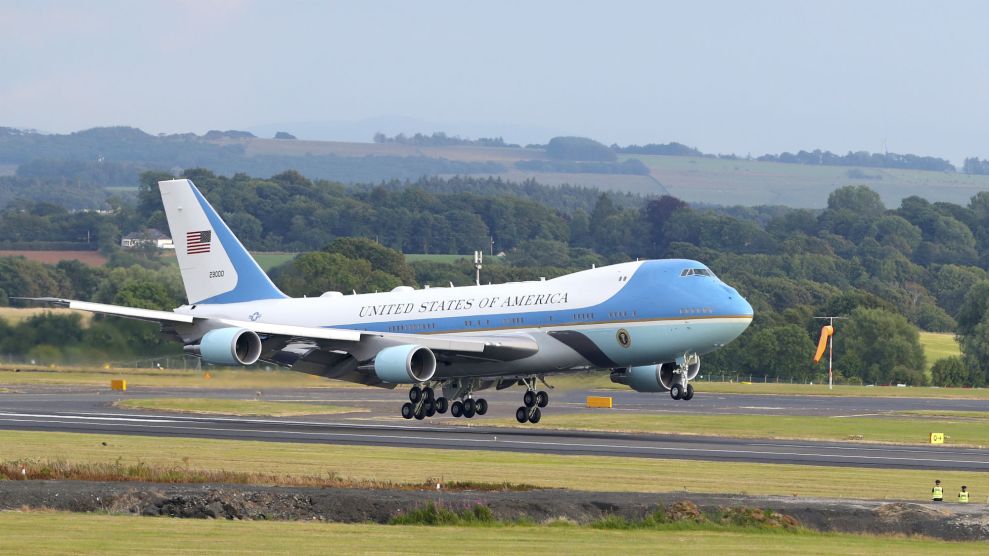 The House Oversight Committee is investigating whether the U.S. military is being used to steer taxpayer money to President Donald Trump’s Scottish golf course, according to a new report from Politico. According to the report, House Democrats who control the committee have launched a broad investigation into military spending that might benefit Trump’s Turnberry golf resort and nearby Prestwick Airport, which has struggled to stay afloat but which is vital to the relatively remote golf course’s operation.

Politico reported that since April, Congressional Democrats have specifically been investigating why an otherwise routine Air National Guard supply flight to Kuwait was directed to stop in Glasgow—instead of an Air Force Base in Germany, Spain, or even nearby England—and the five-man crew was put up at the Turnberry golf resort, 50 miles south of Glasgow. The resort’s website describes a level of luxury far removed from the basic quarters Air Force flight crews usually enjoy at the airbases where they land. The most basic room at Turnberry features

According to Expedia.com, the cheapest room at the resort can be booked next weekend for $286.

The resort has been something of a money pit for the president. After purchasing it for $60 million in 2014, Trump has poured cash into the resort trying to upgrade it—yet it has continually struggled to make any money. According to Trump’s personal financial disclosures, the course brought in $20.3 million in revenue in 2017, but it still failed to turn a profit, losing roughly $4.5 million.

Revelations of a new investigation into spending at the course comes on the heels of a controversial stay by Vice President Mike Pence at Trump’s Irish golf course—which also loses money—on an official visit to that country.

The broader Congressional investigation into spending at Turnberry also includes an examination of an increase in military spending on fuel at the Glasgow Prestwick Airport, which is the airport most convenient to Turnberry. The airport, which is much smaller than Glasgow’s main airport, was purchased by the Scottish government in 2013 to keep it from closing, but Scottish newspaper the Daily Scotsman reports that it has continued to lose money. The US military has become the largest source of revenue for the airport. According to the Scotsman, sales of aviation fuel to the US military have dramatically increased since the start of the Trump administration, with US taxpayers shelling out more than $11 million dollars between October 2017 and March of this year. The paper revealed on Saturday that in the past six months an additional $5.9 million has been spent.

The Guardian newspaper has also reported that Scottish lawmakers have likewise begun raising questions about the airport’s operation, with opposition lawmakers demanding to know more about a plan by airport officials to turn the airport into a spaceport with US backing. As part of the plan, airport officials have allegedly been promoting the proximity to Turnberry. According to the Guardian, they have struck a deal with Turnberry to provide free rounds of golf and stays at the course to visiting American military and civilian air crews.