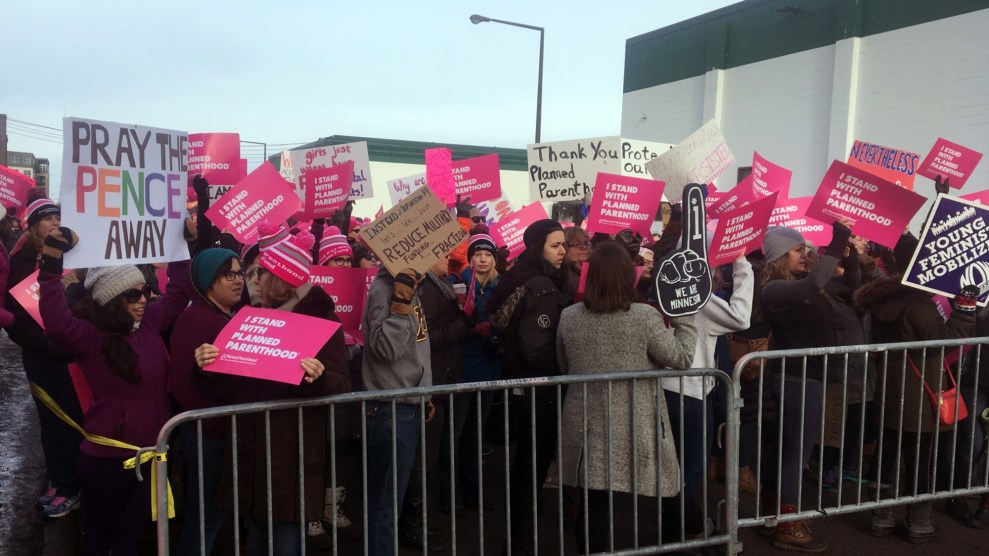 Since 1970, Title X has been the nation’s only comprehensive reproductive health care program, aimed at providing “contraceptive services, supplies, and information to all who want and need them.” In 2018 it served over over four million patients, mostly low-income women who relied on the program for everything from pap smears to IUD’s. But in August, the Trump administration instituted a “domestic gag rule” that blocked the nearly 4,000 health care facilities receiving a total of $286 Million in Title X funds from performing or even referring patients for abortions. The effects of that rule are already being felt, especially in states where Planned Parenthood has few options to make up for the lost funds.

As my colleague Marisa Endicott wrote in August when the gag rule first went into effect:

The new rule was proposed by the Trump administration late last year, and it is widely viewed as the latest push in the decades-long Republican effort to defund Planned Parenthood. Planned Parenthood has been in the Title X program since its inception and has received more funding than any other grantee…Title X funding is never used to provide abortion care—under the Hyde Amendment, the use of federal funds toward abortion procedures is illegal—and abortion services account for only 3 percent of Planned Parenthood’s medical services anyway. But the new policy may jeopardize access to health care for more than 1.5 million low-income women, many of whom reside in rural areas.

Planned Parenthood resigned from the program, arguing that it would no longer be able to provide their patients with a full spectrum of care if it remained. Since then, the nation’s largest single provider of reproductive healthcare for women has been scrambling to make up the difference. In some places like California, the state government has stepped in to fill the void, ensuring Title X patients are able to receive the full range of care they need. But in states like Iowa and Minnesota, whose state legislatures are dominated by Republican lawmakers, clinics receive no additional state funding and are unable make up the $4 million budget difference.

“This is an attack on the freedom of women to make decisions about their own lives,” says Sarah Stoesz President and CEO of Planned Parenthood North Central States, which includes Iowa and Minnesota. “But it is not an attack on all women’s freedom, it is only an attack based on how poor they are.”

Since its creation, the Title X program has provided grants from Health and Human Services to a network of providers including state health departments, family planning clinics, and universities. These providers then channel money to a much larger list of sub-grantees across the country. Before Trump changed the rule, patients who qualified for the Title X program would receive services at clinics and then pay along a sliding scale. Individuals with incomes at or below the poverty line who went to Planned Parenthood clinics would pay nothing for reproductive health services, and those with incomes between 100 and 250 percent of the federal poverty level were charged on a needs-based scale.

While, this is still the case, patients who go to a Planned Parenthood in Iowa and Minnesota who may have previously been paying nothing for services such as as contraceptive care, STI screenings, and cervical cancer screenings, are now having to pay out of pocket. “Women who have commercial insurance, women who have money, aren’t going to feel this at all because they will still be able to go to whatever provider they want including Planned Parenthood and they will be able to ask any question they want to about abortion,” says Stoez. “It is only the poorest of the poor who are being attacked this way.”

As a nurse practitioner at the Minneapolis Planned Parenthood, Kaitlyn Vaske-Wright has seen the effect of losing Title X firsthand. “We’ve seen a pretty big increase in folks leaving the clinic due to cost,” says Vaske-Wright. The clinic has been working to help cover some of the costs, but many patients who have been coming there for years expecting certain prices are now unable to get the services they need.

“Despite all my medical training I’m not able to get patients the care they need.”

“The most emotional conversations are typically around their birth control or their emergency contraceptives,” explains Vaske-Wright. She says that some patients have even passed up emergency contraceptives, which have a very narrow time period in which they can be taken, once they learn how much it would cost without Title X. “Despite all my medical training I’m not able to get patients the care they need,” she says. “It is happening daily, multiple times a day and I’m not sure what else I can do to help my patients more than I already am—and that’s very difficult to swallow right now.”

Many clinics are scrambling to figure out ways to offer services at reduced fees for their most vulnerable patients. Others are exploring the creation of  patient assistance fund through private donations, but none of this would be sufficient to cover the loss of Title X funds. “Suddenly our reliable partner in the federal government has disappeared,” says Stoez. “And it is very difficult for private sector donors to step in and make up the difference between what the federal government used to provide and what they currently do not provide.”

For the majority of these patients finding another clinic isn’t an option. In Minnesota, Planned Parenthood served over 90% of all Title X patients and was the only network of family planning providers in the entire state. In general, roughly 60 percent of women who use Title X facilities say it’s their only source of health care at all. Which means some of the most vulnerable individuals in the state may now be going without medical care of any kind.

The battle to save the Title X program is still underway. On Monday, the Ninth Circuit Court heard oral arguments from a lawsuit filed by 21 states and the District of Columbia, several doctors, clinics, and Planned Parenthood. They are charging that the new rule violates a congressional rider that states all pregnancy counseling must be neutral, since it requires providers to refer patients for prenatal care and blocks them from referring patients for abortions, regardless of whether they have expressed a desire to terminate their pregnancy. The court will decide if preliminary injunctions halting the gag rule issued by federal trial judges in San Francisco, Washington, and Oregon can go into effect. No ruling has been made yet, but the same panel of judges voted 7-4 in July to keep the rule in place until after the appeals process is resolved.

Another option could be Congress that also has the ability to block the Trump administration from going forward with its plans to severely limit Title X. In June, the House of Representatives passed a spending package that included Title X protections, however it is doubtful the measure could pass the Republican held Senate.