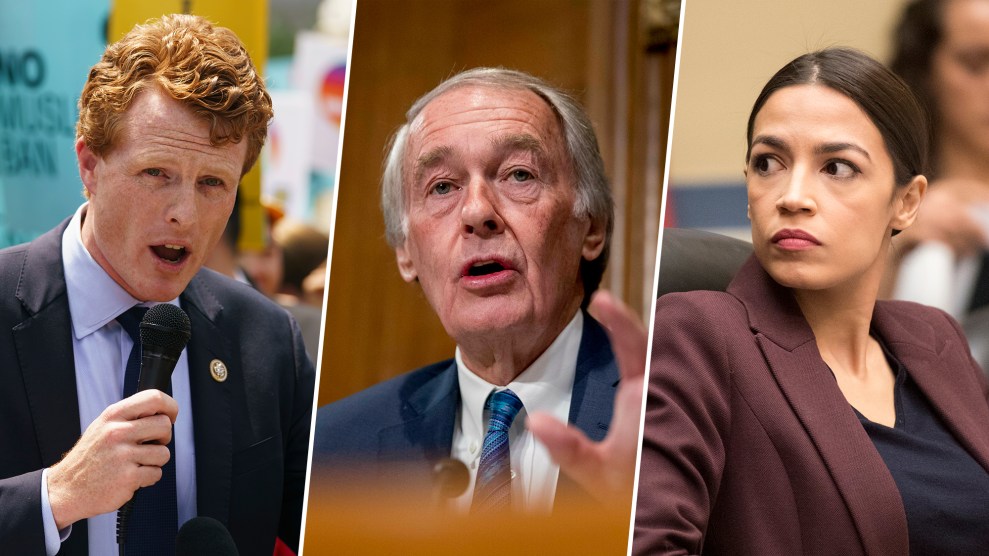 Last December, during one of her busy trips down to Washington to prepare for her congressional swearing-in, Alexandria Ocasio-Cortez grabbed lunch with Sen. Ed Markey (D-Mass.). The 29-year-old congresswoman-elect wanted to discuss potential opportunities to collaborate with the 72-year-old political veteran who, in 2009, had authored an ambitious climate bill that passed the House and failed in the Senate—something he and others blamed on the lack of a strong grassroots effort to bolster it.

Ocasio-Cortez could solve that problem. She had been ushered into office on a wave of progressive activism that put the climate emergency at the top of its to-do list, and had been working closely with the Sunrise Movement, the youth-led group of climate activists who a month earlier had captured national attention when Ocasio-Cortez joined them at a sit-in at Nancy Pelosi’s office. The group had identified Markey as a likely champion, given his disappointment over how his House-led climate efforts failed a decade ago.

Two months later, Markey, still sporting the same neo-Beatle haircut he entered Congress with 42 years ago, stood alongside AOC and a handful of Sunrise Movement youth to introduce the Green New Deal resolution, which Markey heralded as a “generational commitment to end climate change.”

Markey will soon need to rely on the connections he’s developed among the insurgent, younger Democrats if he wants to maintain his spot in Congress. On Saturday, Massachusetts Rep. Joseph P. Kennedy III made official what many have long speculated: The four-term Massachusetts congressman will mount a challenge against Markey in next fall’s primary. When news of Kennedy’s plans broke, the Boston Globe declared it “the starting gun of a generational showdown” between two candidates “separated more by age than ideology.” In his own announcement on Facebook, Kennedy declared he was in it for “the fight of my generation.”

But ever since rumors of 38-year-old Kennedy’s likely challenge began to swirl over the summer, the Millennial Left’s heroes have rushed support to Markey. The Sunrise Movement endorsed Markey in August. Rep. Ro Khanna (D-Calif.), a leading House progressive, followed suit in September. And, of course, Markey’s cosponsor on the Green New Deal has had his back and worked to quash Kennedy’s main narrative. “Sen. Markey is the generational change we need,” Ocasio-Cortez told reporters last week. “Generational change doesn’t mean ‘elect whoever is younger.’”

The progressive insurgency’s rush to boost Markey clarifies precisely the sort of change these activists are fighting for. “The progressive left cares about policy and ideology more than other things like age, or even issues of identity,” Waleed Shahid, the communications director for Justice Democrats, the left-wing political organization that recruited and backed Ocasio-Cortez, tells me.

In this race, it’s hard to measure “establishment” without a scorecard. Markey has been an elected member of the Massachusetts congressional delegation since the Bicentennial. Kennedy, a grandson of Robert F, has a last name that’s practically synonymous with “establishment.” A member of his not-so-extended family has served in Congress or the White House for all but two of the last 72 years.

“The progressive left cares about policy and ideology more than other things like age, or even issues of identity.”

At the same time, both have hewed to the bleeding edge of progressive politics. In addition to his longstanding role as a leader when it comes to pushing climate change legislation, Markey was at the forefront on issues such as net neutrality and denuclearization during his 13 terms in the House. And Kennedy has spent his scant time in Congress staking out a progressive record. Earlier this month, Kennedy, who backed the Green New Deal in December, wrote about the need to “end the filibuster, eliminate the electoral college and put in term limits for Supreme Court justices” on his Facebook page. Both have cosponsored their chambers’ respective Medicare for All bills and endorsed fellow Bay Stater Elizabeth Warren’s run for president.

But that’s not the right yardstick, Stephen O’Hanlon, a spokesperson for the Sunrise Movement, tells me. “Joe Kennedy got on board with the Green New Deal, but Ed Markey was there on day one.” O’Hanlon also pointed to reporting from Real Sludge that showed Kennedy had $1.75 million invested in fossil fuel interests via inherited family trusts, assets that have been a source of scorn among progressives who have demanded that campaigns and politicians divest their fossil fuel interests.

Since the 2018 midterms, progressive insurgents have had a reputation for being anti-establishment and uncompromising, a reputation they earned by unseating long-serving Democratic members of Congress. The youthfulness of those at the forefront of the leftward push—the under-30 Ocasio-Cortez and the Sunrise Movement’s teenage activists, for example—have often been held up as the movement’s key trait. Identity, too, has played a role. Squad member Rep. Ayanna Pressley (D-Mass.), a black woman who had served on Boston’s city council, unseated Mike Capuano, a similarly staunch liberal lawmaker, last fall.

But that’s just one piece of it, Shahid tells me, explaining it in terms of a Maslow’s hierarchy of needs for the progressive set. There are the Overton window-movers like the squad, who represent the purest form of the left’s political and policy vision. But there’s also people like Markey, “Democrats who have powerful roles in the party but see the winds changing” and choose to lead on progressive issues. Markey, Shahid explains, can “shift the center of gravity in Washington,” channeling the energy of the activist left to ensure their demands are represented at the negotiating table.

Part of that can be traced back to Markey’s own unlikely entrance into politics. Like AOC, he won his first House seat at 29. Unlike AOC, he didn’t unseat an incumbent—but he did succeed a Harvard-educated lawyer who had been President John F. Kennedy’s college roommate after a hard-fought primary battle. “Ed Markey is a young politician who came from nowhere in the polls to win one of the most confusing and hard-fought Democratic primary battles for a Congressional seat in Massachusetts history,” a 1976 Harvard Crimson profile of Markey said. “He showed that, in Massachusetts at least, you don’t have to enter a campaign with a large electoral base or ties to a powerful political machine…to win.” In 1982, he championed the “Nuclear Freeze” resolution, a bold plan to end the stockpiling of nuclear weapons that, much like the Green New Deal, was similarly decried as delusionally earnest in its day.

It’s hard to say whether that aspect of Markey’s brand or his support from national progressive figures will have any sway among Massachusetts voters. A poll conducted earlier this month put Kennedy 14 point ahead of Markey in a potential primary matchup. And while the Commonwealth is best known these days as the political birthplace of Sen. Elizabeth Warren, its statewide voting base is not quite the activist left. Voters have chosen a fair number of moderate Democrats to represent them in Congress, including House Ways and Means Chair Richard Neal, whose reluctance to sign onto progressive priorities has drawn a Justice Democrats-backed primary challenger. Five of its past six governors—including current Gov. Charlie Baker—have been Republicans.

Would progressives feel differently if, say, someone like Pressley chose to run? “Of course,” says Sean McElwee, the founder of the influential leftist think tank Data for Progress. “If Markey is going be replaced in the Senate, it should be by a progressive woman of color. But right now, Joe Kennedy is trying to take one of my only seven senators who gives a shit.”