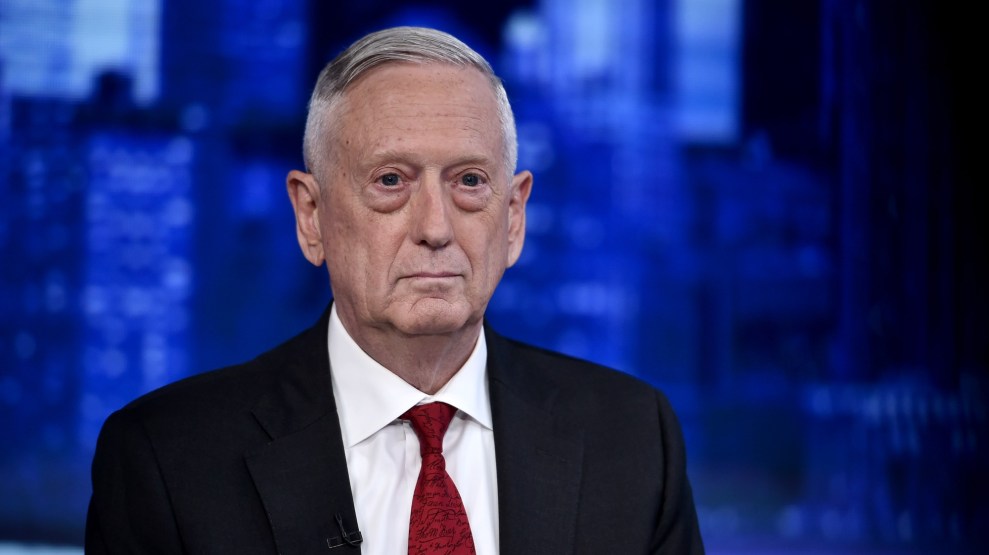 On a Tuesday morning in March, Guy Snodgrass emailed his former boss, Defense Secretary James Mattis, to break some news: A tell-all book he had been writing for Random House, containing his “fly-on-the-wall view of Mattis” formed after 17 months working as the former general’s speechwriter, was set to be announced the following day. “I don’t go anywhere near classified info or sources/methods, and don’t anticipate any significant concerns for the current staff,” Snodgrass wrote, trying to reassure the retired Marine Corps general.

But emails released as part of a lawsuit filed by Snodgrass last week show Mattis was less than pleased, and viewed the book as something of a betrayal. “I regret that you appear to be violating the trust that permitted you as a member of my staff to be in my private meetings,” he replied, adding that Snodgrass “would have been in none” had Mattis known he “intended to violate that trust.”

That tense exchange is at the center of a legal drama unfolding between Snodgrass and the Defense Department, which he sued claiming his book, Holding the Line: Inside Trump’s Pentagon with Secretary Mattis, had been “unreasonably delayed” by the agency’s customary prepublication review. Originally set for release on October 29, Snodgrass alleges the delays were orchestrated to “benefit” Mattis, whose own memoir, Call Sign Chaos: Learning to Lead, was published Tuesday—also by Random House.

The Pentagon did not have an immediate response to Snodgrass’s lawsuit. “We are reviewing the recently filed lawsuit and will consult with the Department of Justice,” spokesperson Lisa Lawrence told me. Snodgrass declined to comment, but told the Washington Post that he “remains committed to working with the Defense Department” to eventually publish the book.

Snodgrass told the New York Times in March that his book would provide “an understanding of what it’s really like to work at this level.” Unlike Mattis’s book, which omits direct criticism of Trump, Snodgrass’s tell-all was hyped by his publisher, a conservative imprint of Random House, as a firsthand look at the national security consequences of a president “whose actions were frequently unpredictable and impulsive.”

Holding the Line still has not been approved for release by Pentagon officials. Snodgrass and his attorney, Mark Zaid, have attributed the review’s protracted delays not to any sensitive content, but to Mattis’ lingering influence. “How convenient that Mattis wrote book while encouraging #Pentagon officials to deliberately slow-roll prepublication processing of his former aide’s book,” Zaid tweeted last week. “#Hypocrisy.”

Our latest lawsuit challenging @DeptofDefense prohibition on our client to publish book abt #Mattis.

A Navy pilot with two degrees from the Massachusetts Institute of Technology, Snodgrass joined Mattis’s staff as a speechwriter in April 2017, overseeing the secretary’s public statements and helping craft internal department guidance. He was Mattis’s point person during Trump’s visits to the Pentagon and “personally authored the General’s talking points, created the slides, coordinated the room, and collaborated with interagency staffers to prepare and carry out the events,” according to an August 23 email sent by Zaid to a Pentagon lawyer.

According to the lawsuit, Snodgrass hand-delivered his manuscript in April to the Pentagon so it could be reviewed to ensure he did not include any classified information. By late August, he still had not received approval from department leaders. “Senior leaders have directed my office to hold our response pending the outcome of high level discussions,” Pentagon official George Sturgis wrote to Snodgrass on August 23. “Definitely not the outcome we had hoped and worked for…”

Emails released as part of the lawsuit show the Joint Chiefs of Staff were particularly concerned with repeated references to the “Tank,” an ornate Pentagon conference room where Mattis met with Trump and other senior government officials. Pentagon official Paul Jacobsmeyer wrote Snodgrass on July 3 to relay the Joint Chiefs’ concerns about certain details he’d included in the manuscript, complaining that attendees at such meetings “need to have absolute confidence that their discussions, to include physical reaction and body language, will not be replicated, period.” (Trump’s visits to the Tank have been reported previously, including in an extended scene in Bob Woodward’s book, Fear: Trump in the White House.) “They desire that you remove the detailed disclosures, note that the meeting occurred, certain subjects were discussed, options provided, and decisions made,” Jacobsmeyer wrote.

“Senior leaders have directed my office to hold our response pending the outcome of high level discussions.”

In an affidavit submitted on Tuesday in Washington, DC district court, Snodgrass argued that the Joint Chiefs’ concerns were outside the purview of a normal pre-publication review. “Although the Joint Staff had not identified any classified information in my Manuscript, it was nonetheless taking the position that all conversations in ‘The Tank’ were considered non-attribution,” he wrote, “and was refusing to allow me to publish any related information.” Pentagon lawyer Robert Easton acknowledged as much in a July 17 email to Zaid, which described Snodgrass’ “duty to protect the confidences of Secretary Mattis and other senior leaders, including the President.” This admonition to keep Mattis’ actions and words secret “has absolutely no lawful authority,” Zaid replied in a sharp-tongued response the following day. On July 24, Easton wrote there could be “a range of potential consequences” for Snodgrass if he ignores his supposed “special obligation to protect such information regardless of classification.” Snodgrass, who left the Navy with the rank of commander, noted in his affidavit that he interpreted this comment as a “threat” to demote him in retirement.

A month later, Easton presented Zaid with a different reason to delay publication. Easton claimed that Snodgrass “regularly took notes in black Moleskine notebooks” during department meetings, demanding he promptly return the notebooks in accordance with federal archives laws. The only problem, according to Zaid, was that Snodgrass “did not use Moleskine notebooks for the taking of any notes within the Tank or at other meetings” and has no records to return.

Adrian Zackheim, the founder and publisher of Sentinel, the Random House imprint that purchased Snodgrass’ book, told the Washington, DC court in an affidavit that he will not release it until the Pentagon completes its review. But he told the court that the delays could be costly, as the company risks “losing retail placement” in the event the book is published after the holiday season. If somehow the process drags on into the 2020 primary season, Zackheim added, the value of the book “will be materially, significantly, and irreparably diminished” as attention shifts to the presidential candidates and away from two-year-old Pentagon drama.