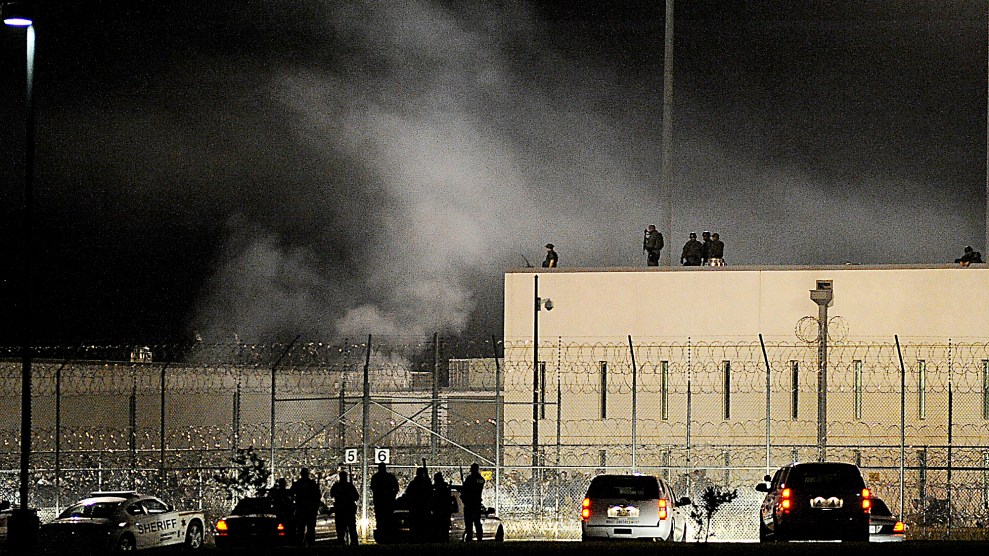 Officers stand on the roof of and outside the Adams County Correctional Facility in Mississippi during a 2012 riot. ICE recently started sending asylum seekers to the prison.Lauren Wood/AP

In 2016, Immigration and Customs Enforcement released 75 percent of eligible asylum seekers in Deep South detention centers on parole. By 2018, that figure had dropped to 1.5 percent. So far this year, it’s zero. And a federal judge says that’s not acceptable.

On Thursday, Washington, DC, district court judge James Boasberg ordered the agency to provide asylum seekers detained in the Deep South with a fair chance of being released. ICE policy requires it to provide asylum seekers with individualized parole decisions and to release them if they don’t pose a threat to public safety or a flight risk. ICE’s New Orleans field office—which covers Alabama, Arkansas, Louisiana, Mississippi, and Tennessee—must go back to following the agency’s parole policy, Boasberg ordered in a preliminary injunction.

ICE has undertaken a massive expansion in the Deep South this year, beginning immigrant detention operations in eight new jails in Louisiana and Mississippi. Boasberg’s will ruling will provide hundreds, and potentially thousands, of asylum seekers with a meaningful chance of being able to fight their cases from outside detention.

The Trump administration has argued, implausibly, that ICE’s 2009 parole policy remains in full effect. Boasberg did not buy that:

Defendants offer absolutely no explanation for the precipitous nosedive in the parole-grant rates issued by an Office that has allegedly preserved the same underlying policy for making those decisions all along.

There’s more. Plaintiffs also offer a number of declarations from asylum-seekers and their advocates that describe the New Orleans Field Office’s myriad violations of the Parole Directive. These declarations attest to the automatic, rather than individualized, nature of the parole proceedings…For example, various declarants assert that detainees often are not notified of the availability of parole. Even when they are, they receive parole documents in a language they do not understand, and they are often not granted an interview.

The judge wrote that the plaintiffs, represented by the American Civil Liberties Union of Louisiana and the Southern Poverty Law Center, offered substantial evidence that the parole policy had effectively been rescinded:

First, the sheer percentage of asylum-seekers denied parole by the New Orleans Field Office offers them powerful ammunition. In 2016, the Office denied parole in only 24.5% of the 229 decisions made. In 2017, that denial rate skyrocketed to 82% of 78 decisions. In 2018, it rose even higher to 98.5% of 130 decisions.

Isaac Molina, a Nicaraguan doctor and asylum seeker, was one of the people denied parole this year by the New Orleans office. As I wrote in February, Molina was shot twice after providing medical attention to protestors in Managua. ICE denied his parole request even though he was still recovering from the gunshot wounds and had multiple relatives who could take care of him. Molina was finally released in April after being transferred to a detention center outside of the New Orleans office’s jurisdiction.

Boasberg issued a similar parole decision in 2018 that applied to five other ICE field offices. Ansly Damus, a Haitian asylum-seeker and the named plaintiff in that lawsuit, spent two years in a windowless jail after ICE repeatedly declined to release him on parole.

Laura Rivera, the director of the Southern Poverty Law Center’s Southeast Immigrant Freedom Initiative, says the immediate impact of Thursday’s decision will depend on the extent to which ICE complies with it. Rivera said that after the Damus lawsuit, the plaintiffs filed a motion to hold ICE’s Los Angeles field office in contempt for failing to change its parole practices. The Los Angeles office effectively admitted that it had made no changes in response to Boasberg’s 2018 decision, she said.

The clearest evidence that ICE’s New Orleans office had abandoned the parole policy came from one of its own officials. Last year, the American Immigration Lawyers Association asked New Orleans assistant director Brian Acuna if the policy was still in effect. Acuna replied, “Technically no.”

After that email was cited in the parole lawsuit, Acuna said in a declaration that he had gotten it wrong and the parole policy was still in place. Acuna didn’t explain why ICE’s parole denial rate had increased from 25 percent to what Boasberg called the “the unsurpassable height” of 100 percent.