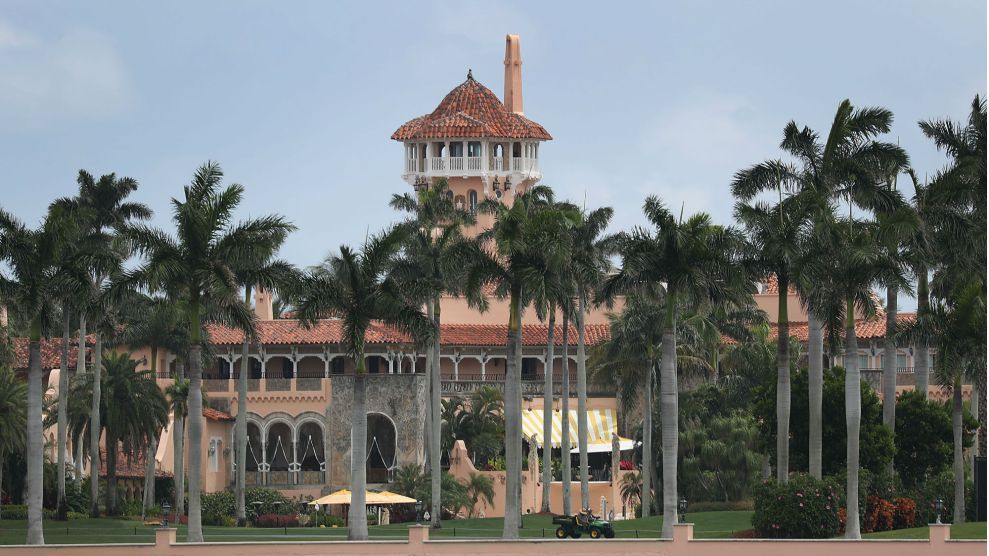 A jury in Ft. Lauderdale, Fla. on Wednesday convicted a Chinese woman for trespassing and lying to a Secret Service agent at Mar-a-Lago on March 30. The verdict did not clarify whether the intruder, Yujing Zhang, a 33-year old financial consultant from Shanghai, was spying for the Chinese government.

Zhang’s conviction, does, however, highlight lingering security and ethical concerns raised by President Donald Trump’s insistence on owning and regularly visiting his private club. This is the latest development in an ongoing saga of potential Chinese influence on the Trump administration. Zhang is connected to Li Weitian, a Chinese businessman who had a business relationship with Cindy Yang, a Chinese-American entrepreneur who peddled access to Trump and Mar-a-Lago, according to a Mother Jones investigation published earlier this year.

Zhang was in possession of an array of electronic equipment when she was arrested, including a laptop, an external hard drive, four cellphones, and device that could help detect security cameras, which prompted suspicions she was engaged in espionage. Prosecutors in the case filed information under seal, citing national security concerns, and the Miami Herald reported that the FBI has investigated both Zhang and Yang as part of a broad counterintelligence probe into Chinese intelligence operations targeting Trump and Mar-a-Lago. Still, prosecutors did not charge Zhang with espionage or related crimes, and neither her conviction nor her sentencing, scheduled for November 22, are likely to clarify her motives.

Zhang reportedly was at Mar-a-Lago because she says she thought she had purchased access to an event there through an organization run by Yang, who has helped fundraise for Trump and other prominent Republicans. A Mother Jones investigation revealed that Yang, who became a frequent guest at Mar-a-Lago in 2017, had set up a company that offered potential Chinese clients access to Trump and Mar-a-Lago. At the same time, she maintained positions as an officer in two groups with ties to China’s government. One of those groups was the Florida branch of the Council for the Promotion of the Peaceful Reunification of China has been described by experts as a vehicle for projecting Chinese influence in the West under the direction of the Communist Party’s United Front Work Department.

In 2017, Yang began selling tickets to Mar-a-Lago galas as part of travel packages pitched to Chinese clients eager to visit the Trump property in 2017. She sometimes offered clients the chance to meet members of the Trump family, such as his sister, Elizabeth Trump Grau. Yang’s efforts helped fill a void created after many organizations canceled plans at Mar-a-Lago due to Trump’s controversial comments that “there were many fine people on both sides” at a violent alt-right protest in Charlottesville, according to multiple reports. Li Weitian, also known as Charles Lee, resold some of Yang’s tickets via the Chinese social media site WeChat. Lee, the Herald wrote, recruited “clients for…events advertised by Yang as opportunities to pay for face time with Donald Trump.” Lee has founded multiple organizations with names that falsely imply a connection to the United Nations. Zhang paid Lee $20,000 for a travel package that supposedly included tickets to a “United Nations friendship event” at Mar-a-Lago.

Prosecutors said this week that prior to the supposed event, Lee told Zhang that it had been canceled. Zhang, in a text message, asked Lee for her money back. She traveled from Shanghai to Florida anyway and was caught trespassing at Mar-a-Lago, though she claimed to be there for an unscheduled event. Her motives remain unclear.

What is clear, though, is that Trump’s decision to keep operating Mar-a-Lago as president and to profit from guests eager to access and influence him has created a major conflict of interest, a market for access peddlers, and a target for foreign intelligence agencies. Spy or not, Zhang was a small fish in a big swamp.