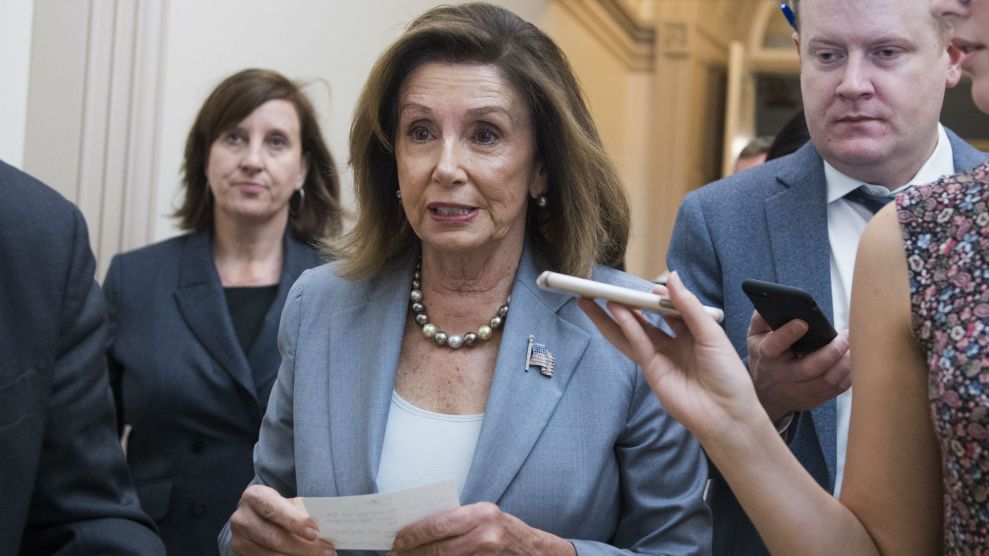 House Speaker Nancy Pelosi on Tuesday announced plans to launch formal impeachment proceedings against President Donald Trump. In recent days, a growing number of Democrats have argued that Trump’s efforts to pressure Ukrainian leaders to investigate former Vice President Joe Biden and his son could be grounds for removing the president from office.

“The actions of the Trump presidency revealed the dishonorable fact of the president’s betrayal of his oath of office, betrayal of our national security and betrayal of the integrity of our elections,” Pelosi said in televised remarks on Tuesday evening. “Therefore, today, I am announcing the House of Representatives moving forward with an official impeachment inquiry.”

Pelosi’s announcement, which came after she met with Democratic committee chairs and then with the full House Democratic Caucus, reflects a dramatic political shift resulting from Trump’s recent actions. Pelosi has previously opposed calls for the House to move toward impeaching Trump, arguing that it could backfire politically and harm efforts to defeat Trump next year.

But Trump’s apparently brazen effort to use US power for personal political gain has changed the equation. An impeachment trial has little hope of succeeding in the Republican-controlled Senate, but Democrats say Trump’s conduct leaves them no choice. The Trump administration, backed by the Justice Department, has also enraged Democrats by refusing to share with Congress a whistleblower complaint believed to relate at least in part to Trump’s pressure on Ukraine, despite a law that requires them to turn over such a complaint to the House and Senate intelligence committees. “This is a violation of law,” Pelosi said.

Former Special Counsel Robert Mueller reported in April that Trump’s campaign had extensive contacts with Russia and expected to benefit from Russia interference in the 2016 election. Mueller also found that Trump had taken various actions to thwart the special counsel’s probe that meet criteria for obstruction of justice. But Mueller concluded that he could not establish that the Trump campaign engaged in a conspiracy with the Kremlin, and he decided, based partly on Justice Department policy, not to recommend charging Trump with obstruction. That left Democrats divided over the politics of impeachment.

Caught between Pelosi’s trepidation and pressure from progressives, the House Judiciary Committee previously launched a tortuously defined investigation that Rep. Jerry Nadler (D-N.Y.), the panel’s chairman, argues is effectively already an impeachment inquiry, though the full House has never voted to launch such a probe.

Trump’s conduct toward Ukraine has blown away such hang-wringing, uniting Democrats. More than a dozen additional Democrats—including several who won in hotly contested swing districts last year—have called for impeachment or an impeachment inquiry since Monday.

Trump has publicly admitted to pressing Ukrainian president Volodymyr Zelensky for information about Biden, effectively daring Democrats to stop him. The Wall Street Journal reported that Trump urged Zelensky roughly eight times to work with Trump’s personal lawyer, Rudy Giuliani, on an investigation into the Bidens. Democrats say they have an obligation to act to stop such conduct.

“Any attempt by a President to use the office of the presidency of the United States for personal political gain—rather than the national interest—fundamentally undermines our sovereignty, democracy, and the Constitution,” Reps. Adam Schiff (D-Calif.), Eliot Engel (D-N.Y.), and Elijah Cummings (D-Md.), who chair key congressional committees, wrote in a letter Tuesday to White House counsel Pat Cipollone. “If the recent reports are accurate, it means the President raised with a foreign leader pursuing investigations related to a political opponent in an upcoming US election. That is the very definition of corrupt abuse of power.”

The Democrats demanded that Cipollone turn over documents related to Trump’s contacts with Zelensky by Thursday.

Trump and Giuliani have tried to make an issue of Biden’s push in 2016 for Ukrainian leaders to fire the country’s top prosecutor, Viktor Shokin, over his reluctance to investigate corruption in the country. Biden’s actions were part of an international effort to oust the prosecutor. Trump has asserted, without evidence, that Biden acted to protect his son, Hunter Biden—who had a board seat on a Ukrainian natural gas company, Burisma Holdings—from an investigation by prosecutors there. But Shokin was not actively investigating the company at the time of his ouster. This was reportedly part of the reason he was removed.