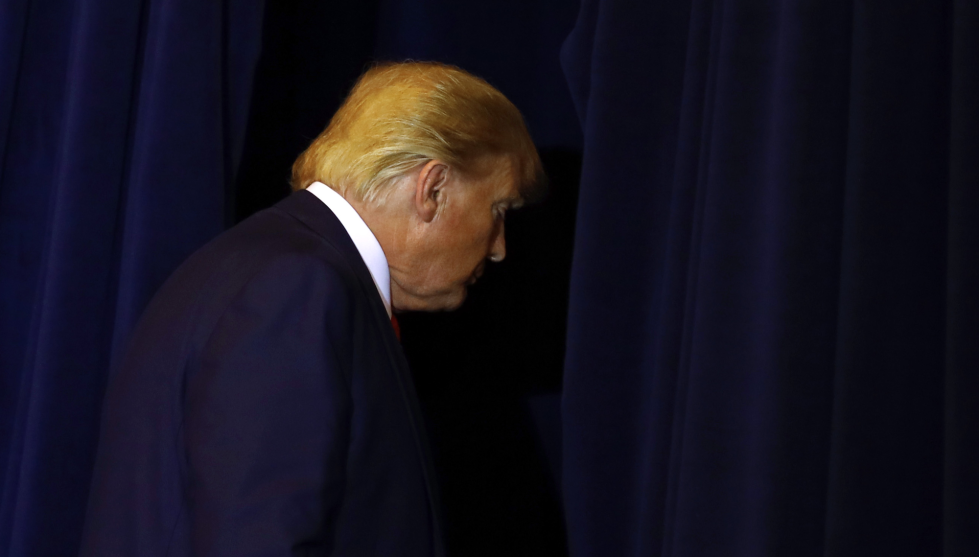 As the White House scrambles to mount a defense against impeachment proceedings—a predicament Donald Trump reportedly never thought would come to life—scrutiny into the president’s efforts to cover up the cover-up is intensifying.

Kurt Volker resigned as U.S. Special Envoy for Ukraine after Giuliani, covering his own ass, released text messages showing that Volker helped him seek dirt on Biden and the Trump-Russia probe from a Zelensky aide. https://t.co/CTYfPgfPQU

6:47 p.m. ET: Rep. Mark Amodei of Nevada became the first Republican House member to support the impeachment inquiry. “Let’s put it through the process and see what happens,” he told the Nevada Independent. Amodei even leaned into it a bit and said, if an inquiry showed someone using government agencies to try to tip an election, “there’s a problem.”

5:24 p.m. ET: The New York Times reports that President Trump met with Wayne LaPierre to “discuss how the NRA could provide financial support for the president’s defense” during the impeachment inquiry. LaPierre, head of the NRA, has been trying to make sure Trump doesn’t enact any gun control in the wake of mass shootings, according to the report. You may recall that earlier today, Sen. Ron Wyden (D-Ore.) released an investigation calling the NRA a “foreign asset” during the 2016 election for Russia.

4:48 p.m. ET: The House issued its first subpoena. It requested a slew of documents related to the Ukrainian scandal from Secretary of State Mike Pompeo by October 4. And, in the accompanying letter, it also laid out a slew of Rudy Guliani’s public statements they say raise “troubling questions.”

2:08 p.m. ET: The only thing more delightfully dumb, impeachable, and insidious than a president of the United States calling an apostrophe a “hyphen” and nitpicking over CNN’s nitpicking over Trump’s nitpicking over grammar and spelling on Twitter, all in the past few hours, is a nation that takes the bait and more than a minute to talk about it. So I’ll write this in under a minute, and hope you read it in less.

At the doorstep of impeachment, shifting gears to rattle copy editors’ cages and stir up a grammar investigation is like Tactic 2 in Trump’s misdirection playbook, but petty begets petty, so our talent for obliging him was on full display this morning, when I awoke to a copy editor friend’s email titled “Trump became a copy editor overnight?” Every news outlet on the planet was asking the same. I would explain, but that would put us over a minute. Read more here. But don’t. ‹59 seconds› —Daniel King, Mother Jones copy editor

12:51 p.m. ET: Presidential candidate Rep. Tulsi Gabbard (D-Hawaii) is finally on board with the impeachment inquiry.

Tulsi Gabbard is now a “yes” on the impeachment inquiry.

She had previosuly (even earlier this week) said impeachment talk was divisive. pic.twitter.com/yVVFHWcmNo

10:40 a.m. ET: The White House confirms, for the first time, a major allegation in the whistleblower complaint, that the transcript of Trump’s phone call with Ukraine’s president was moved to a separate classified server. (Yes, a server.) A senior official told CNN that the decision for the highly unusual move came at the direction of lawyers for the National Security Council.

8:15 a.m. ET: Gabriel Sherman reports on the existential crisis hitting Fox News this week, with even Sean Hannity acknowledging that the whistleblower complaint at the center of Trump’s Ukraine scandal is “really bad” for the president. Meanwhile, White House aides are quickly realizing there is no roadmap.

7:50 a.m. ET: “This is no cause for any joy,” House Speaker Nancy Pelosi says on impeachment during an appearance on Morning Joe. “This is a very sad time for our country.” Pelosi also blasts Attorney General William Barr for going “rogue” in his unprecedented efforts to shield the president.

Speaker Pelosi says on AG Barr: “He’s gone rogue … I think where they are going is the cover up of the cover up, and that’s very really sad for them. To have a Justice Department go so rogue … now it just makes matters worse.” pic.twitter.com/l6jhF1UzjJ

…sound horrible, and me sound guilty. HE WAS DESPERATE AND HE GOT CAUGHT. Adam Schiff therefore lied to Congress and attempted to defraud the American Public. He has been doing this for two years. I am calling for him to immediately resign from Congress based on this fraud!

7:00 a.m. ET: The president emerges Friday morning laser-focused and ready for battle. We won’t insult you by pointing out the obvious errors in this one.

To show you how dishonest the LameStream Media is, I used the word Liddle’, not Liddle, in discribing Corrupt Congressman Liddle’ Adam Schiff. Low ratings @CNN purposely took the hyphen out and said I spelled the word little wrong. A small but never ending situation with CNN!