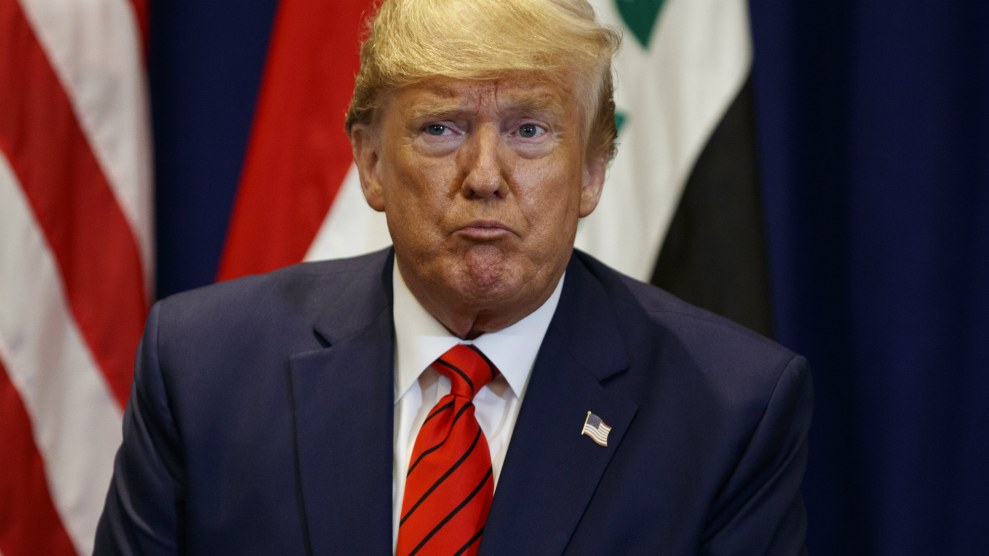 Donald Trump’s reelection campaign wasted no time trying to capitalize on the Democratic push for impeachment, blasting out a fundraising email Tuesday afternoon urging supporters to help defend the president by donating to his campaign. The email contained several dubious promises, including the claim that immediate contributions would result in donors being added to an “Official Impeachment Defense Task Force.” The email also stated that donations would be “double matched”—which is unlikely to be true, due to federal campaign finance laws that impose strict limits on political donations.

The number of Democrats calling for impeachment has risen gradually over the summer, but as recently as last week this step was still opposed by the Democratic Party leadership. Following revelations that Trump pressed Ukraine’s president to investigate discredited allegations against Joe Biden and withheld military aid from the country to ramp up pressure, dozens of Democratic lawmakers joined the call to begin impeachment proceedings. Ahead of a 5 p.m. press conference Tuesday afternoon, at which House Speaker Nancy Pelosi is expected to publicly call for an impeachment inquiry, the Trump campaign fired off its fundraising pitch:

These Impeachment claims have nothing to do with the President – the Democrats thrive on silencing and intimidating his supporters, like YOU. They want to take YOUR VOTE away.

We won’t stand for this any longer, and neither should YOU. Which is why President Trump is launching the Official Impeachment Defense Task Force.

This task force will be made up of only President Trump’s most LOYAL supporters, the ones committed to fighting for him, re-electing him, and taking back the House.

The email also suggested that by donating to the campaign supporters would be defending the very integrity of America:

As a member of the Official Impeachment Defense Task Force, you will be a leader in defending the President against these baseless and disgusting attacks. You will be responsible for defending American Greatness.

The future of American freedom rests on the shoulders of men and women willing to defend it from these hateful attacks, and today is a day for action.

The fundraising appeal claimed that Trump had personally requested to see a list of people who had joined his “Official Impeachment Defense Task Force” and urged donors to send their money before 3:30 p.m., when the list would supposedly be sent to the president. Shortly after the deadline passed, Trump’s campaign sent a nearly identical email, this one saying the deadline was 4 p.m.

Campaigns have fairly wide latitude to make promises in campaign fundraising emails, so Team Trump’s claims of an official “Task Force” or that Trump would personally review the names of donors don’t have to be true. Another suspect claim: the email’s pledge that donations would be “double-matched.”

Donor match programs are common in the nonprofit fundraising world and are considered to be highly effective in encouraging donors who might be on the fence about giving. In the nonprofit world, a match program typically involves a one or several particularly generous donors, who are poised to write big checks if smaller donors start giving. However, in the political sphere, federal campaign finance laws make things a little more complicated, since individual donors are legally capped at giving no more than $5,400 to a campaign per election cycle. That means a single generous donor can’t match new small donations. If a campaign wants to raise money on any large scale, even a handful of generous matching donors won’t work—hundreds or thousands would be necessary. It’s unlikely that would really happen.

The Trump campaign did not respond to questions about its “Official Impeachment Defense Task Force,” how many donors had joined, or how it planned to “double-match” their contributions.