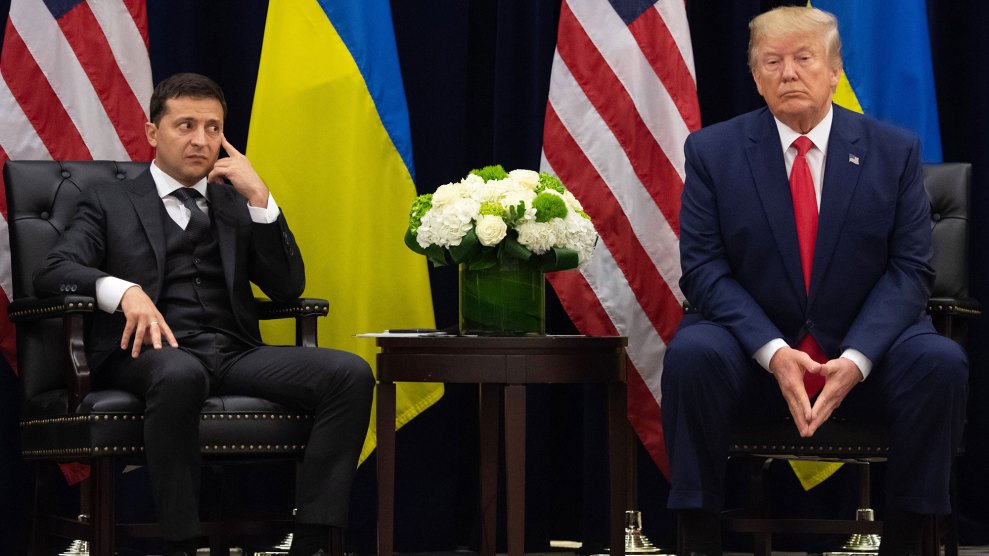 When President Donald Trump released a quasi-transcript of his July 25 phone call with Ukrainian President Volodymyr Zelensky, he was trying to short-circuit a burgeoning scandal that was fueling a cry for his impeachment. Because there was no making-an-offer-you-can’t-refuse quid pro quo in the memo reconstructing the conversation, Trump believed he could spin this document into a defense. The truth was that this account contained an extremely quid-pro-quo-ish exchange. When Zelensky said Ukraine wanted more US anti-tank weapons, Trump immediately replied with a request for a “favor”: that is, Ukrainian-made dirt he could use against Joe Biden and the Robert Mueller investigation. Even though GOPers and conservative pundits did cite the document in echoing Trump’s claims of innocence, its release did not help the president and his crew. But there was one head of state it did indeed help: Vladimir Putin.

The memo included remarks from Zelensky that made the new and inexperienced Ukrainian leader—he was previously a television comedian—look pretty damn bad. In the conversation, he slavishly kowtows to Trump’s improper requests. He sucks up to the American president by noting he stayed in one of his properties on a trip to New York City. More significantly, he diminishes the assistance Ukraine has received in its fight against Russia from President Emmanuel Macron of France and Chancellor Angela Merkel of Germany. “They are not working as much as they should work for Ukraine,” Zelensky is quoted in the White House account. And Zelensky reportedly agreed to the release of the reconstructed transcript because he had the impression that Trump would only be putting out Trump’s side of the chat—not Zelensky’s. So it appears the Ukrainian leader got played.

Trump’s decision to disclose the conversation has not led to a crisis in Ukraine for Zelensky, but it has strengthened the hand of Ukraine’s biggest foe: Russia.

Trump’s decision to disclose the conversation has not led to a crisis in Ukraine for Zelensky—this spring he won the presidency with nearly three-quarters of the vote—but it has strengthened the hand of Ukraine’s biggest foe: Russia, which annexed Crimea in 2014 and remains in control of portions of eastern Ukraine that were seized by Russian and Russia-backed forces. This controversy has provided Moscow with a load of ammo for the disinformation campaign it has been waging against Ukraine and its government for years. Moscow, as Yevhen Fedchenko puts it, has “weaponized” Trump’s Ukraine scandal.

Fedchenko is the director of the Mohyla School of Journalism at National University of Kyiv-Mohyla Academy and a founder of the StopFake.org fact-checking website, which combats Russian disinformation about Ukraine. (The site recently posted a video debunking Russian news reports that claimed Ukrainian grandmothers were being armed with machine guns so they can defend themselves against Russia, that Ukraine is facing a second Chernobyl, and that several Ukrainian cities have been appropriated by Poland.) On Friday, Fedchenko explained to me how this recent episode is a gift for Moscow.

As Russia has continued its occupation of Ukraine, it has mounted an extensive disinformation campaign aimed at forcing Ukraine to accept Russian control of the territories it holds. And this effort has relied on several major themes: Ukraine is a failed state; Ukraine has diminished standing in the world and is not truly of concern to Western nations; Ukraine is a pawn in larger geostrategic conflicts; and the Ukrainian government is soaked in corruption (even though corruption has been on the decline). The so-called transcript of the Trump-Zelensky call reinforces these sentiments.

The memo, Fedchenko notes, can be cited by pro-Russia propagandists to show that “Trump won’t really do anything to protect Ukraine.”

This memo, Fedchenko notes, can be cited by pro-Russia propagandists to show that “Trump won’t really do anything to protect Ukraine,” and Zelensky’s remarks about Germany and France can be used by pro-Russia elements to contend that Europe won’t be a stalwart defender of Ukraine in its conflict with Russia. “This material is useful for Russia propaganda,” Fedchenko says. “You can recycle it and say that now Ukraine is corrupting the US system and portray the Ukrainian government as an incompetent state and deny the agency of Ukraine. You can say it’s completely dependent on the US position.”

Fedchenko points out that in recent days the television networks, news agencies, and websites of Russia’s mainstream media—which are essentially controlled by Putin’s government—has pounced on the Ukraine scandal, devoting hours to the story, in order to advance Moscow’s interests. On the major networks in Russia, talking heads have advanced the messaging that Ukraine is not truly its own state and that other nations will not fully support it. This message is then spread into Ukraine through social media. The Russian propaganda push has also largely praised Trump for his handling of the situation and criticized the Ukrainian government for supposedly trying to influence politics in the United States. (Yes, you read that right.) “There are a lot of contradictions,” Fedchenko says. “Ukraine is a failed state that no one cares about, but Ukraine is manipulating US elections and politics.” That is, the disinformationists of Russia are mounting a classic play: Throw whatever you can at the wall and see what sticks.

Fedchenko senses Moscow has revved up its propaganda efforts this week: “It’s intensified.”

The overarching goal for Russia is to get Ukrainians to believe that they are largely on their own. “There’s just Russia and Ukraine and no international coalition supporting Ukraine,” Fedchenko says, “and Ukraine is left without reliable military or political back-up.” And Zelensky’s remarks can be used—even if in somewhat of a tortured way—to push that point. As Fedchenko notes, “Russia wants there to be direct negotiations between the two countries, with Ukrainians believing no one cares about you. So let’s discuss peace, but on Russia’s conditions.” And this is a dangerous moment, he adds. Zelensky is inexperienced in diplomacy and governance, and he is not surrounded by a team of well-seasoned advisers and aides. (“Oh, Putin is loving this. It makes the Americans look unreliable and strengthens the hand of the Russians and the pro-Russians in the east,” Alex Crowther of the National Defense University told Foreign Policy. “By withholding aid, you are injecting instability into an already unstable situation and strengthening the Russians.”)

Fedchenko admits that he cannot quantify the ongoing Russian disinformation campaign now exploiting the White House memo. But he senses Moscow has revved up its propaganda efforts this week. “It’s intensified,” he remarks. “This case is certainly in progress. Russia is using this to try to corner Ukraine into one-on-one negotiations.”

By disclosing the quasi-transcript, Trump didn’t do himself any favors, and he certainly undermined Zelensky to Moscow’s advantage. But the same day Trump put out the memo, he went even further in screwing Zelensky. During a meeting with the Ukrainian president on the sidelines of the United Nations General Assembly, Trump said, “I believe President Putin would like to do something. I really hope you and President Putin get together and can solve your problem.”

It was a double whammy. First Trump provided Moscow a set of highly useful talking points for its disinformation war against a nation it has partially occupied; then he endorsed Putin’s strategic aim. Trump hurt himself this week, and he hurt Ukraine—but somehow he managed to hand Putin a beautiful gift.