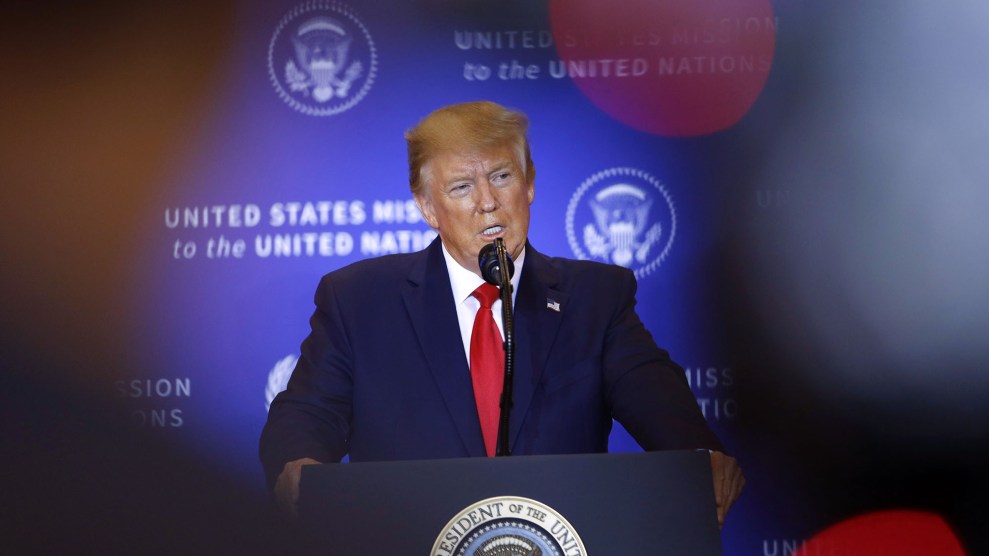 The whistleblower complaint that spurred fresh calls for impeachment was released Thursday morning, revealing yet another bombshell allegation: White House officials abused a classified information system to hide the transcript of President Donald Trump’s incriminating July phone call with the Ukrainian president. Worse, the whistleblower says he was told this was “not the first time” the system had been abused under Trump to hide politically sensitive information. The allegation, along with other emerging information, suggests fallout from the developing scandal could reach deep into the White House, its counsel’s office, and the national security apparatus.

According to the complaint, White House lawyers ordered that the transcript, which records Trump pressuring President Volodymyr Zelensky of Ukraine to conduct investigations that would benefit his political messaging, be stored in a special classified database managed by the National Security Council. Even though the transcript did not contain the kind of classified information usually held in that system, the move ensured many fewer officials would have access to this word-for-word record, which the whistleblower viewed as an acknowledgement that officials knew it documented an abuse of power that needed to be covered up. The president’s actions are likely a crime.

The whistleblower complaint explains the situation:

White House officials told me that they were “directed” by White House lawyers to remove the electronic transcript from the computer system in which such transcripts are typically stored for coordination, finalization, and distribution to Cabinet-level officials.

Instead, the transcript was loaded into a separate electronic system that is otherwise used to store and handle classified information of an especially sensitive nature. One White House official described this act as an abuse of this electronic system because the call did not contain anything remotely sensitive from a national security perspective.

The complaint’s annex includes the whistleblower’s accusation that the decision to put the July call’s transcript into the classified system was only the latest instance in which it had been used to avoid scrutiny. “According to White House officials I spoke with, this was ‘not the first time’ under this Administration that a Presidential transcript was placed into this codeword-level system solely for the purpose of protecting politically sensitive—rather than national security sensitive—information,” the complaint states.

The revelation raises serious questions that go beyond the central core of the still-developing Ukraine scandal, and threatens to envelop multiple White House officials and lawyers. Not only could such officials face repercussions for abusing the classification system, the documents they improperly filed, if revealed, could contain a wealth of information on embarrassing or illegal administration actions.