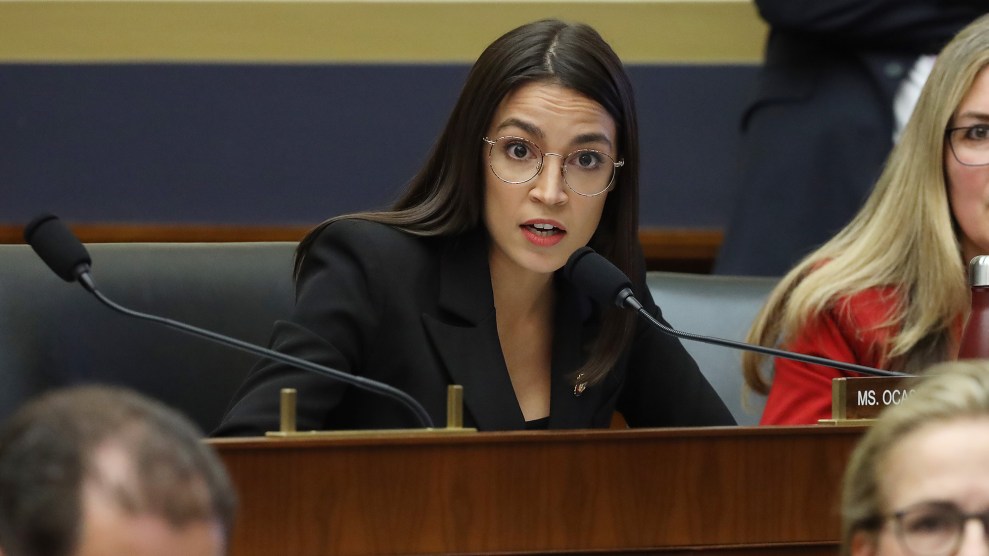 During his congressional testimony on Wednesday, Facebook CEO Mark Zuckerberg tried to side-step responsibility for partnering with the conservative media site, the Daily Caller, giving an at-best misleading answer to a pretty direct question from Rep. Alexandria Ocasio-Cortez (D-NY).

Ocasio-Cortez asked Zuckerberg why Facebook partnered with “the Daily Caller, a publication well-documented with ties to white supremacists, as an official fact-checker for Facebook.” Her question refers to the organization’s history of employing people like Scott Greer, a deputy editor who had previously written for a white supremacist publication, and of running articles from prominent white supremacists like Jason Kessler and Peter Brimelow.

“We actually don’t appoint the independent fact-checkers,” Zuckerberg responded. “They go through an independent organization called the Independent Fact-Checking Network, that has a rigorous standard for who they allow to serve as a fact-checker.”

“So you would say that white supremacist-tied publications meet a rigorous standard for fact-checking?” she asked skeptically.

Zuckerberg again dodged, once more deferring to the outside organization.

This is a WILD exchange. The last two questions at the end made me gasp. @AOC: "So you would say that white supremacist tied publications meet a rigorous standard for fact checking?" Watch how Mark Zuckerberg responds.pic.twitter.com/tHKKu7VTVU

While the International Fact-Checking Network (IFCN), a unit of the Poynter Institute for Media Studies, does make determinations as to who makes it into the pool of Facebook’s fact-checkers, the platform makes its own choices about which IFCN organizations actually get to fact-check the articles shared—a detail  Zuckerberg conveniently left out.*

Vox’s Aaron Rupar explained the Facebook fact-checking process back in May:

All the fact-checkers Facebook partners with are certified by Poynter’s International Fact Checking Network (IFCN). Poynter evaluates applicants based on a set of criteria including “nonpartisanship and fairness,” “transparency of sources,” “transparency of funding and organization,” “transparency of methodology,” and an “open an honest corrections policy.”

IFCN certification is a necessary condition for partnering with Facebook, but once a site is certified, it’s up to Facebook to decide whether to partner with it. There are currently 62 organizations with IFCN certification globally, but Facebook only partners with six in the United States.

What’s particularly interesting about Zuckerberg neglecting to mention Facebook’s responsibility here is that, according to the Wall Street Journal, Zuckerberg was directly involved in discussions with Facebook vice president and former George W. Bush staffer Joel Kaplan about whether or not to include the Daily Caller:

This summer, Mr. Kaplan pushed to partner with right-wing news site The Daily Caller’s fact-checking division after conservatives accused Facebook of working only with mainstream publishers, people familiar with the discussions said. Conservative critics argued those publications had a built-in liberal bias.

Mr. Kaplan argued that The Daily Caller was accredited by the Poynter Institute, a St. Petersburg, Fla.-based journalism nonprofit that oversees a network of fact-checkers. Other executives, including some in the Washington, D.C. office, argued that the publication printed misinformation. The contentious discussion involved Mr. Zuckerberg, who appeared to side with Mr. Kaplan, and Chief Operating Officer Sheryl Sandberg. The debate ended in November when The Daily Caller’s fact-checking operation lost its accreditation.

So yes, Facebook doesn’t accredit its fact-checkers, but, as Zuckerberg knows, it does pick them.

Correction: The original version of this article misstated the IFCN’s name.