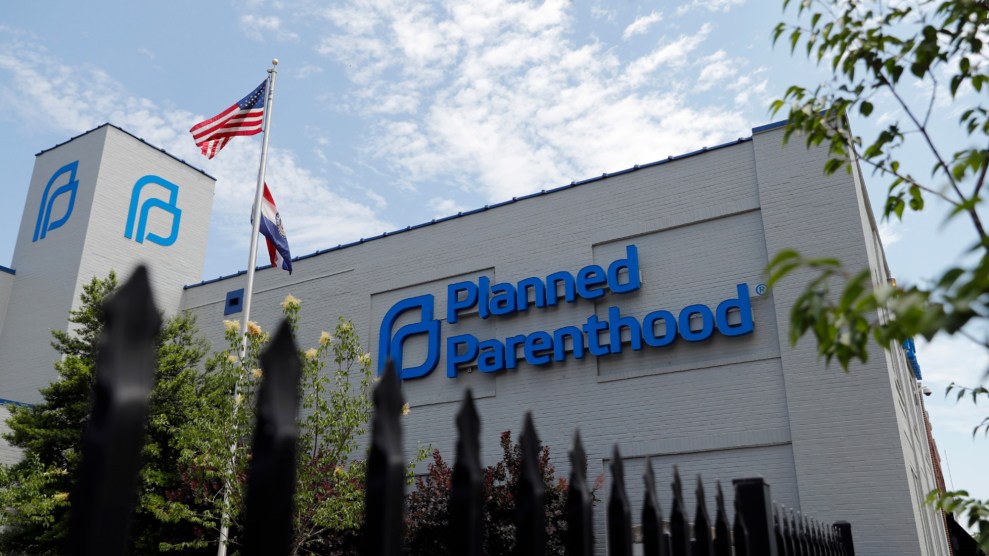 In this June 4, 2019, file photo, a Planned Parenthood clinic is photographed in St. Louis.Jeff Roberson/AP Photo

As abortion rights continue to be under attack by the Trump administration and in states across the country, Planned Parenthood announced a new campaign on Wednesday focused on the 2020 elections. In their most ambitious electoral push ever, the organization plans to spend $45 million backing 2020 candidates in local, state and national elections. This is $4 million more than nation’s largest anti-abortion group the Susan B. Anthony List pledged to spend in the 2020 cycle back in June and $15 million more than it deployed during the 2016 elections.

“Next November, our very rights and freedoms will be on the ballot,” Kelly Robinson, Executive Director of Planned Parenthood Votes said in a statement announcing the plan. “Who we elect will determine our access to birth control, cancer screenings, sex education, abortion access and more.”

The group plans to target five million voters nationwide with a focus on mobilizing communities they say are most affected by the Trump administration’s policies including “Black and Latinx people, the LGBTQ+ community, youth, and people with low incomes.” Planned Parenthood has also launched a Candidate Spotlight tool, which will give voters information on the reproductive rights records of 2020 presidential candidates on issues such as abortion access, birth control, and sex education.

The timing of this announcement takes place one week after the Supreme Court decided to take-up its first major abortion case, June Medical Services v. Gee, since adding two conservative Justices, Neil Gorsuch and Brett Kavanaugh, to the court. The case focuses on a 2014 Louisiana law that requires doctors who perform abortions to have admitting privileges at a local hospital, and is nearly identical to a Texas law, which the Supreme Court deemed unconstitutional in 2016. As I reported earlier this month, legal scholars see this case as potentially having a major impact on abortion access:

If the majority of justices decide to uphold the Louisiana law, they could do so in one of two ways. “If the court ruled…that Whole Women’s Health [the 2016 case] is still good law but is applied [differently] from state to state…that’s a setback for abortion rights, but it may not to be a devastating one,” explains Stephen Wermiel a professor of constitutional law at American University. But, he adds, “if the court overruled Whole Women’s Health, that would be devastating.”

Although a lot of attention has been paid to the rash of bills earlier this year banning abortion in states like Alabama, Louisiana, and Missouri, Tu argues that restrictive laws like admitting privilege requirements can do just as much, if not more, damage.

“The public imagination is so captured by all of the abortion bans that have been enacted, but it is cases like ours that are a much greater threat to abortion access,” says Tu. “In states like Louisiana, they are going to effectively make abortion completely out of reach before the Supreme Court ever has the chance to take up the question of Roe v. Wade.”

The fact that this case is on the docket during an election year, with the Supreme Court’s decision likely to come out in the summer of 2020, brings even more attention to abortion rights in the upcoming presidential election. Planned Parenthood has been especially targeted by he Trump administration. In August, the Department of Health and Human Services issued a domestic gag rule on the Title X program—the nation’s only comprehensive reproductive health care program, which was enacted in 1970 by Richard Nixon—and blocked organizations who received Title X funding from offering or referring patients for abortion services. The decision prompted Planned Parenthood, which served roughly 41% of all Title X patients, to leave the program and relinquish over $60 million in funding.

“Planned Parenthood Votes will use every tool at our disposal to hit the pavement, hit the airwaves, and elect reproductive rights champions up and down the ballot,” said  Robinson in a statement. “We know this is a fight we can win.”