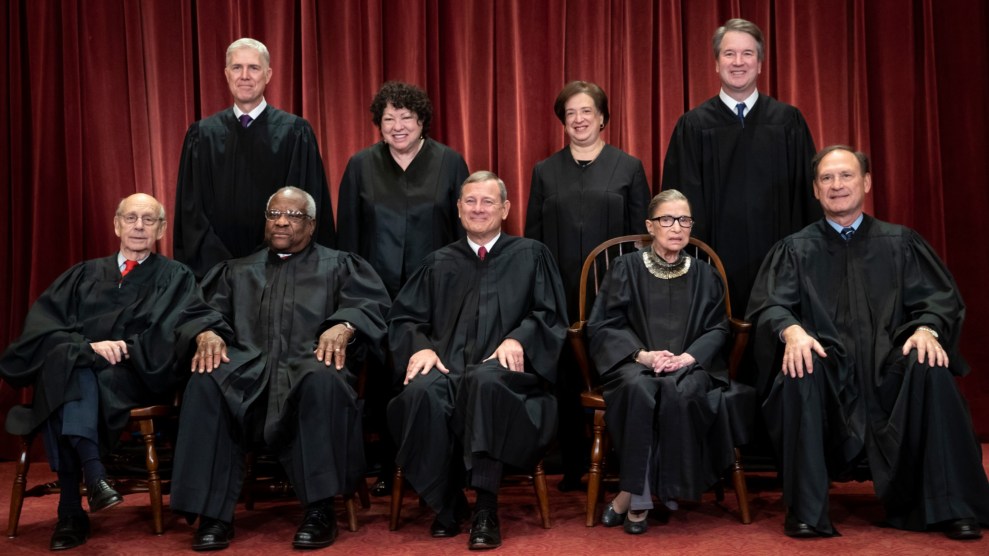 The justices of the U.S. Supreme Court gather for a formal group portrait to include the new Associate Justice, top row, far right, at the Supreme Court Building in Washington, Friday, Nov. 30, 2018. J. Scott Applewhite/AP Photo

The Supreme Court decided Friday to hear June Medical Services v. Gee, a Louisiana case that could greatly restrict abortion access across the country and overturn a previous ruling on the issue.

The case concerns a 2014 Louisiana law requiring doctors who perform abortions to have admitting privileges at a hospital within 30 miles of their facility. If this sounds familiar, it’s because the law is nearly identical to a Texas statute that also required abortion providers to have admitting privileges at local hospitals. The Texas law was ultimately deemed unconstitutional by the Supreme Court in 2016. Despite that precedent, the 5th Circuit Court of Appeals decided to uphold the Louisiana law in the face of a challenge by abortion providers, and in February, the Supreme Court agreed to temporarily block Louisiana’s law pending a final decision.

As Mother Jones reported in March after the Supreme Court first made temporarily halted the Louisiana law:

The…law will shutter three of the four clinics left in Louisiana. This means that for many women, the closest option will be the clinic in Jackson, Mississippi, which is the only clinic remaining in Mississippi, where strict abortion regulations took the number of clinics from 14 in 1981 to just 1 in 2012.

The Louisiana law, which was signed by Gov. Bobby Jindal in 2014, requires physicians who perform abortions to have “active admitting privileges at a hospital that is located not further than thirty miles from the location at which the abortion in performed.”

Attorneys for the abortion providers who would be affected argue that the precedent established by the earlier Texas case is clear and that the Louisiana law is therefore obviously unconstitutional. But one major difference between the 2016 decision and the current case is the composition of the court. Since 2016, President Donald Trump has appointed two conservative Justices—Brett Kavanaugh, and Justice Neil Gorsuch—who are both believed to be hostile to abortion rights. In February, Kavanaugh dissented from the majority decision to temporarily stay the law until the court could make a final decision on the merits.

TJ Tu, an attorney for the Center for Reproductive Rights, who is representing one of the abortion clinics and two physicians impacted by the case, is hopeful that despite the new justices, the Supreme Court will uphold the 2016 precedent.

“Our view is that the makeup of the court should not alter the requirements of the constitution,” says Tu. “Because our case is so clearly controlled by an existing precedent, we’re confident that all of the Justices and certainly a majority could easily reach a decision in our favor.”

If the majority of justices decide to uphold the Louisiana law, they could do so in one of two ways. “If the court ruled…that Whole Women’s Health [the 2016 case] is still good law but is applied [differently] from state to state…that’s a setback for abortion rights, but it may not to be a devastating one,” explains Stephen Wermiel a professor of constitutional law at American University. But, he adds, “if the court overruled Whole Women’s Health, that would be devastating.”

Although a lot of attention has been paid to the rash of bills earlier this year banning abortion in states like Alabama, Louisiana, and Missouri, Tu argues that restrictive laws like admitting privilege requirements can do just as much, if not more, damage.

“The public imagination is so captured by all of the abortion bans that have been enacted, but it is cases like ours that are a much greater threat to abortion access,” says Tu. “In states like Louisiana, they are going to effectively make abortion completely out of reach before the Supreme Court ever has the chance to take up the question of Roe v. Wade.”

For conservative justices who might be unsure whether or not they want to overturn Roe, going after Whole Women’s Health could be an easy way to erode abortion rights, argues Wermiel.

“If you believe Roe and Casey [a 1992 case reaffirming abortion rights] were wrong and that the Constitution doesn’t protect the right to abortion, but you’re not sure whether you…are prepared to go that far,” he says, “this an easy first step.”