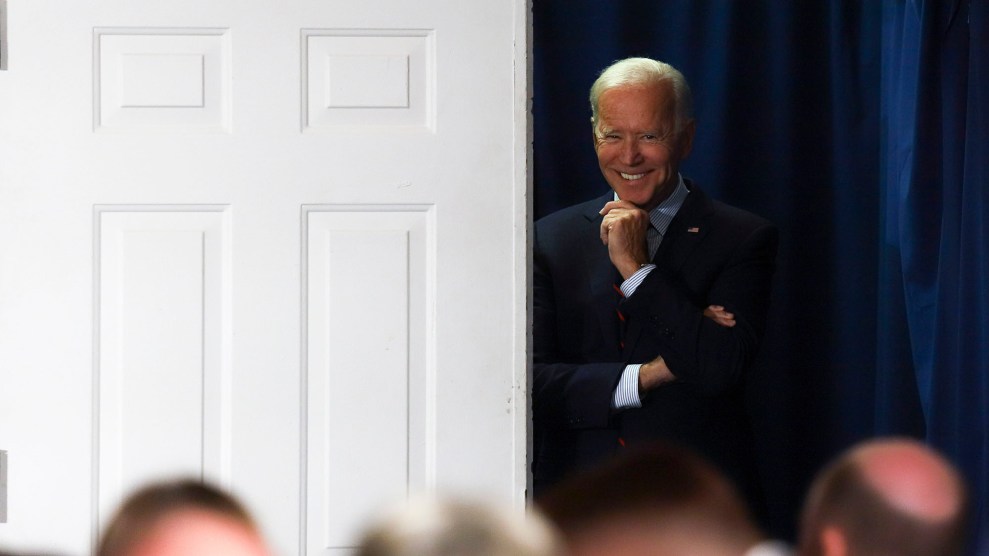 Since late April, when the former vice president kicked off his campaign with a rally in Pittsburgh, the Democratic presidential primary has revolved around Joe Biden. He led every national poll for months and was the centerpiece of every debate stage he appeared on. A procession of younger challengers took turns trying to draw blood—Eric Swalwell, Kamala Harris, Cory Booker, Julian Castro. Over the last month, Biden’s centrality to the race has taken on a new dimension, as the House of Representatives investigates whether President Donald Trump committed an impeachable offense in asking the government of Ukraine to investigate Biden and his son, Hunter.

But for most of Tuesday’s debate in Ohio, Biden was largely an afterthought. Instead, Elizabeth Warren—who has recently overtaken Biden in a number of polls—dictated the terms of the debate. Over the first half of the debate she talked twice as much as Biden, and, somewhat relatedly, was also talked about by everyone else. South Bend Mayor Pete Buttigieg went after her on Medicare for All. Minnesota Sen. Amy Klobuchar tried to pick a fight with Warren over the Massachusetts senator’s proposal for a wealth tax. Hawaii Rep. Tulsi Gabbard twice tried to use her time to get into a one-on-one debate with Warren on foreign policy. California Sen. Kamala Harris tried—for a surprisingly long time—to get Warren to sign onto her letter asking Twitter to delete Trump’s account. (No dice.)

Warren’s public statements and policy proposals were also the impetus for questions that the moderators directed to other candidates—Andrew Yang, for instance, was asked about her position on breaking up tech companies. In a campaign, you make a name for yourself by going after the biggest figure on stage. And for one night at least, there was no bigger figure than Warren.

It was only in the debate’s waning minutes that Biden began to assert himself more forcefully. Asked about the appeal of the populist message of Warren and and Bernie Sanders, Biden insisted that some of his opponents were being too vague—“you’ve got to level with people!”

“I’m the only one on this stage who’s gotten anything really big done,” Biden continued, rattling off a list of legislative accomplishments. “The question is who’s gonna be able to get it done?”

“Who do you think is being vague?” CNN moderator Anderson Cooper asked.

Biden held out his hand toward Warren, and then thought better about it, and added in Sanders, too. “Both of them are being vague on the question of Medicare for All.”

A short while later, when Warren touted her work in creating the Consumer Financial Protection Bureau, Biden was indignant. “I went on the floor and got you votes,” he said, referring to the law creating the bureau. What did the Warren have to say to that?

“I am deeply grateful to President Obama, who fought so hard to make sure that agency was passed into law” she began, very pointedly. Biden broke into a huge grin at the omission. He’d been erased from his own administration.

At a stunning moment during Tuesday's debate, former Vice President Joe Biden interrupted Sen. Elizabeth Warren to say how he "convinced people" to vote for her proposal to create the Consumer Financial Protection Bureau.

It was all very awkward. pic.twitter.com/9SftvOizBS