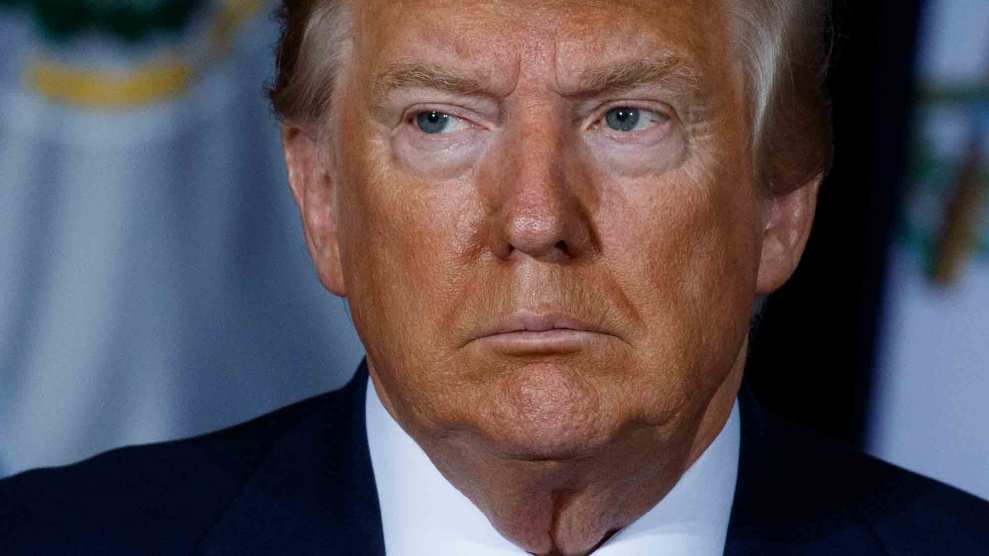 It’s been a long-standing question: Does Donald Trump believe his own crap? Does he truly think he has the best brain, that he is worth more than $10 billion, that there were more than a million people at his inauguration? And, in particular, does he accept the crazy conspiracy swill he so often slings: Barack Obama was born in Kenya, millions of undocumented immigrants voted illegally in the 2016 election for Hillary Clinton (which is why he did not win the popular vote), Ted Cruz’s dad killed JFK? It could be that Trump spews falsehoods, exaggerations, and ludicrous tales mainly for effect. He knows this stuff is bunk, but he tosses it out to gain an advantage—to pump up his image, to feed his political base, to shape the political discourse, to distract from his own misdeeds. But what if he actually does believe this rubbish? Which would be more alarming: a president who is a serial liar or a president who is delusional?

The Trump-Ukraine scandal has revealed much about its chief player, who comes across as a crass operator in his phone call with Volodymyr Zelensky, as Trump abuses the power of the presidency to muscle the Ukrainian leader into producing dirt that Trump can use for his own political purposes. But the quasi-transcript of this Godfather-like chat also answers the question posed above—and that answer is damn frightening.

As just about everyone now knows, during that July 25 call, when Zelensky told Trump that Ukraine wanted to obtain more Javelin anti-tank missiles from the United States, Trump immediately replied, “I would like you to do us a favor though.” He then, in his word-salad way, asked Zelensky to investigate the theory that the Democratic Party computer servers that were hacked by the Russians in 2016 supposedly ended up in Ukraine, as part of a grand plot to create a hoax Trump-Russia investigation to block Trump’s path to the White House. (Trump was hardly this coherent in making his request to Zelensky.) Referring to Robert Mueller’s investigation into Russian election interference, Trump said, “They say a lot of it started with Ukraine,” and he noted  it was “very important” for Zelensky to investigate. Zelensky agreed to follow this path and pointed out that one of his assistants had already spoken about this to Rudy Giuliani, Trump’s chief henchman.

To be fair, you have to possess some background information to realize how bonkers this part of the conversation was. Trump was talking about one of the nuttiest conspiracy theories related to the Russia scandal—and he and his defenders have come up with a lot of bizarro alternative realities in their strenuous efforts to protect Trump. The basic theme they have been pushing for years is that Trump was set up by some Deep State cabal involving various US law enforcement and intelligence agencies, the Obama White House, the Democrats, the Hillary Clinton campaign, and, of course, the media (including me)—all of whom helped concoct a phony Russia investigation to delegitimize and stop Trump. And during his conversation with Zelensky, Trump zeroed in on one of the craziest variants of this favorite Big Idea of Fox News and the paranoid right.

Immediately after the Democratic National Committee in June 2016 revealed that its computer servers had been infiltrated and that a cybersecurity company called CrowdStrike had determined the hackers were Russian operatives, right-wing websites and chat groups began challenging this idea and promoting other scenarios. They focused on CrowdStrike, and eventually the theory emerged that the DNC was not infiltrated by the Russians and that CrowdStrike had moved the servers (which held the proof!) to Ukraine to prevent the FBI from inspecting them and learning the truth. (This theory overlapped with the debunked conspiracy theory that a young DNC staffer named Seth Rich, not Russia, had obtained the purloined DNC emails and passed them to WikiLeaks. Rich was murdered in an attempted robbery in Washington.) On 4chan and Reddit, Trump devotees advanced this idea that the DNC and CrowdStrike had fabricated the Russian attack. And, not surprisingly, Russian media outlets spread the tale. (BuzzFeed News has detailed this transmission belt of skulduggery.) So there was Trump echoing Russian propaganda and telling Zelensky, “I would like you to find out what happened with this whole situation with CrowdStrike, they say CrowdStrike…I guess you have one of your wealthy people. The server, they say Ukraine has it.”

Of course, in the real world the facts were established by the Mueller probe, two congressional investigations (led by Republicans), and an investigation conducted by the intelligence community: Russia hacked the DNC to steal information it could use in its covert campaign to subvert the 2016 election. (The intelligence community concluded Moscow’s aim was to help Trump become president.) And the FBI had full access to the information that was on the DNC servers. There was no evidence the servers had been hidden from the bureau and transported to Ukraine. Mueller’s investigation and media reporting showed that while the Russians were hacking and plotting against the United States, Trump’s campaign was secretly interacting with Russian intermediaries and Trump was publicly encouraging Moscow’s assault, even as he denied the attack was happening and even as he sought to benefit from it. But if the Trumpers could prove the Russian hack never happened—that this whole story was conjured up by evil anti-Trumpers—everything else would be moot. Trump could not have aided and abetted an attack that didn’t exist, right?

One can see why Trump would want the DNC-servers-in-the-Ukraine story to be true—and why he might cast it out as part of his throw-anything-at-the-wall defense. But to believe this—in the face of every official finding and common sense—is an extreme act.

George, let me just again repeat that it has no validity. United States government reached its conclusion on attributing to Russia the DNC hack in 2016 before…the FBI ever knocked on the door at the DNC. So a server inside the DNC was not relevant to our determination to the attribution. It was made up front and beforehand. And so while servers can be important in some of the investigations that followed, it has nothing to do with the US government’s attribution of Russia of the DNC hack.

More disturbing, Bossert indicated that Trump is prone to believe fantastical and false stories when they match a desire: “I am deeply frustrated with what [Rudy Giuliani] and the legal team is doing and repeating that debunked theory to the President. It sticks in his mind when he hears it over and over again.”

Sticks in his mind—that is scary. A former Trump aide says the president of the United States cannot distinguish between facts and baloney when he wants the baloney. He does indeed believe the nonsense: There is a Deep State conspiracy that orchestrated a witch hunt to destroy him—and, whaddayouknow, the schemers did so at a time when few thought Trump would become president. (Yes, the Deep State was very prescient, but yet so bad at its job.)

This moment reminds me of the release a few months ago of text messages exchanged in 2017 and 2018 by Fox News host Sean Hannity and former Trump campaign manager Paul Manafort. In these missives, Hannity, one of the most prominent proponents of Deep State nuttery on major media, and Manafort reiterate and reinforce the idea that dark forces are arrayed against Trump—and the two of them. Hannity tells Manafort that he fears the “establishment” wants to kill Trump and has engaged in “unreal corruption” to undermine his presidency. (That corruption consists mostly of the Trump-Russia investigation, including the prosecution of Manafort.) In this private conversation, Hannity lists the enemies, and, in fact, they match the foes he rails against on a nightly basis: “Deep State, Dems, Media, Weak Pathetic Rs, Never trumper[s].” Hannity refers to the “Comey Clinton mueller crime” family. And Manafort gushes, “You are so important to protecting our Constitution.” These Trump men do seem to see themselves as manning the ramparts against a nefarious and powerful secret coup. Hannity is not just saying this in prime time to sell ads.

It’s easy to dismiss Trump’s BS as, well, just BS. After all, Trump will publicly say anything to escape responsibility, change the subject, or cover up misconduct. He will claim an improper call was “perfect.” He will call for the arrest of a Congress member for treason. He will deny what he said an hour ago. An outrageous or offensive remark is often his best defense. But when he was speaking to Zelensky, he was not in front of an an audience (real or virtual). In private, he was expressing a priority and making a specific ask (or demand). And that focused on Zelensky producing information to confirm an utterly batty idea. Yet Trump regards this absurd idea as true. Why? Because he wants to. Because he needs it to be real. Because he does not care about reality. It was one thing for Trump to push Zelensky to come up with muck on Joe Biden and his son. That sort of material was within the realm of possibility (and it could probably be made up, if it doesn’t exist). But to concentrate on the servers conspiracy theory? This transcript shows that Trump is a prisoner of his own self-deception, a man untethered from the world of facts. It might be more reassuring if he was only an inveterate liar.