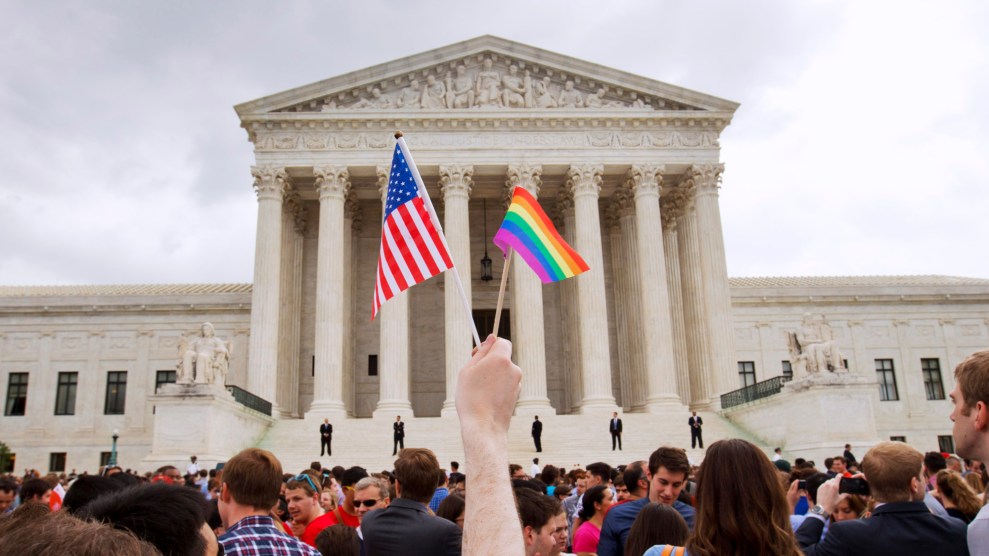 The Supreme Court is hearing oral arguments on Tuesday for three cases that seek to expand employment protections to LGBTQ people.Jacquelyn Martin/AP

On May 4, 2016, Mark Horton signed the paperwork to make it official: He would soon be the vice president of sales and marketing at Midwest Geriatric Management. He resigned from his job at a competing health care company and went about collecting documents needed for his onboarding. All was going smoothly until Horton hit a bureaucratic snag getting copies of his college transcripts and diplomas.

Two weeks after he accepted the offer, Horton emailed his new boss, a woman named Faye Bienstock, to update her on those educational records. He promised they were coming, and mentioned that “my partner has been on me about [my MBA] since he completed his PHD a while back.”

Five days later, Bienstock, according to court documents, emailed Horton withdrawing the job offer. She explained in the email that the change was because of the diploma delay. But Horton has another theory about why the offer was rescinded: MGM didn’t want a gay person in the company.

Horton is a resident of Madison County, Illinois, where state law prohibits employment discrimination on the basis of gender identity or sexual orientation. But the MGM office is just across the Mississippi River in St. Louis, Missouri, where no such protections exist.

Horton still sued MGM, arguing that, under federal law, it’s illegal for employers to discriminate against gay employees. A lower court dismissed the case, and it is now pending before the Eighth Circuit Court of Appeals. If it succeeds, Horton’s suit could overturn the circuit court’s precedent excluding gay people from federal employment protections. Whether it will largely depends on three other, similar cases, currently being considered by the Supreme Court.

All three of the cases, which are being argued in front of the Supreme Court on Tuesday, involve LGBTQ people who say they were fired because of their sexual orientation or gender identity. Aimee Stephens, a transgender woman from Michigan, was fired from her job at a funeral home in 2013 after she informed her boss that she was transitioning and intended to begin dressing according to the company’s dress code for women. The Sixth Circuit Court ruled in Stephens’ favor, but the funeral home’s appeal brought the suit to the high court. The other two cases involve gay men who, like Horton, were dismissed after coming out at work.

Lawyers from the ACLU and other advocacy groups representing the plaintiffs are arguing that gay and transgender people are protected under Title VII of the Civil Rights Act, which says employers aren’t allowed to discriminate on the basis of sex, race, color, national origin, or religion. Sexuality and gender identity discrimination, the lawyers say, is a form of sex discrimination. Tuesday’s oral arguments mark the first time the Court has considered this question.

If the court agrees that sexual orientation and gender identity fall under Title VII, all workers, both public and private, would be protected from anti-LGBTQ workplace discrimination. A ruling in the opposite direction wouldn’t overturn state employment protection laws, since those by and large don’t mention Title VII explicitly. But it could open the door even more to state-level attacks on LGBTQ people in the workplace.

“The Trump administration has indicated that it plans to really roll back protections, especially for trans people,” said Gabriel Arkles, who is on the ACLU team representing Stephens. “And so if the Supreme Court rules the wrong way here, then it would really green light that.” Arkles also worries that employers will be emboldened to fire queer people. “Even in states where a law says that it’s illegal, employers might be confused and we just might see a lot of people losing their jobs in the immediate aftermath of a bad decision.”

And then there are the local ordinances. More than 300 city and county governments have passed laws that ban LGBTQ discrimination in employment, housing, and more. But experts warn they’re difficult to track and it’s almost impossible to know which ones are actually enforced.

If the court decides those two categories aren’t protected under Title VII, federal enforcement directives would also be nullified. For example, the Equal Employment Opportunity Commission has issued multiple decisions that interpret Title VII to include sexual orientation and gender identity under the definition of sex. The EEOC already receives more than 1,000 “LGBT-based sex discrimination charges” each year. Still, almost 70 percent of the cases closed last year were dismissed for “no reasonable cause.” Depending on the Supreme Court’s decision, the EEOC may not investigate such claims in the future.

For people like Mark Horton—the Illinois man who lost his job offer—the consequences of the Supreme Court’s decision are a lot less abstract. Just days after his lawyer, Gregory Nevins, argued his case, the high court announced that it was taking up the three landmark LGBTQ employment discrimination cases. The circuit court decided to hold off ruling on his case until the Supreme Court hands down its decisions.

“If his employer had been in Illinois, he would probably already have a resolution to this discrimination claim,” Nevins said. “But because it’s in Missouri, it’s been a few years now and nothing.”