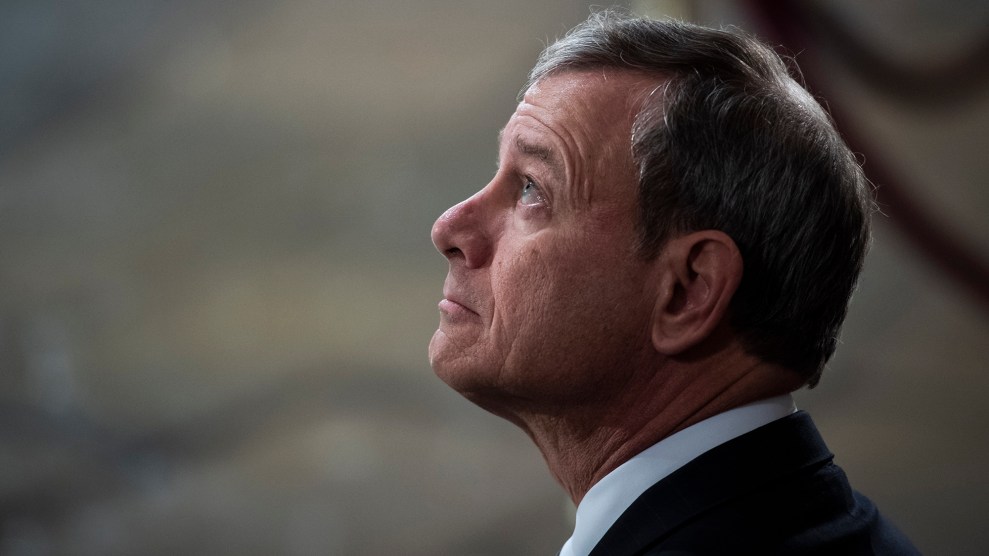 Congressional Democrats and President Donald Trump are in a stand-off over impeachment, with Democrats requesting documents and interviews from the executive branch and the administration defying those requests by citing executive privilege and declaring Congress’ investigations invalid. It’s a constitutional clash with one all-but-inevitable end point: The Supreme Court.

In order to conduct an impeachment inquiry and come to a decision about whether Trump has committed offenses unbefitting of his office, Congress needs to consider evidence. In an inquiry focused on Ukraine, it would need testimony from individuals involved in diplomacy there and others at the White House. But the administration is stonewalling by blocking witnesses and ignoring subpoenas by asserting the president has a right to confidentiality in his conversations with advisers, and more broadly alleging that the House’s impeachment investigation is an unconstitutional political vendetta.

When a Congress taking up impeachment runs headlong into a president claiming executive privilege, which side prevails?

Before the Ukraine scandal erupted, lawsuits over Congressional subpoenas seeking documents and testimony—some filed by Congress, others by the Trump administration—were already working their way through the courts. With an impeachment investigation now underway, the courts are facing unsettled constitutional questions. When a Congress taking up impeachment runs headlong into a president claiming executive privilege, which side prevails? When a Congress performing oversight runs into a president who claims that oversight is a fraud, who wins?

In almost every scenario, the president can expect victory. Even if he loses these cases at the Supreme Court, it may only be after a long judicial process that could run out the clock on impeachment, perhaps even past the 2020 elections. Even better for Trump would be if the court, guided by Chief Justice John Roberts, creates new precedent protecting the president, or decides the judicial branch shouldn’t get involved in impeachment decisions—a win by default that would allow Trump to continue to stonewall.

“There is no case of the Supreme Court that discusses the ability of the Congress to secure documents and testimony from the White House during an impeachment,” says Saikrishna Prakash, an expert on presidential authority at the University of Virginia School of Law. It’s unclear if the courts will view impeachment as altering the calculus in deciding cases that are fundamentally about the balance of power between two branches of government. The administration announced Tuesday that in addition to executive privilege claims, it would not cooperate with Congress’ impeachment inquiry, arguing that the probe itself is constitutionally invalid, a claim it is also making in a lawsuit against the House Ways and Means Committee’s attempt to obtain Trump’s tax returns. The brewing battle over Congress’s requests could give Roberts, a conservative on a right-wing Supreme Court that is generally friendly to executive power, a chance to decide the question in a way that could hand a victory not only to Trump, but to future presidents.

During the Watergate investigation, the Supreme Court played a critical role by ordering President Richard Nixon to turn over tapes of his conversations to the special Watergate prosecutor—a decision that ultimately lead to Nixon’s resignation. But that case was not technically about impeachment; while Congress was simultaneously pursuing impeachment, the battle for the tapes pitted Nixon against the prosecutor. The question the court decided in that case was that a criminal probe outweighed executive privilege.

While Prakash suggests that because “impeachment is more important than criminal punishment,” the court may find that executive privilege “has to give way to the impeachment process as well,” he admits the court could go in another direction. One potential outcome is a holding that the court have no powers to intervene an impeachment investigation, and that the legislative branch’s only recourse is to fold evidence of obstruction into potential articles of impeachment.

“The impeachment context is a two-edged sword,” says Walter Dellinger, a former acting solicitor general during the Clinton administration. “It gives Congress a much broader justification for seeking documents and testimony than other contexts. And so theoretically, Congress is on more solid ground when it is exercising the powers of impeachment.” But, he adds, “it’s possible that courts would be more hesitant to intervene in support of congressional subpoenas in an impeachment context” and instead tell Congress that its quest for documents and testimony is a political battle to be worked out with the executive branch.

During Watergate, the Supreme Court played a critical role by ordering Nixon to turn over tapes of his conversations.

There is some precedent suggesting the court might take such a hands off approach, according to Dellinger, stemming from a 1993 decision involving a former federal judge named Walter Nixon, who had been impeached and removed from the bench for criminal behavior. He sued over the way the Senate conducted his impeachment trial, but in an unanimous decision, the Supreme Court said that it was not the job of the courts to determine how Congress conducts impeachment. “I think the court is going to be hesitant to intervene in an impeachment context,” says Dellinger.

Though Congressional Democrats have yet to sue to enforce the most recent subpoenas related to the president’s request that Ukraine investigate his political opponents, earlier demands for records are already mired in litigation. In federal district court in DC on Tuesday, an attorney representing the House Judiciary Committee as it seeks grand jury material from Robert Mueller’s investigation insisted that the request—which predated the official impeachment inquiry—was now part of that inquiry. The Justice Department has redacted some of the documents that it has agreed to share with the committee on grounds of executive privilege, teeing up a fresh battle between a president’s right to confidentiality and Congress’ authority to investigate. The courts will likely consider this case and other contests over evidence under the umbrella of impeachment.

The Trump administration seems eager to resist all the way to the Supreme Court, as they’ve made bold legal claims about executive power and privilege that seem designed to entice the nation’s highest court to weigh in. In the fight over grand jury testimony in court on Tuesday, for example, the judge seemed surprised when the Justice Department argued that the courts had erred by allowing Congress to see key grand jury testimony during Watergate that was integral to the House’s eventual impeachment resolution.

The strategy appears designed to generate long-running court battles that could help Trump run out the clock. The administration’s attempts to withhold information that isn’t clearly shielded by executive privilege—like the president’s tax returns, grand jury information, and other records—are weak, and courts regularly side with Congress when it comes to enforcing such subpoenas. “On almost any of this stuff, for them to rule in favor of the administration or in favor of Trump… it would require a fairly significant deviation from existing principles,” says Josh Chafetz, an expert on the separation of powers at Cornell Law School.

But a victory on these relatively settled matters wouldn’t matter much if Trump’s lawyers ensure it comes too late for the documents or testimony to be considered for impeachment or by voters ahead of the 2020 election. It took seven years, for example, for House Republicans to win a court battle with the Obama administration over documents involved in the Fast and Furious scandal. If Trump is able to force even weak cases as high as the Supreme Court, that alone could cause a delay long enough for his purposes.

Victory on relatively settled matters won’t matter much if Trump’s lawyers ensure it comes too late.

A pivotal moment in Congress’ impeachment investigation came last week with former special envoy to Ukraine Kurt Volker’s testimony, accompanied by critical Whatsapp messages containing evidence of a quid pro quo that is damning to the president. House Democrats seem to understand that the slow pace of the courts—and the conservative makeup of this Supreme Court—may work against them in forcing future testimony. Last week they informed witnesses, including Rudy Giuliani, that refusal to comply with subpoenas may be included in future articles of impeachment.

Volker’s cooperation with the probe shows such a threat to be a pitiful alternative to actually acquiring documents and testimony. Without more such evidence, lawmakers will be forced to decide to make the serious decision whether to remove a president without a fuller picture of his wrongdoing and to consider moving forward with charges focused on obstruction. But there is already bountiful evidence in Mueller’s final report that Trump tried to obstruct that and other federal investigations, refusing to turn over certain evidence or consent to an interview, yet that did not galvanize action on impeachment.

Chafetz believes that Congress’ best option—particularly given the slow pace of the judicial process—is to use powers that it has thus far refused to consider and attempt to adjust the balance of power between the legislative and executive branches. The Trump administration’s refusal to comply with nearly every congressional request has highlights how the executive branch is expanding its power while the legislative branch has allowed its authority to shrink. “It shows the weakness of Congress when they go running to the courts,” says Chafetz. “The idea that an administration might completely ignore what a house of Congress wants but would never ignore an order from a judge—that too just goes to show the weakness of Congress.”

The author of a recent book on Congress’ enforcement powers, Chafetz argues House Democrats should wield the power of the purse to deny funding for, as an example, the White House counsel’s office. “I’d like to see them be more aggressive on these things,” Chafetz says. Congress also has the power to arrest and jail people it holds in contempt, but it has not arrested an executive branch official in more than a century.

“Congress generally wins these fights” over subpoenas, Chafetz says. “The problem is it always wins way too late to actually matter.”