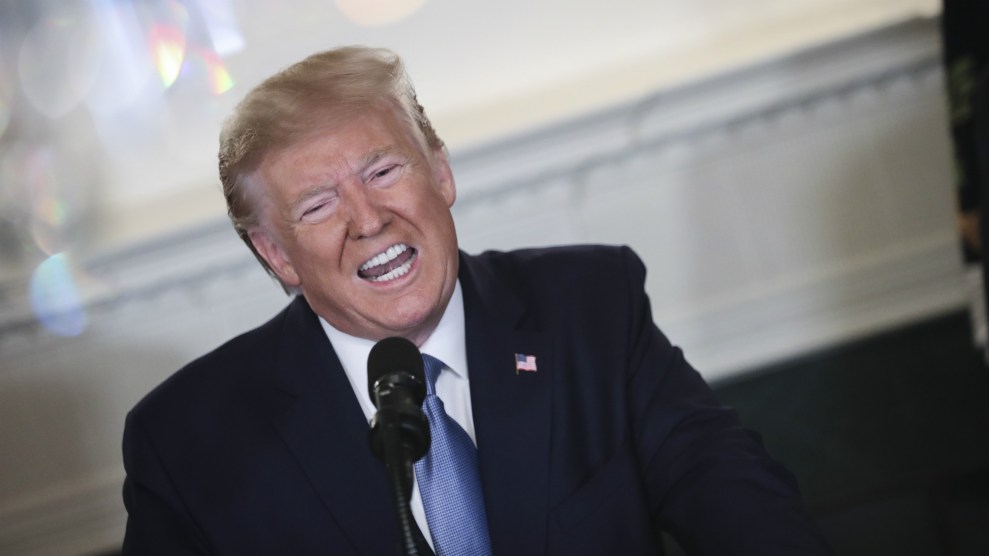 When Donald Trump retreated from his plan to host next summer’s G7 summit at his Doral resort in Florida, that didn’t end the president’s conflict-of-interest problem—not by a long shot. His refusal to divest himself from his business empire means that individuals, corporations, and foreign powers seeking to influence the Trump administration or buy goodwill from the president can pump money directly into Trump’s pockets through his businesses. By visiting his collection of hotels and golf resorts at taxpayer expense—which he has done 387 times during his presidency so far—he has promoted his properties. And Trump has business interests in the United States and around the globe where American economic and foreign policies can have a direct impact on the president’s bottom line.

Trump’s now-abandoned plan to hold the G7 at the Doral—effectively forcing foreign governments to pay him to attend the conference—was perhaps the most egregious case of Trump using his office to advance his personal interests. Yet Trump’s presidency remains riddled with conflicts, big and small.

In light of the ongoing crisis in Syria, Trump’s most pressing conflict of interest at the moment may be the two gleaming towers in downtown Istanbul that bear his name. As is typical for many of his overseas projects, Trump Towers Istanbul is a licensing deal. The property’s owner, Turkish billionaire Aydın Doğan, has a contract to pay Trump annual royalties to use the Trump name. Trump has earned between $3.2 million and $17 million from the project since it opened in 2012, according to his personal financial disclosures. Last year, he made as much as $1 million from the venture.

Because Trump doesn’t own the towers, his name can easily be removed—and his income cut off. That’s not a theoretical threat. In 2015, when then-candidate Trump disparaged Muslims and proposed banning them from entering the United States, both Doğan and Turkish strongman Recep Tayyip Erdogan threatened to remove Trump’s name from the towers. The  episode showed that Erdogan is not afraid to use the property as leverage. As Trump himself conceded in a 2015 interview: “I have a little conflict of interest cause I have a major, major building in Istanbul.”

It has been more than a year since the Saudi government orchestrated the murder of Jamal Khashoggi, a journalist and US resident, likely at the behest of Saudi Crown Prince Mohammed bin Salman. Trump was remarkably soft on the issue, refusing to condemn the prince and praising MBS’s father as “a fine man.” Why soft-pedal? He provided a clue at a 2015 campaign rally. “Saudi Arabia, I get along with all of them,” Trump said. “They buy apartments from me. They spend $40 million, $50 million. Am I supposed to dislike them? I like them very much.”

In 2001, Trump sold the 45th floor of Trump World Tower, across the street from the United Nations, to the Saudi government. More recently, when MBS visited New York last year, part of his entourage stayed at a Trump hotel that saw its struggling revenue numbers surge thanks to the visit.

Then there’s a mysterious project Trump considered launching in Saudi Arabia amid his presidential campaign. In August 2015—on the same day Trump bragged about his condo sales to Saudis—he incorporated a handful of companies with names that suggested he was trying to open a hotel project in Jeddah, the Saudi city that serves as gateway to the Muslim holy sites of Mecca and Medina. Because economic activity in the kingdom is closely controlled by the Saudi royal family, Trump had likely partnered with a well-connected Saudi. The project never came to fruition, and it remains unknown whom Trump was working with in the kingdom—or whether he has plans to revive the venture one day.

Before taking office, Trump promised he would undertake no new international projects to avoid any conflicts of interest with foreign governments. But this did not apply to projects in various stages of development, such as two Trump-branded resorts in Indonesia built by a local media and real estate tycoon named Hary Tanoesoedibjo.

Like Trump, Tanoesoedibjo had political ambitions. He floated a presidential bid in 2014. And in 2015—the same year that Trump partnered with Tanoesoedibjo—the Indonesian developer founded his own political party, the Indonesian Unity Party, saying he was inspired by his relationship with Trump. Tanoesoedibjo has already paid Trump between $2 million and $10 million in royalties for the use of Trump’s name, along with $591,000 in hotel management fees. This spring, Trump sold one of his Los Angeles mansions to Tanoesoedibjo for $13.5 million.

Tanoesoedibjo has bragged about his access to Trump. “If other people have difficulty getting to him, I can do it easily,” he remarked in 2017.

Trump’s flagship Scottish golf course, Turnberry, is iconic—but not profitable. It struggled for years to make money before Trump bought it for $60 million in 2014. Since then, Trump has poured tens of millions into the property and racked up more than $58 million in losses. Turnberry’s remote location means that it is reliant on a small nearby small airport that, aside from being an occasional stopover point for American flight crews traveling to and from Europe, doesn’t get much business. But since Trump was elected, the airport has seen an increase in stopovers and fuel sales to American military flights, and air crews have been shuttled out to Trump’s resort for their overnight stays—a curious move since there are numerous hotels that are both closer to the airport and cheaper. Congressional Democrats investigating the matter have uncovered at least $184,000 in expenditures by the US Air Force at Turnberry, raising the question of whether the US government is subsidizing Trump’s struggling golf club.

Trump’s DC hotel is a monument to the convergence of Trump’s political and business interests. It serves as a kind of clubhouse for DC Republicans and has become a destination for foreign delegations seeking the attention of the White House. Conflicts of interest are practically the glue that holds it together.

To start with, the building the hotel occupies, an old federal post office, is owned by the government, making Trump both the property’s leaseholder and landlord. (The General Services Administration, the federal agency that oversees the property and whose leaders report to Trump, determined this arrangement posed no conflict.)

Starting even before Trump’s inauguration, lobbyists, conservative activists, and foreign dignitaries began descending on the hotel, with some foreign diplomats openly saying they were patronizing the property to win favor with Trump. As we reported:

Anecdotally, foreign governments have flocked to patronize Trump’s DC hotel. An Asian diplomat told the Washington Post, “Why wouldn’t I stay at his hotel blocks from the White House, so I can tell the new president, ‘I love your new hotel!’? Isn’t it rude to come to his city and say, ‘I am staying at your competitor?’” And in January 2017, days after Trump took office, nearly 100 foreign diplomats partied in one of its ballrooms while Kuwait moved its annual National Day celebration from the Four Seasons to Trump’s DC hotel. In a May 2017 filing under the Foreign Agent Registration Act, the government of Saudi Arabia reported spending $270,000 renting rooms at Trump’s DC hotel.

The hotel has spawned a string of lawsuits over just how much foreign governments are spending at the hotel—the Trump Organization and the White House refuse to say—and whether that spending violates the Constitution’s emoluments clause, which prohibits federal officeholders from accepting payments or gifts from foreign governments.

Trump has visited the hotel least 23 times since taking office, according to watchdog group Citizens for Responsibility and Ethics in Washington. Members of his administration have visited the hotel at least 389 times. Meanwhile, Republican campaigns and PACs, including the president’s own reelection campaign, have spent at least $570,000 at the hotel over the course of 229 visits.

For Trump, the ultimate problem may be that he still sees himself as businessman—as opposed to a commander-in-chief whose actions should be free from questions about whether they are being taken with personal gain in mind. On this front, Mick Mulvaney, Trump’s acting chief of staff, made a revealing comment while trying to clean up the mess from the announcement that Trump was going to bring the G7 to Doral. “He was honestly surprised at the level of pushback,” Mulvaney said, adding, “At the end of the day, he still considers himself to be in the hospitality business.”