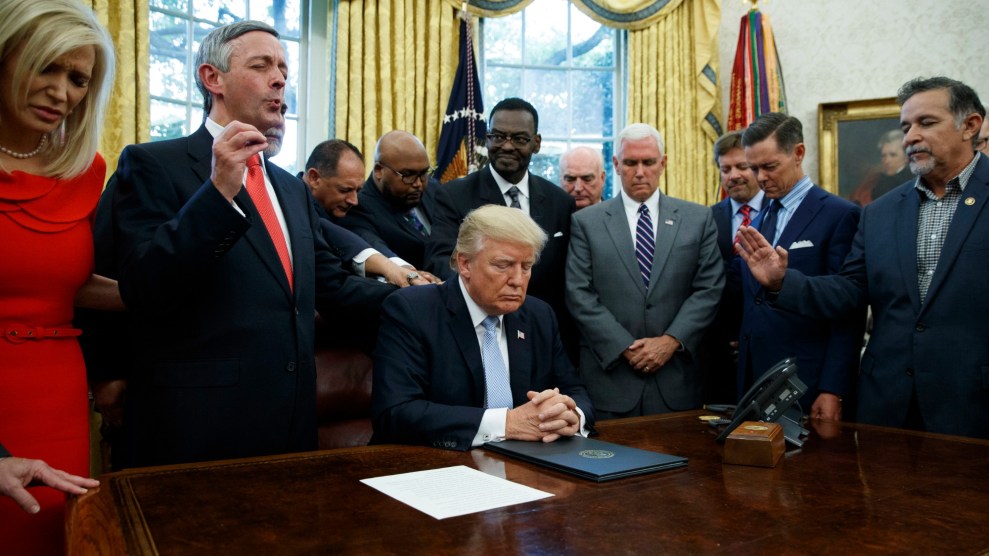 When President Donald Trump appeared on Saturday night at the Values Voters Summit in Washington, DC, he was speaking to an audience of his most loyal supporters. But for the first time in his administration, he had done something that had awakened the long slumbering consciences of prominent evangelical leaders and their flocks. The week before the annual confab of conservative Christians, Trump impulsively decided to abandon the Kurds in Syria, and by the time the faithful had gathered at the Omni Shoreham Hotel, the Turks had already invaded and embarked on the slaughter of our one-time allies.

Throughout his tenure, white, evangelical Protestants have stood firm with the president; he secured 80 percent of their vote in 2016, and their approval of his presidency has hovered between 69 and 78 percent according to the Pew Research Center. In this relationship, the quid pro quo has been pretty obvious: They vote for him and ignore scandals about hush money for porn stars and children in cages. In return, he gives them conservative judges (and not just on the Supreme Court), an assault on abortion rights, jobs for many of their own in key government positions, a move of the US Embassy in Israel from Tel Aviv to Jerusalem, and clarion calls to safeguard a selective and weaponized idea of religious freedom whenever he can—even at the UN.

The first signs of evangelical distress began with 89-year-old Pat Robertson, the Southern Baptist minister, founder of the Christian Broadcasting Network, and evangelical superstar, who appeared on his syndicated program, the 700 Club, the morning after Trump’s announcement. He said he was “appalled” by the decision, concluding “I believe…the president of the United States is in danger of losing the mandate of Heaven if he permits this to happen.”

Soon after Robertson’s admonition, and condemnations from Senate Majority Leader Mitch McConnell (R-Ky.) and Trump acolyte and golfing partner Sen. Lindsey Graham (R-S.C.), the hallelujah chorus of others chimed in. Rev. Franklin Graham, who has been one of the most crawlingly obsequious of Trump’s ministers and had embarked on a thinly disguised political tour dubbed “Decision America” to further solidify support of the president, took to Twitter a few days later:

TODAY I ask that you join me in praying for the lives affected by the White House decision to pull US troops out of northern Syria. Both Democrat & Republican leaders are deeply concerned bc this would be, in essence, abandoning our closest allies there—the Kurdish people. 1/2

The backlash has led to a series of quiet moves by the Trump administration to mollify the religious right, reversing the usual dynamic between the two groups. Instead of Christians being put in the position of rationalizing Trump’s behavior, here was an instance of the Trump White House arraying itself in godliness to stay in their good graces.

So what happened? Why would the fate of a beleaguered minority thousands of miles away embolden right wing evangelicals in a way that the president’s innumerable other transgressions haven’t?

One reason could be found praying over President Trump at the Values Voters meeting on Saturday night. Rev. Andrew Brunson was pastor with the Izmir Resurrection Church in Turkey and has been a cause célèbre for the religious right ever since he was arrested in October 2016 and told that his missionary work was a violation of Turkish national security. He was accused of being a spy for the ethnic Kurds, tried, and initially sentenced to 35 years in prison.

The evangelical community was outraged. One of its own had been persecuted for his religion by Muslims and turned into a geopolitical pawn. After he became president, Trump, with an able assist from his evangelical vice president Mike Pence pushed for Brunson’s release and, eventually, after White House pressure, Brunson was moved out of prison to house arrest. In 2018, Brunson was resentenced to three years in prison, which amounted to time served.

The pastor’s first stop upon his return to the United States was a visit with President Trump, with whom he prayed in the White House. Southern Baptist minister Robert Jeffress—who recently appeared on a Sunday edition of Fox & Friends warning of “a Civil War–like fracture in this nation from which this country will never heal” should the impeachment inquiry be successful—praised the president’s accomplishment: “I join all Americans in sincere thanks to President Donald J. Trump and his administration for their relentless dedication to religious freedom and tough negotiations with Turkey to secure Pastor Brunson’s release today. Yet another example of ‘promise made, promise kept’ by the Trump administration. Praise God!”

“I think it gets to a loyalty and betrayal factor. The celebrity/large cash generating, influential, affinity organizational types place a real premium on loyalty—and often severely punish disloyalty.”

There is another factor at work though, one that is perhaps more difficult for non-evangelicals to fully appreciate. I reached out to an evangelical minister friend of mine and asked what he made of the unexpected criticisms from these leaders. “I think it gets to a loyalty and betrayal factor,” he texted. “The celebrity/large cash generating, influential, affinity organizational types place a real premium on loyalty—and often severely punish disloyalty.” He explained that this occurs within their organizations—not surprising given their authoritarian set up—and has been essential to maintaining their success and prosperity. Indeed it explains their previously unquestioning loyalty to Trump, “because he has delivered on his promises to us: on abortion, pounding on the evil secular, anti-Christian media, elevating our own to cabinet posts.”

But when it comes to the Kurds, “they are known to have helped us win the war in Iraq and succeed in vanquishing ISIS in Syria,” he continued, “so people like Robertson would hold that they deserve our undying loyalty.” An unusual interplay was catalyzed in which Trump sided with Erdoğan, a persecutor of Christians, against the Kurds. He had convinced some of the evangelical leaders that the unsavory world leaders whom Trump has embraced—Putin and Kim most obviously—weren’t really so bad. But Erdoğan was different.

So Mike Pence and Secretary of State Mike Pompeo were deployed to Turkey to try and fix a mess that had clearly gotten out of hand. Again, the choice of these two to carry out the work was intended for both foreign and domestic consumption. They were the highest–ranking members of the administration, so they demonstrated respect to the Turkish president and a capacity to make a deal. At the same time, they are two of the truest believers, themselves prominent evangelical Christians, whose presence was another reminder that the religious right was in good hands with the Trump administration.

There were other reminders too. The homepage of the State Department website, for instance, when the Values Voters were gathering in DC, highlighted Pompeo’s speech to the American Association of Christian Counselors in Nashville, Tennessee. The title? “Being a Christian Leader.”

The same day, Attorney General William Barr stepped up and delivered his own jeremiad at the University of Notre Dame on the subject of religious liberty—a favorite of the Trump administration. He railed against “militant secularists”  who “are not content to leave religious people alone to practice their faith. Instead, they seem to take a delight in compelling people to violate their conscience.” He then spiraled into a passionate critique of secular society, ticking off its “moral chaos” and “irresponsible personal conduct” as well as “licentiousness—the unbridled pursuit of personal appetites at the expense of the common good.” The moral of his story? “Religion helps teach, train, and habituate people to want what is good.”

On October 27, the chaos following the Trump administration’s abandonment of the Kurds will be the subject of a “night of prayer” organized by Frontier Alliance International, a Christian international medical aid organization. “The event will neither be a condemnation nor a defense of President Trump or his Middle East policies,” the organizers write. “We are asking participants to leave partisan politics in the parking lot. We are gathering as Christians to consider and pray about issues that are much larger in scope than the decisions of a sitting President or the evolving dynamics of isolated geopolitical events. We aim to present the big picture, pray how the Lord would have us respond, and catalyze a Kurdish solidarity movement in the United States with the intention of also provoking the international community to do the same.” It will be held at the Trump Hotel in Washington.