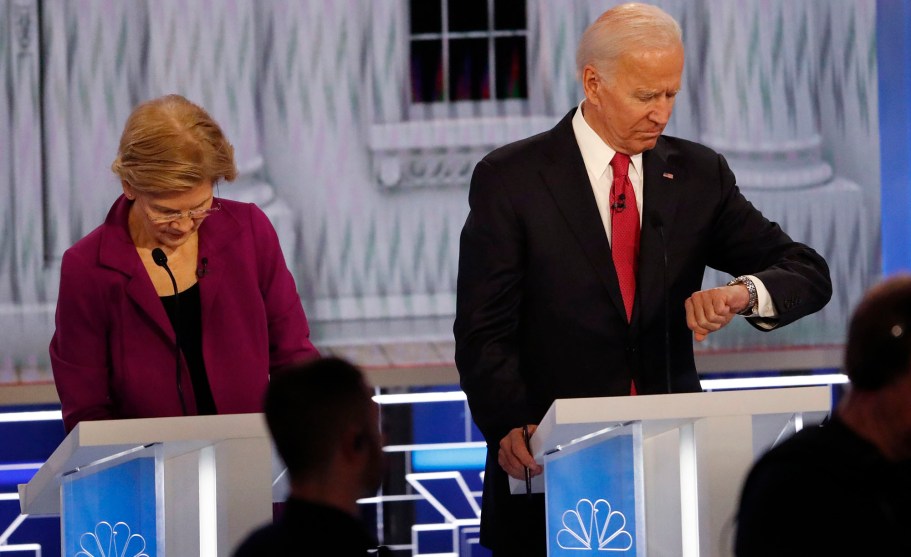 Last night, for the second consecutive debate, Democrats were asked about how they plan to protect the right to abortion care—and they essentially whiffed, using what could have been an opportunity to lay out developed plans of action to merely repeat their bland points from last month.

The most common “solution” Democrats have offered thus far in debates is to codify the rights established by Roe as law, which was repeated by Amy Klobuchar last night. But that answer, while arguably strong in its simplicity and ability to stick in voters’ memories, falls way short, particularly in this current moment. Codifying Roe, as Irin Carmon of New York pointed out on Twitter last night, would necessitate a Democratic majority in the Senate. Currently, Republicans hold the Senate by eight seats (not counting two independent senators who caucus with the Democrats). Should Republicans keep control of the Senate in 2020—which seems likely at this point—it would be next to impossible to pass such a law. So what then, Dems?

We know pretty well that all the candidates support basic access to abortion but it would be great to hear more about how they plan to get there. (Codifying Roe requires controlling the Senate!) Also with state restrictions: what are they going to do about the Roberts Court?

Only Klobuchar, Elizabeth Warren, Bernie Sanders, and Cory Booker discussed abortion rights last night. But the questions were largely about politics, not policy. Warren was asked to specifically comment on the recent reelection of John Bel Edwards, an anti-abortion Democrat, as the governor of Louisiana, and whether there is room for his politics in the party. There was no mention of the impending Supreme Court case out of that state that could do extreme damage to abortion providers in this country; pushing a pissing match over who’s in and who’s out of the party is laughable considering the stakes of reproductive health care here. Sanders, meanwhile, was simply given 30 seconds to, I guess, broadly express his support for abortion rights, which he did. Then Booker made his opportunity to speak to voting rights—which, in fairness, is certainly relevant to how we got here—but he ultimately deflected the conversation away from the matter at hand.

And then it was over.

In this moment, when abortion rights are under severe attack at the state level, and there are two new anti-choice justices on the Supreme Court, such platitudes about codifying Roe and pledging vaguely to protect the right to choose falls pathetically short. It feels as though the candidates are going through the motions when it comes to reproductive rights. This sort of by-the-book answer is simply not good enough amid wholesale bans on abortion passed in states like Alabama and Georgia, not to mention a Supreme Court case regarding admitting privileges that’s on the docket for next year and could decimate the few remaining abortion providers in conservative areas. Responding to questions about abortion—few, far between, and vague though they may be—with canned, obtuse statements seasoned with whatever passion fits that candidate’s brand does not a hero make.

To be clear, it would be naive to suggest that discussing abortion policy isn’t a delicate dance for the candidates. They have to pledge to protect reproductive rights while not alienating moderates for whom abortion is a fraught issue. Still, this moment calls for specificity, creativity, and strong leadership, which has not been on significant display on the debate stage, though it’s worth noting that Warren, Booker, Sanders, Kamala Harris, and Pete Buttigieg are among those with developed plans on their websites. In future debates, it would be powerful to hear the candidates talk more in-depth about the challenge of protecting reproductive rights in a Congress where Republicans are likely to have the ability to block legislation backed by Democrats, or about how they plan to structure the Department of Health and Human Services to protect women’s health care, or anything that shows they are truly invested in this fight.