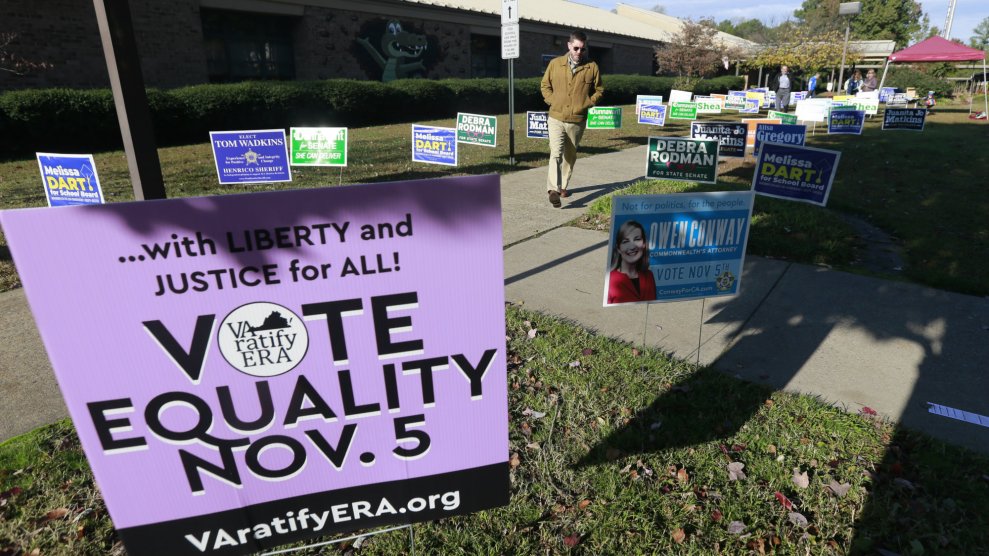 For the first time in more than two decades, Democrats now have full control of Virginia’s state government. According to projections, Democratic candidates have won enough seats in the state Senate and the House of Delegates for majority control of the state’s legislature.

Virginia’s off-off-year state elections drew an unprecedented amount of national attention—and money—as Democratic fundraisers and national progressive groups seized upon the opportunity to flip the Virginia legislature. After the gains Democrats made in the state in 2017, Republicans held only a slim majority in both the state Senate and House. And, thanks to redrawn district maps that favored Democrats in several key districts, that majority was under serious threat, even after a trio of scandals involving the state’s Democratic governor, lieutenant governor, and attorney general.

Democrats needed only one seat to flip the state’s Senate, which they clinched with John Bell defeating Geary Higgins in District 13, a seat vacated by the retiring Sen. Richard H. Black. In the state’s House of Delegates, Democrats won the three they needed to gain control, with wins in District 76, where Clinton Jenkins defeated the incumbent Chris Jones, as well as in District 94, where Shelly Simonds—who lost in 2017 in race that was decided by a coin flip—defeated incumbent David Yancey.

The debate over strengthening the state’s gun control laws was at the center of Virginia’s elections. In the wake of the mass shooting in Virginia Beach in May, in which a disgruntled city employee entered a municipal building and killed 12 people, Virginia Gov. Ralph Northam convened a special legislative session for the sole purpose of passing new gun control measures. But the GOP majority, led by House Speaker Kirk Cox, voted to end the session after just 90 minutes—without passing any bills. In the weeks leading up to the election, polls showed that gun control was the leading issue for voters, and Democrats seized on it as a central aspect of their messaging. The national gun reform group Every Town For Gun Safety and its sister organization, Moms Demand Action, spent $2.5 million to support Democratic candidates in the state.

With the Democrats now in full control of Virginia government, they are finally in a position to push forward several pieces of progressive legislation that’s been held up for years by Republicans. In addition to tougher gun regulations, Democrats hope to enact workplace and housing protections for LGBTQ residents, and a higher minimum wage.