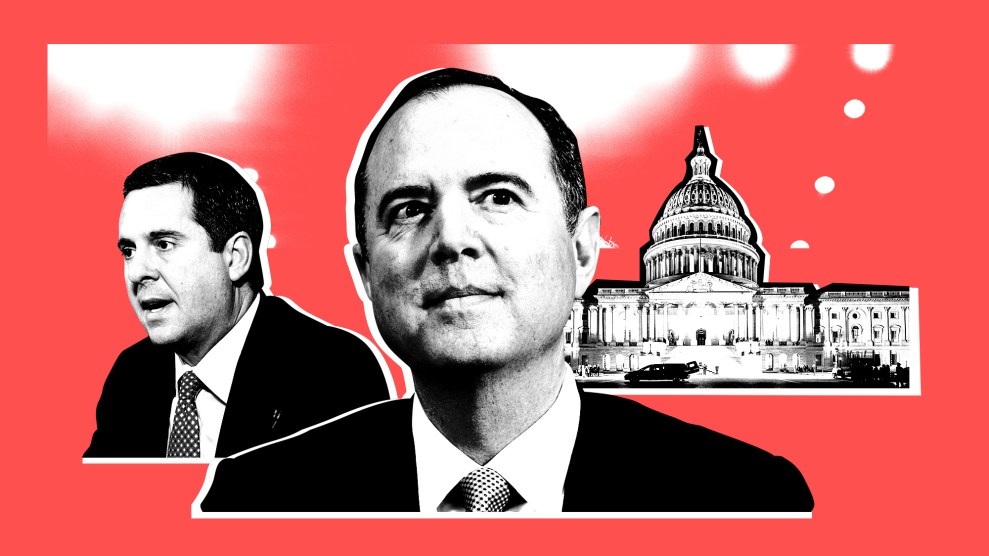 Those are the sort of questions that today’s House Republicans would have asked had they been on the Watergate committee in 1973. That is, they would have displayed no interest in the actual break-in that was part of a wider GOP dirty tricks operation or in the cover-up that was ordered by Richard Nixon. They would have refused to acknowledge that anything improper or illegal occurred and would have demanded that the committee probe the actions of the Democrats that worried Nixon’s reelection campaign and caused it to take unorthodox steps to seek out information about possible Democratic wrongdoing.

On Tuesday, the third day of the House impeachment hearings, the Republicans on the House Intelligence Committee were confronted by witnesses, particularly Lt. Colonel Alexander Vindman, a National Security Council official, who presented unambiguous evidence that President Donald Trump used his office to pressure Ukrainian officials to launch investigations to produce dirt on Joe Biden and prove a debunked conspiracy theory that absolved the Russians of hacking the 2016 US election. Vindman and Jennifer Williams, a State Department official assigned to Vice President Mike Pence’s office, each told the committee that Trump, during his July 25 phone call with Ukrainian President Volodymyr Zelensky, pressed the Ukrainian to initiate these two inquiries and that Burisma—the Ukrainian energy company that Hunter Biden, the former vice president’s son, worked for—was referenced by name. (The reconstructed transcript of the call released by the White House, for some not-yet-explained reason, did not mention “Burisma.”) Vindman also testified about a July 10 White House meeting with Ukrainian officials in which Ambassador Gordon Sondland, who was working with the private channel overseen by Rudy Giuliani, piped up and said that before Zelensky could get a much-desired meeting with Trump, the Ukrainians had to “deliver specific investigations.” Other witnesses have told the committee that the release of nearly $400 million in security assistance that Trump put a hold on was also tied to Ukraine pursuing investigations of the Bidens and the conspiracy theory that holds that Ukraine, not Russia, intervened in the US election.

The Republicans have concocted a dark world in which Trump is an innocent victim. He was the target of foreign intervention in 2016, not the beneficiary; there was nothing to the Russia investigation. And the Ukraine scandal is merely another front in the unrelenting war the Democrats have been waging against Trump.

So it’s as clear as the sky is blue: Trump was muscling the Ukrainians to help him influence the 2020 election and to clear Moscow. The quasi-transcript of the July 25 call even shows Trump saying that if Zelensky wants more Javelin anti-tank weapons, he will have to do Trump the “favor” of kicking off these investigations. (And as Vindman said, considering the power disparity between the two men, this was not a polite request that could be turned down—it was a “demand.”) Yet when Rep. Jim Jordan (R-Ohio), the pro-Trump bulldog recently placed on the intelligence committee by the GOP leadership, had his chance to ask questions of Vindman and Williams, he seized his moment in the sun to declare the sky is green. Or purple. Or whatever. There is no evidence of “linkage,” he thundered. “The transcript shows no linkage…to an investigation.”

But that’s exactly what the transcript shows. You want Javelins? Then we have this favor for you to do—investigations. This is brazen linkage. And there’s now a mountain of testimony linking a White House meeting and the release of the security assistance to Ukraine opening the political investigations Trump craved. But…still…nevertheless, the Republicans on the committee won’t accept this basic reality.

Instead, Rep. Devin Nunes (R-Calif.), the top Republican on the committee, Jordan, and their party-mates have forged an alternative reality in which this controversy is no more than a “hoax” concocted by Democrats and the media and that the focus should be not on Trump’s action but on the whistleblower who initiated the Trump-Ukraine scandal and on the involvement of Hunter Biden in Burisma and the fact-free allegation that his dad took action to thwart an investigation of the firm.

In his opening statement, Nunes depicted a wide-ranging conspiracy of Democrats and mainstream media outlets that first cooked up “the Russia hoax” and then, when that scandal did not lead to Trump’s ouster, devised a whole new bogus Ukraine scandal. In this world, Russia’s attack on the 2016 election (which was mounted partly to help Trump win) does not exist. Rather, Ukraine was somehow the true meddler. (Republicans have repeatedly cited the public anti-Trump statements of a few Ukrainian officials who in 2016 were worried about Trump—and justifiably so, after Trump had said that perhaps Russia should be allowed to keep Crimea, the chunk of Ukraine that Vladimir Putin seized in 2014.) The Republicans were hardly slowed by Vindman’s reality-based statement that the Ukraine-meddled accusation “is a Russian narrative that President Putin has promoted.”

Nunes even exclaimed that the Democratic media conspiracy against Trump included “a concerted campaign” of journalistic organizations “smearing” John Solomon, the writer for The Hill who published a series of stories that disseminated unfounded allegations about the Bidens and former ambassador to Ukraine Marie Yovanovitch. In a bizarre twist, Nunes pointed to the fact that The Hill is now reviewing Solomon’s articles as proof of this sub-conspiracy and an indication this despicable cabal would go to any lengths to prosecute its evil plan.

Nunes declared that what most needed exposing was the whistleblower’s contacts with the media and the Democrats on the committee. He did not explain the relevance of this. But Nunes was suggesting that the whole Ukraine business was manufactured by the Ds and the press—and the whistleblower is the key to uncovering this diabolical plot. The whistleblower’s lawyers have denied on the record that their client has been talking to the media or coordinating with Rep. Adam Schiff (D-Calif.), chair of the intelligence committee, or other Democrats.

Nunes also promoted the never-will-die innuendo that Joe Biden pushed for the dismissal of a corrupt Ukrainian prosecutor to protect his son and Burisma. And there were other insinuations hurled by the Republicans. At one point, they dwelled on an anecdote—a Ukrainian official once asked Vindman if he wanted to serve as defense minister for Ukraine, and Vindman dismissed the offer as a joke—to hint that Vindman, who was born in Ukraine when it was part of the Soviet Union, possessed dual loyalties.

The Rs have concocted a dark world in which Trump is an innocent victim. In their view, he was the target of foreign intervention in 2016, not the beneficiary; there was nothing to the Russia investigation. (Don’t mention the convictions of his campaign manager, his national security adviser, his longtime political adviser, and others.) And the Ukraine scandal—based on a suspect whistleblower (disregard all the testimony from known officials)—is merely another front in the unrelenting war the Democrats have been waging against Trump because, as Jordan yelled on Tuesday, “the Democrats have never accepted the will of the American people.”

Toward the end of Vindman’s and Williams’ time before the panel, Rep. Sean Patrick Maloney (D-N.Y.) asked Vindman to read aloud the last paragraph of the prepared testimony he delivered at the start of the hearing: “Dad, [that] I’m sitting here today in the US Capitol talking to our elected officials is proof that you made the right decision forty years ago to leave the Soviet Union and come here to the United States of America in search of a better life for our family. Do not worry, I will be fine for telling the truth.” Maloney asked why he reported Trump’s phone call to lawyers at the National Security Council. “Because that was my duty,” Vindman replied.

With his testimony, Maloney told Vindman, “You were putting yourself up against the president of the United States.” (Trump and his henchmen have viciously attacked Vindman.) Maloney asked the colonel, “Why did you have confidence you can do that?” Vindman, a recipient of the Purple Heart, answered, “Because, Congressman, this is America. This is the country I have served and defended…And here right matters.” The audience responded with loud applause. The Republicans on the panel looked glum. Moments later, when Nunes had the chance to make a concluding statement, he snorted, “Act One of today’s circus is over.”

These hearings are aimed at examining the specific case for impeachment based on a single and narrow episode of presidential malfeasance. But there are competing visions at play in the proceedings. On day three, Vindman’s view that duty compels the exposure of wrongdoing clashed with Nunes and company’s perspective that spin, conspiracy mongering, and politics can trump all. This has been—and will continue to be—a defining fight of the Trump era.