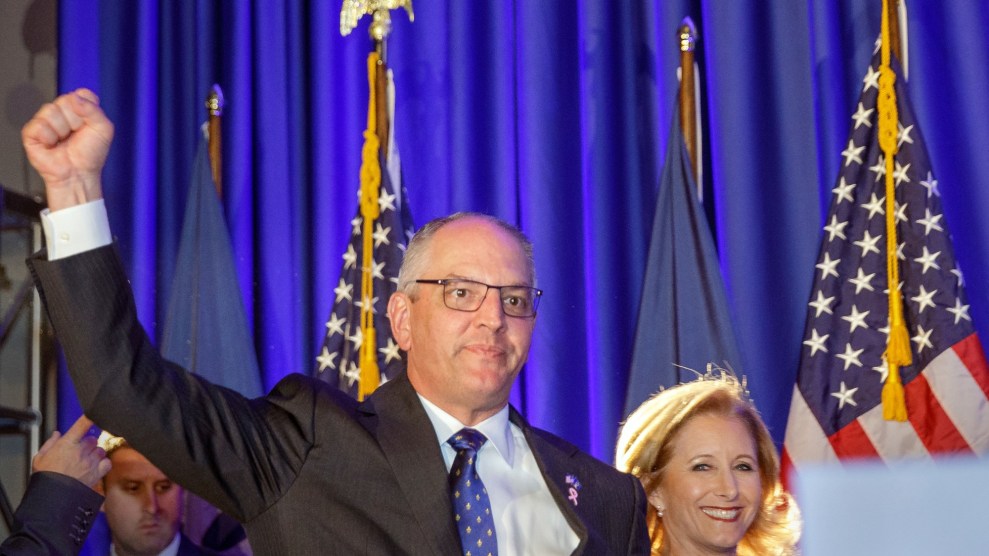 In the past four years, the governor of Louisiana has signed both a statewide expansion of Medicaid and one of the country’s most restrictive abortion bans. He’s a Democrat in one of the reddest corners of the Deep South. And when he goes up for reelection on Saturday, polls show, the same voters who backed Donald Trump by nearly 20 points in 2016 could very well send him to victory.

“If you try and filter this through a national or partisan filter, you’ll find that not a lot of things add up,” explains Stephen Handwerk, executive director of the Louisiana Democratic Party.

In the era of impeachment, Medicare for All, and an insurgent left wing, is there still room for a staunch pro-lifer in the Democratic Party? To answer that question, there’s no better test case in the country than the political fate of John Bel Edwards.

Edwards, who has served as governor since 2016, faces Republican challenger Eddie Rispone in Saturday’s election, which is technically a runoff between the two candidates. Louisiana has a “jungle primary” system, where the top two finishers irrespective of political party advance to a runoff if no candidate gets a majority of the vote. Edwards comfortably led the field of candidates in the October 12 primary but barely failed to reach 50 percent, sending him into the November 16 runoff. Edwards and Rispone are neck and neck in the polls, with Edwards maintaining a small lead within the margin of error.

Edwards’ win in the 2015 governor’s race was seen as something of a fluke. He succeeded in tying his opponent, then-Sen. David Vitter, to the deeply unpopular outgoing Republican governor, Bobby Jindal, and focused the election on Vitter’s past involvement with a prostitute. As governor, Edwards has overseen a massive expansion of Medicaid, criminal justice reform efforts aimed at reducing Louisiana’s high incarceration rate, and one of the most restrictive bans on abortion in the country. Now Edwards, the lone Democratic governor in the Deep South, is going up against Rispone, a conservative businessman with Trump’s backing.

“If you try and filter this through a national or partisan filter, you’ll find that not a lot of things add up.”

His stance on abortion would probably doom him in California or New York or Illinois, but Louisiana is not those places. Handwerk, who has worked in Louisiana politics for the past 30 years, believes that Edwards’ lack of conformity to the national Democratic platform won’t be an issue for Democrats in the state.“The vast majority of voters are considering this holistically,” he says. “I don’t think it’s surprising to anyone in the state the vast diversity of opinion that we have on abortion and all things revolving around that.”

That doesn’t mean Handwerk or other party activists agree with Edwards’ position on abortion. Edwards’ record as an anti-abortion Democrat goes back to his time in the state legislature. In 2010, Edwards voted in favor of a law that barred insurance offered through an Obamacare exchange from covering elective abortions and stated that “human life begins at conception.” As governor, Edwards ramped up his anti-abortion policies, signing into law a so-called “fetal heartbeat” bill, which banned abortion when a heartbeat can be detected, generally around six weeks. Many people aren’t even aware of their pregnancy at that time. The law did not create exemptions for rape and incest, making it one of the harshest abortions bans in the country.

Sally O. Donlon, an assistant dean at the University Louisiana at Lafayette and a member of the Lafayette branch of the Louisiana Democratic Party, recalls the betrayal many of Edwards’ female supporters felt when he signed the heartbeat bill into law. “After his signing of the recent so-called heartbeat bill giving preferential treatment to a clump of cells over fully actualized women, we were very angry, and a lot of us came out and said that we would never support him,” she says.

However, she says, many of those women changed their tune when faced with the choice between Edwards and Rispone, a staunch conservative who has said he wants to freeze enrollment in the state’s Medicaid program, a move that could leave hundreds of thousands of low-income Louisianans uninsured.

“In the end, all of the Democratic women I know are active in phone banking for [Edwards] and rallies and everything like that,” Donlon says, “because reproductive rights are not our only issue.”

Edwards’ opposition to abortion might not sink him, but it’s also not clear that it will actually help him on Saturday, even in the state with the highest share of people who support a total ban on abortion. “It’s an impediment to a strong relationship with Democratic activists,” says Robert Mann, a political historian at Louisiana State University. “What’s left of Democrats in Louisiana tend to be liberal Democrats. The moderate Democrats, a lot of them have been picked off or gravitated over to the other side, and so it does make Edwards’ position look a little more out of touch with rank-and-file Democrats.”

Edwards, a devout Roman Catholic, has never shied away from discussing how his faith has influenced his political beliefs. In a 2015 campaign video, he and his wife Donna discussed the moment their daughter was diagnosed with spina bifida, a birth defect that can cause fluid in the brain and various mobility issues. The doctors encouraged Donna to have an abortion about 20 weeks into her pregnancy, but the couple decided not to end the pregnancy, a decision Edwards says was influenced by his belief that “God has a purpose in everything.” Edwards later explained in an interview that he told this story to show voters that his position on abortion was “sincere” and not politically motivated.

If Edwards’ pro-life stance is hurting him among the national Democratic donor class, it doesn’t show in his fundraising numbers.

Although the two candidates have similar positions on abortion, access to health care is a major point of contention between them. On his first day in office, Edwards signed into law a massive expansion of the state’s Medicaid program. A survey conducted by Louisiana State University found that the uninsured rate among adults fell by half between 2015 and 2017, from 22.7 percent to 11.4 percent. Rispone has argued that Louisiana’s Medicaid program is rampant with wasteful spending. In the candidates’ most recent debate, Rispone declared that he would “freeze” enrollment into Medicaid in the state until he could eliminate what he considers useless spending—a move Edwards argues would eventually force 300,000 people from the state-based Medicaid program.

If Edwards’ pro-life stance is hurting him among the national Democratic donor class, it doesn’t show in his fundraising numbers. He has raised more than $14 million, up from $10 million in his last gubernatorial campaign. That includes more than $2 million from out-of-state contributors, compared to roughly $600,000 in 2015. Edwards has narrowly out-raised Rispone, even though $11 million of the $13 million Rispone has raised has come from his personal wealth.

While Edwards may not be struggling financially, Mann worries that his message may be falling flat with black voters, who comprise 57 percent of registered Democrats in Louisiana. Based on historical voting patterns, Mann estimates that, in order to win, Edwards will need roughly 95 percent of black voters who show up to support him, in addition to 30 percent of white voters. Given the overwhelming support of Louisiana African Americans for Democrats, the key for Edwards is really turnout. (In 2015, Edwards benefited from higher turnout in majority-black precincts and lower turnout in whiter ones than in previous elections.) In the October 12th primary, black voter turnout hovered around 38 percent, nearly 12 points below white turnout.

Edwards’ moderate and conservative positions on some issues are unlikely to excite many of the state’s black voters, and his rhetoric might not help either. Edwards praised Trump—who is extremely unpopular among African Americans—in the wake of massive flood damage in 2016, and he has prominently featured law enforcement officials in his campaign ads. “[Edwards is] a pro-life, pro-gun, pro-law enforcement, too-conservative Democrat who gets along well with Donald Trump,” says Mann.

Saturday will serve as a test of Edwards’ strategy: Can a Democrat appear tough on crime and still turn out enough black voters, and win over female supporters after signing one of the strictest abortion bans in country? In a party that is increasingly moving to the left, Edwards surely doesn’t fit the national mold. But for Southern Democrats, says Mann, it’s still par for the course. “There’s no such thing as a perfect candidate,” he says. “Every election is a choice between two imperfect people. It’s always a lesser of two evils.”