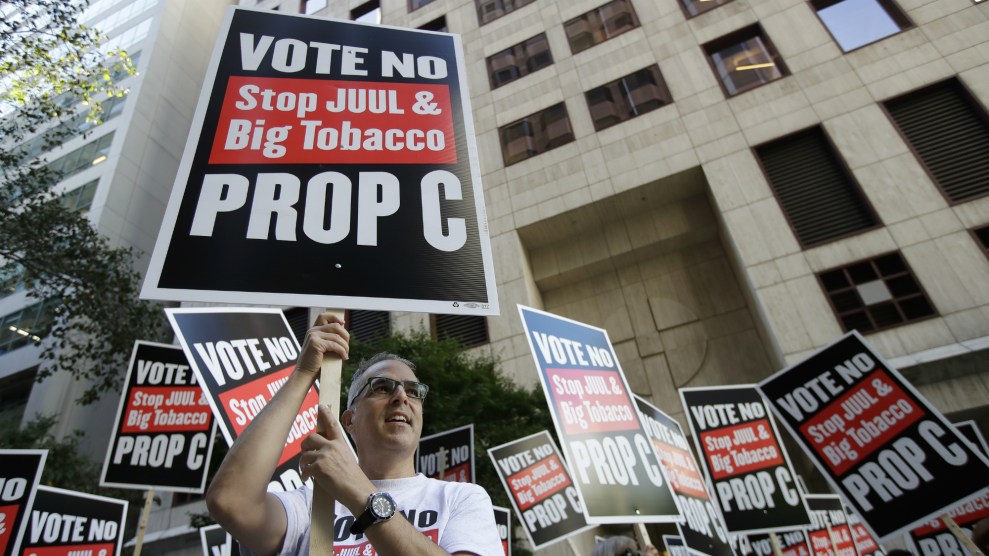 A proposition to overturn San Francisco’s upcoming ban on e-cigarettes was soundly defeated at the polls on Tuesday—80 percent of voters rejected it. The measure was initially backed by Juul, and though the company withdrew its support in the fall, the vote marked a major blow for the company in its own backyard.

The ballot proposition centered on a measure, passed by the city in June, that banned e-cigarettes, pending FDA approval of the product. Shortly afterward Juul, the nearly $40-million vaping company headquartered here, began pushing Proposition C, which would’ve overturned the ban but was advertised as a set of regulations to enforce the vaping age of 21. As I reported, this kind of thing is a common tactic, taken straight from big tobacco:

Juul began collecting signatures for what appeared to be an initiative that calls for stricter enforcement of Tobacco 21 laws on vapor products. Deep within that ballot initiative is a clause that “rolls back the City’s ban on the sale of flavored e-cigarettes,” wrote Stanton A. Glantz, director for the Center for Tobacco Research Control and Education, on his blog, “and guarantees that Juul will remain welcome in the City,” The new regulation would “preempt and overrule” existing regulation, eliminating the progress already made on other bans.

Efforts designed to look like proposed self-regulation from big tobacco often have hidden rollbacks, according to [Dr. Pamela] Ling. In 1994, the tobacco industry, facing a slew of local laws regulating indoor smoking, went to the California legislature with a proposition that presented as cleaning up the air but actually swung against local ordinances that worked to curb their millions in lost sales by bringing jurisdiction to the state level. After the 1998 massive Master Settlement Agreement—a mea culpa in which the tobacco industry agreed to pay billions annually and end youth-targeted marketing after nearly every state’s attorney general sued to pay for the medical costs of smoking—the tobacco industry was required to create anti-smoking programs for teens. Tobacco companies used their punishment not to discourage smoking but to “portray smoking as an adult choice,” according to a research paper authored by Ling.

Juul ended up putting $11 million into the campaign for Prop C, according to the San Francisco Examiner. But it dropped its support in late September under a new CEO—and a little more than a week after the FDA announced it was investigating Juul’s claims that its product is healthier than traditional cigarettes. (Michael Bloomberg spent heavily to defeat the measure.) The move was part of a larger reassessment within Juul, as journalists and activists have increasingly criticized the company. In mid-October, the company also announced it would stop selling any “non-tobacco, non-menthol-based flavors in the US.” (At the national level, in early September, the Trump administration announced an upcoming ban on flavored e-cigarettes. The policy has not been released yet, but Axios reported earlier this week the administration will likely still allow tobacco and menthol flavors.)

The e-cigarette company has lobbied hard to help craft its own regulation and shape the narrative of e-cigarettes as a cessation or switching product, painting traditional cigarettes as the real enemy. As I wrote:

Juul proclaims itself a “satisfying alternative to the world’s deadliest consumer product—cigarettes” to explain its push to raise the age limit, and it touts research that positions flavored tobacco as helpful for those who wish to switch from cigarettes to vaping, rather than addictive themselves. But “safer doesn’t mean safe,” says Kathleen Hoke, a law professor at the University of Maryland who studies tobacco regulation.