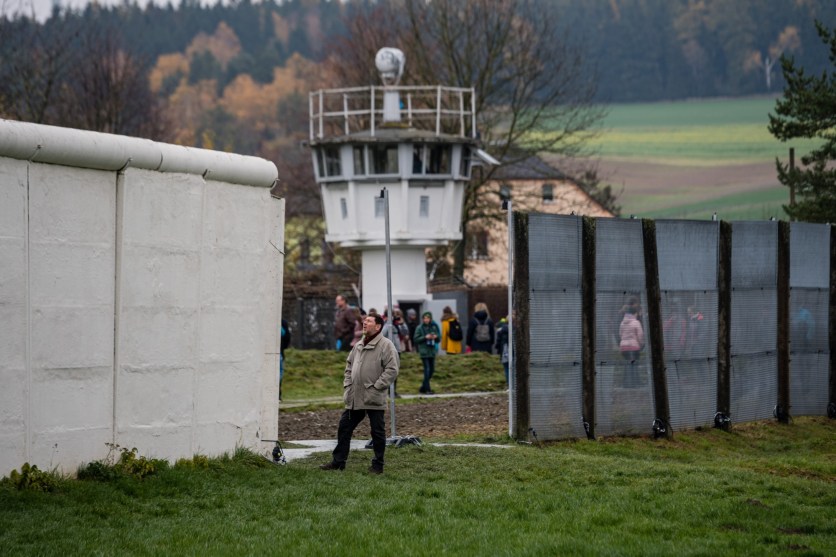 I saw an old tweet of yours resurface on Saturday to mark the occasion of the 30th anniversary of the fall of the Berlin Wall. It’s from 2015, when you were a Fox News commentator and not a flack in the Trump administration, though these days is there any difference?

This is a US Govt official praising the GODDAMN BERLIN WALL, the symbol of 70 years of oppression and division under the Soviet boot.

In any other administration, this person would be fired immediately and never work in this town again. What an embarrassment these clowns are. pic.twitter.com/eomvcO63J6

In so many ways you’re right. Walls do work. The Berlin Wall, for instance, worked for 28 years to sanction oppression, normalize human rights abuses, rob innocent citizens of any autonomy, and reward despots. It divided Germany between the prosperous and democratic west, and the Soviet satellite in the east, where hundreds of thousands of people participated in a security apparatus in which they informed on neighbors, co-workers, family members, even spouses. Did you know that at least 5,000 East Germans tried to escape? And this wall worked so well, 239 people died attempting to cross it, attempting to overcome its barbed wire and soldiers trained to kill.

But here’s the thing. For once, you may have just been a little bit off message with your tweet. It may have slipped your mind back then, in the thrill of being there, that not all walls are created equal. Sure, I get that you totally believe that our wall on the southern border that the president is so determined to build is a good wall. The Great Wall of China is an amazing wall. But somehow, as a loyal Republican with a PhD in international relations from Columbia and a former researcher for Richard Nixon in his emeritus years, you have forgotten that the Berlin Wall was one of those bad walls. One that in 1987, your sainted Ronald Reagan memorably told Russian leader Mikhail Gorbachev to “tear down.”

You may have missed some of the memorials scattered throughout the city for those who were killed during the Holocaust. Berlin is a city that takes history really, really seriously. Maybe the next time you’re there, you should head out to this residential area in the periphery of the heart of Berlin to visit the former Stasi prison, Hohenschönhausen, where men and women were sent after they’d been deemed unreliable members of society because they, say, wrote a letter to a friend in the west, or expressed an opinion that skirted uncomfortably close to criticizing the regime. They were tortured there. Some people lost their minds there. Some people stayed for years without having any idea of why. They were all living in that walled-off part of Berlin. Their crimes and their punishments would not have borne up to much scrutiny in a place where the rule of law prevailed. But in a walled-off country, no problem.

You are clearly too young to remember this program from the early ’60s called That Was the Week That Was. (To be honest, it’s not like I remember it very well either.) It was a satirical look at current events, and in January 1964, when the Berlin Wall had been functioning for three years and authorities permitted a brief period of visitation for Christmas, they ran this strange hand ballet by puppeteer Burr Tillstrom. The creator of one of the earliest kid’s programs on TV, Kukla, Fran and Ollie, about a little group of adorable puppets who had adventures, Tillstrom in this depicted for American audiences a moment when a couple was finally separated by the wall. A parent and child? A brother and sister? It doesn’t really matter. I don’t remember when I first saw it, but it just has stuck with me in all its weirdness and raw emotion.

Why is this so strangely affecting? The universality of hands, I think, helps—so free from gender, age, and any other obvious markers. It depicts with such austerity so many human emotions underlying a narrative of unjust separation and a too-brief reunion between the saved and the damned: shyness, rhapsodic moments, sweet generosity, the sheer agony at the unfairness of it all once visiting hours have ended.

The Berlin Wall didn’t just divide that city. It literalized the image of the Iron Curtain that had descended across Europe after World War II, dividing the continent between the totalitarian communist system and liberal democracy. My family is Hungarian, and I had a quite a few relatives living on the other side of that metaphorical wall. My grandparents lost their home and were deported to the countryside. My grandfather lost his pension. My aunt was first sentenced to death and then life imprisonment for being too friendly with the Americans. My father’s cousin was murdered by the secret police. Walls work, sure, but to say it is only to beg the one question that matters: work for whom?