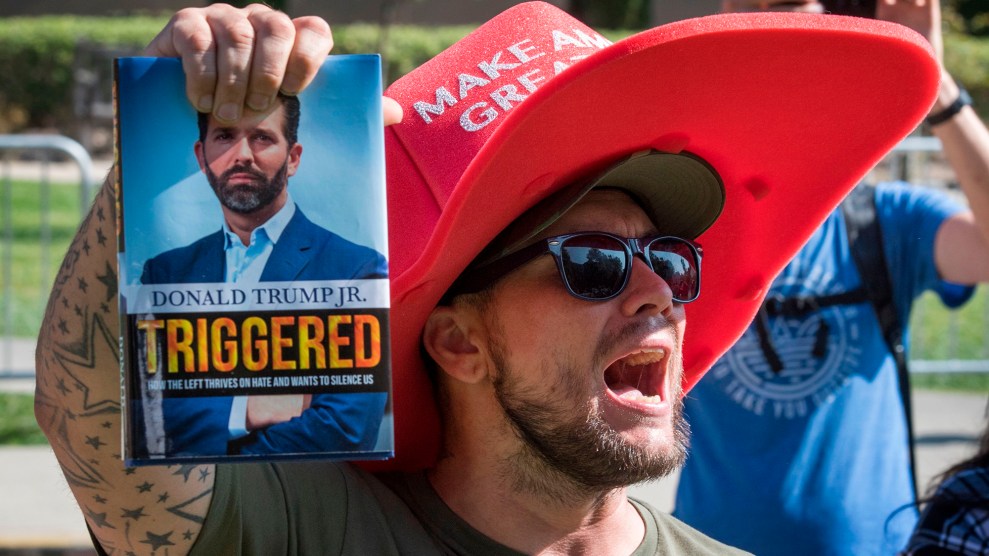 A supporter of President Trump yells at counter protesters outside a book promotion by Donald Trump Jr. at the UCLA on November 10, 2019. Photo by MARK RALSTON/AFP via Getty Images

In an incredible twist of irony, Donald Trump Jr. was heckled off stage last week during a talk about his new book “Triggered” after he couldn’t handle the onslaught of right-wing trolling at his event.

Trump’s son being harassed from the right seemed surprising, but the heckling represented a new height for a growing movement that’s been seeded by Nick Fuentes, a white nationalist upstart who’s been taking advantage of major tech platforms to gain prominence. The increasingly prominent racist had been feuding with Charlie Kirk, Don Jr.’s friend and the founder of Turning Point USA, an organization for young conservatives with chapters at colleges nationwide.

After a Turning Point USA event last month in which Kirk defended the US relationship with Israel, Fuentes decided to sic his followers on Kirk and his organization, advising them to show up at his and other conservative events and manipulate the question and answer portions into confrontations designed to spread alt-right ideas—in effect, make them real-life internet red-pilling sessions designed to win converts to the racist, far-right. Fuentes’ followers flooded the mics with questions about Israel, littering their queries with suggestions for the crowd and people watching the event’s livestream to Google far-right conspiracies, including anti-semitic ones.

Fuentes has harnessed tech platforms to help fuel his rise and to spread white nationalism, using at least one YouTube account and a verified Twitter handle, which he’s deployed to rally his followers to turn out for Turning Points events.

It’s unclear why Fuentes still has a presence on the platforms. On YouTube, where he hosts his show, he’s repeatedly denied the holocaust and said demeaning things about gay people including slurs like “faggot,” both of which should be considered violations of YouTube’s hate speech policy, which bans “promoting violence or hatred against individuals or groups” based on attributes including “Sex/Gender.”

While Twitter has banned some white supremacists and stripped others of their verified badge, nether has happened with Fuentes. Instead the platform has emerged as a pivotal tool in his push to spread white nationalism. In 2017, he had barely 2,000 Twitter followers. He now has over 70,000, gaining 20,000 since he started targeting Turning Point USA events at the end of October, according to SocialBlade, a social media analytics website.

It’s also possible that Fuentes’ actions violate both Twitter and YouTube’s policies against coordinated abuse and harassment. Both companies have vague rules governing such violations, but in the past, Twitter has taken against users who took part in a coordinated harassment campaign telling journalists to “learn to code” in the wake of a large wave of media industry layoffs. The companies declined to answer questions for this piece, including whether Fuentes encouraging his followers to engage in a harassment campaign in which they spread antisemitic hoaxes would break their polices.

There is some precedent among tech companies for banning him. Reddit removed a subreddit in support of Fuentes earlier this month, according to The Daily Dot, but hasn’t explained why it took down the group. The Daily Dot reported that it had been used to organize targeted harassment on Fuentes’s critics; Reddit did not respond to a Mother Jones request for comment.

Joshua Citarella, an artist who researches and has written about fringe internet political trends, pointed out at least one instance where a Fuentes follower told viewers of a TPUSA event to Google an obscure antisemitic conspiracy prompting the most Google traffic it’s ever generated, according to the site’s own search trends tool.

In the past, tech companies have been hesitant to act on problematic accounts on the right out of fear of sparking conservative outrage. While anti-immigration writer Michelle Malkin has supported Fuentes in his recent confrontations, many other conservatives have disavowed him, even saying that his ideas are “Nazi ideas.” Former Trump administration official Sebastian Gorka even questioned why Fuentes has maintained his Twitter verification.

Why is @NickJFuentes, despicable Holocaust Denier, verified by you @Jack? https://t.co/JDp5UCEDzC

Actual Nazis seem to think that Fuentes is one of them, or at least on their side. Neo-Nazi website The Daily Stormer has excitedly chronicled Fuentes’ campaign against Kirk and written guides educating budding, young neo-Nazi, Fuentes fanboys on how they can successfully troll Turning Points events and redpill new followers. One Stormer post urged Fuentes followers to shout suggestions for those watching in the crowd and on the livestream to Google specific terms about far-right, fringe conspiracies, either during the Q&A or, if they were removed from the event, as security escorted them out   .

Another reason tech platforms might be slow to react to Fuentes, despite his explicit bigotry and harassment campaigns, is that he’s taken steps to shield his racism. As opposed to figures like Richard Spencer, Fuentes avoids giving voice to outright white nationalism. If pressed, he’ll deny it while putting forward more palatable seeming positions that can be but aren’t always necessarily racist.

In his own presentation, Fuentes isn’t an antisemite, he’s just posing reasonable questionable questions about Israel. Fuentes doesn’t believe in outlandish conspiracies about the extermination of white people, he’s just worried about birthrates. Fuentes doesn’t hate people of color and want an ethnostate, he just believes that it’s fine to raise the question because of how valuable free speech is.

But no matter how careful he is, Fuentes ends up breaking character a lot, revealing who he and his followers actually are. In a livestream offering realtime commentary on a Turning Point USA event, he repeatedly called one of the speakers, who is gay, a “faggot.” In a debate against progressive streamers, Steve Bonnell, who streams under the name Destiny, and the Young Turks’ Hasan Piker, Fuentes says that he disagrees with interracial marriage.

Right Wing Watch’s Jared Holt has documented other recurring slips by Fuentes seemingly outing himself as a white nationalist, including one instance where he explained that he doesn’t publicly label himself as a white nationalist because it’s not politically expedient—not because, in his own words, he doesn’t “see the necessity for white people to have a homeland and for white people to have a country.”

Rep. Dan Crenshaw (R-Texas), who is closely aligned with Turning Point USA and has appeared at its events, broke Fuentes’ doublespeak after dealing with it first-hand after his followers mobbed a Q&A session at Arizona State University where the congressmember spoke.

“The basic nature of their questions was to ask a question that at first seems like a legitimate policy difference, perfectly debatable,” Crenshaw wrote in an email exchange with Vox’s Jane Coaston. “But what then becomes clear—and there are hints along the way—the motivations are deeper and darker than their original question indicated.”