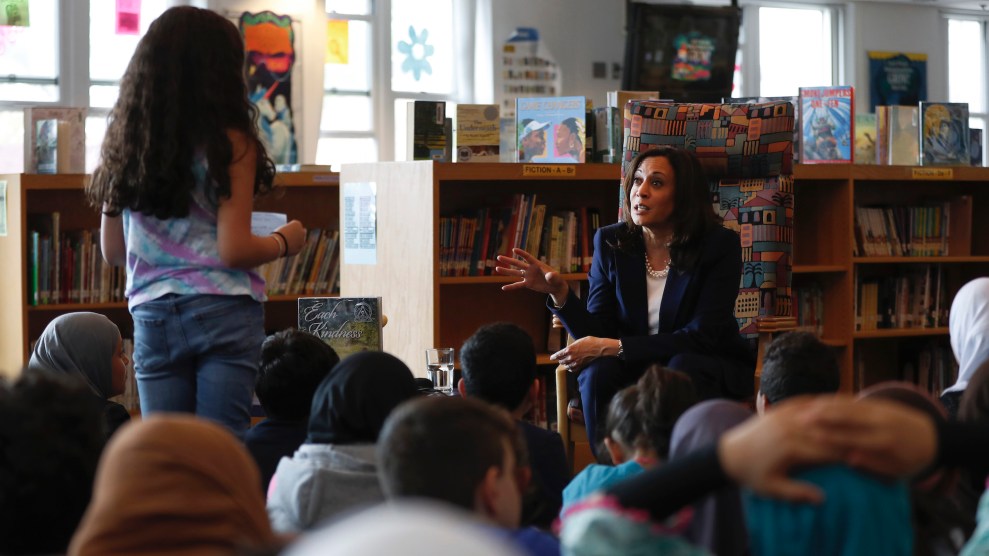 The mismatch between the school day and work day presents a real burden to working Americans with families. And Sen. Kamala Harris (D-Calif.) has a new bill that seeks to correct it.

The majority of schools days end around 3 p.m., two hours before the end of 70 percent of parents’ workdays. And most schools don’t have a way to make up the difference. Fewer than half of all elementary schools—and fewer than a third of low-income schools—offer after-school care. Beyond that misalignment, schools shut down, on average, for 29 days during the school year, the majority of which are reserved for professional development, parent-teacher conferences, and myriad vacations and minor holidays the federal government doesn’t recognize. That’s a full two weeks’ worth of days more than what the average American has in holidays, vacation, and paid leave combined. And then, of course, there’s summer vacation, a two- to three-month break that leaves working parents scrambling for day-long care.

I wrote about this phenomenon for the Atlantic last year, pointing to a series of disquieting statistics that Harris also raises in her bill, which the California senator is releasing on Wednesday. The school day and calendar is a bad deal for children: In the absence of a better alternative, 3 percent of elementary-school students and 19 percent of middle-school students look after themselves from 3 to 6 p.m. on school nights. But it’s an equally bad deal for working parents—and the economy as a whole. A family paying out of pocket to cover child care for those two hours between the end of the school and workday costs an average of $6,600 dollars per year, or nearly 10 percent of an average family’s income. Almost 40 percent of all workers lack access to any paid vacation time, which means parents will often have to scale back their workday to accommodate child care duties.

That burden typically falls to women, a million of whom work less than full-time in order to keep up with caregiving responsibilities for elementary school-aged children. This hardship is particularly pronounced for low-income mothers and mothers of color, who are the most likely to have unpredictable or inflexible work schedules. Experts estimate the United States loses $55 billion in productivity each year thanks to the public school calendar. “Seventy-five percent of mothers of school-age children are working, and we need to come to terms with this reality,” says Catherine Brown, a researcher at the liberal Center for American Progress whose findings informed much of Harris’ bill. “How could we reimagine school so it’s better for kids and better for families?”

Harris frames her proposal through that lens, with a promise that “aligning school and work schedules is an economic growth and child development strategy.” Her plan: A pilot program that gives money to 500 schools that serve a high proportion of low-income families to develop a school schedule that better matches the work schedule. Each recipient school would receive up to $5 million dollars over five years to keep their doors open from 8 a.m. to 6 p.m., with no closures except for weekends, federal holidays, and emergencies. Professional development, parent-teacher conferences, and the like would have to happen, at minimum, alongside a full day of enrichment activities. At the end of the five years, the Education Department would publish a report documenting the best practices, as well as changes in parental employment, student performance, and teacher retention rates to be used to inform a future broader program.

“My mother raised my sister and me while working demanding, long hours,” Harris says. “So, I know firsthand that, for many working parents, juggling between school schedules and work schedule is a common cause of stress and financial hardship. But, this does not have to be the case.”

Schools are encouraged to use the funding to collaborate with community partners to develop “high-quality, culturally relevant, linguistically accessible, developmentally appropriate academic, athletic, or enrichment opportunities for students.” The directive is purposefully vague: Schools are to spend the first year surveying parents, teachers, and community members to determine what sort of extended school day would work best for their particular school population. “What’s exciting about this is that it’s an innovation bill,” Brown explains of Harris’ design. “We don’t have the solutions yet, but they’re going to come from local communities that know what works best for their parents and students.”

The bill would also require the school to find a private or non-federal public funding source, such as state grants or philanthropy organizations, to match 10 percent of the federal grant money, a stipulation intended to help the programs remain sustainable after the initial grant money has run out. The matches can be money or an in-kind contribution in the form of volunteer staff time, meeting spaces, or equipment.

Those in-kind contributions of staff time might be critical to her plans’ success. Harris’ plan takes pains to ensure school staff wouldn’t be overburdened by her vision, a key concession in an environment in which teachers have taken to the picket lines to protest long hours and low pay. Teachers and administrators would not increase the amount of time they work unless they volunteer additional hours and are compensated fairly for them. “This could be a real win for teachers,” Brown explains, noting that an extended schedule would give schools the chance to get creative about who has responsibility for students throughout the day. “It shifts the mindset from one teacher being responsible for a group of kids all day to the school and community collectively watching students.”

Randi Weingarten, president of the American Federation of Teachers, one of the country’s largest teachers unions, supports the measure. “This bill would enable school districts and communities to find solutions that work for them,” she said in a statement, while ensuring “teachers and paraprofessionals aren’t filling in the gaps without respect and fair compensation.”

Harris’ plan offers specificity around a concern that her fellow 2020 Democratic contenders have gestured at, but without Harris’ level of specificity. A number of other candidates have advocated for a “community school” model that would provide extended learning time and after-school programs in addition to other social services, such as health and dental care. Bernie Sanders’ K-12 education plan calls for $5 billion in annual funding to support these types of schools, Elizabeth Warren’s plan promises to transition 25,000 schools onto that model by 2030, and former Housing and Urban Development secretary and 2020 hopeful Julián Castro has an eight-year plan to extend community schools into high-need communities.