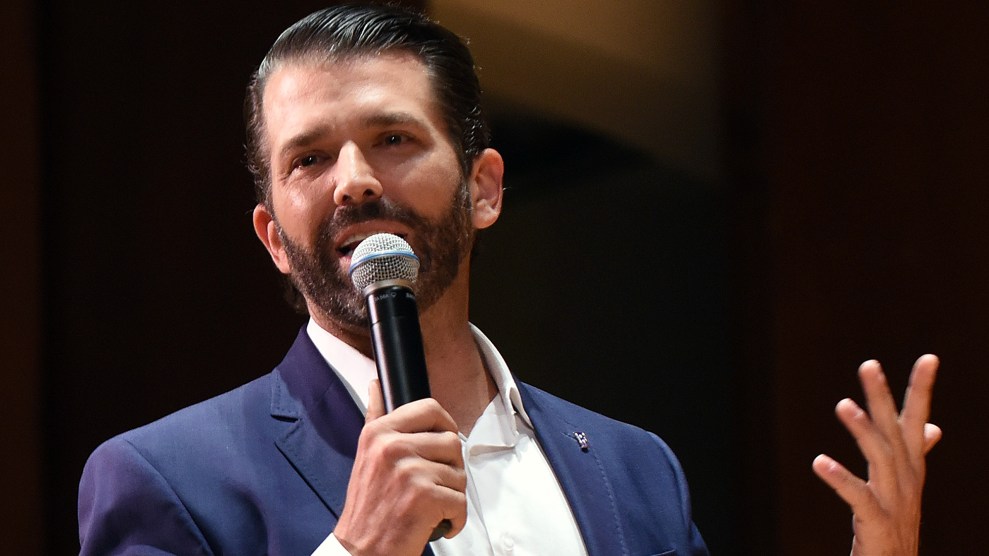 Over the past week, President Donald Trump and his allies have turned their attention to the whistleblower whose complaint sparked a formal impeachment investigation. While the president’s son on Wednesday tweeted a name he alleged was the person, his camp has been calling on the press to out the anonymous whistleblower, who they claim is a partisan Democrat. Experts on laws protecting whistleblowers say this harassment crosses the bounds of legality, but that it is unlikely the Justice Department will step in.

An 1982 law designed to protect witnesses in organized crime trials could apply to Trump allies.

On Sunday, Trump told reporters that he wanted them to unmask the whistleblower. “The whistleblower gave a very inaccurate report about my phone call,” he said. “You know who it is. You just don’t want to report it. CNN knows who it is, but you don’t want to report it. And you know, you would be doing the public a service if you did.” His Republican allies in Congress have picked up this message. Standing next to Trump at a rally on Monday, Sen. Rand Paul (R-KY) also called for the media to release the person’s name. On Capitol Hill, Republicans have begun pushing the name of a person that conservative publications have reported—without confirmation—is the whistleblower by saying the name in closed-door hearings and tweeting articles containing it. One Congress member, Rep. Louie Gohmert (R-Texas), said the name out loud in a hearing unrelated to the impeachment inquiry. The campaign reached a new peak on Wednesday when Donald Trump Jr. tweeted a name he fingered as the whistleblower, insinuated the person is anti-Trump, and provided a link to an article purporting to detail the whistleblower’s biography.

While unmasking the whistleblower, which could put the person in harm’s way, may run afoul of federal law, available whistleblower protections are weak. Congress passed a law in 1912 law protecting federal employees’ right to share information with its members and committees, it is so short and sweet that it fails to provide any means of enforcing the right.

The 1989 Whistleblower Protection Act covers most federal employees, but specifically excludes those who work “in a classified environment.” To fill the gap, Congress passed a whistleblower protection law for the intelligence community in 1998. As subsequently amended, the law could shield this whistleblower from official retaliation such as being fired or demoted if the person is in fact, as the New York Times has reported, a CIA officer. But whistleblower advocates have long warned that while the act suggests whistleblowers identities should be kept confidential, there’s no enforcement mechanism. In the current situation, they worry the law is plainly inadequate.

According to Tom Devine, legal director at the pro-whistleblower Government Accountability Project, the statutes that come closest to preventing the president or his allies from naming and harassing the whistleblower were originally designed to protect witnesses in organized crime trials. The Victim and Witness Protection Act of 1982 makes it a felony punishable by up to five years in prison to obstruct a proceeding of a federal agency or Congress, including any communication meant to impede the investigation. Outing the whistleblower or threatening them with exposure could not only hinder their participation, says Devine, but create a “chilling effect” for future witnesses that may be called or are considering coming forward. That same law, strengthened in 2002, makes it a felony punishable by up to 10 years in prison to retaliate against someone for participating in a federal investigation. The comments from Trump and his allies toward the whistleblower are “obviously intended to harass the witness and scare others into silence,” says Devine, and a prosecutor could argue the law applied to any number of Trump allies seeking to interfere with an investigation on his behalf.

Enforcement of any of those laws would require the participation of the Justice Department, which dismissed the whistleblower’s claims of illegality and initially ruled that his complaint need not be shared with Congress. With Attorney General Bill Barr, the president’s close ally, running the department, Devine says it’s unlikely any charges will be brought. “It’s exposing a real catch-22 in our system of legal accountability,” he adds, “when the Attorney General is in bed with a lawless president.”

“It’s exposing a real catch-22…when the Attorney General is in bed with a lawless president.”

Republicans hope that they can out the whistleblower and paint him as a Democrat trying to undo the 2016 election and argue that by extension the entire inquiry is a partisan coup. “There have have been stories written about a certain individual, a male,” Trump said on Sunday. “If he’s the whistleblower, he has no credibility because he’s a Brennan guy, he’s a Susan Rice guy, he’s an Obama guy. And he hates Trump,” he said, listing a series of Obama national security appointees under whom thousands of people worked.

If this sounds familiar, it is. Trump and Republicans spent a lot of time trying to discredit the investigation into Russian interference in the 2016 election and his campaign’s links to the effort by claiming the investigation was based on a biased report from British ex-spy Christopher Steele who was commissioned by Hillary Clinton’s campaign. Never mind that the so-called Steele Dossier was not actually the initial catalyst for the FBI’s decision to investigate and that it was originally commissioned by anti-Trump Republicans. Even as evidence of Russia’s interference grew, and detailed indictments piled up, Trump and his allies continued to point to the dossier’s roots rather than grapple with emerging facts to defend the president.

In the impeachment context, the whistleblower’s claims are likewise now a small piece of a much larger puzzle. The narrative outlined in the whistleblower’s report has been confirmed not only by the White House’s own accounts but by contemporaneous records and multiple other government officials who have shared more information on the key events than the whistleblower ever had access to. For this reason, the whistleblower’s lawyers have argued that their client’s identity is irrelevant, writing that calls to force him to publicly testify are “a spiteful campaign” and a “diversionary tactic” that would put their client and “their family at risk of harm.”