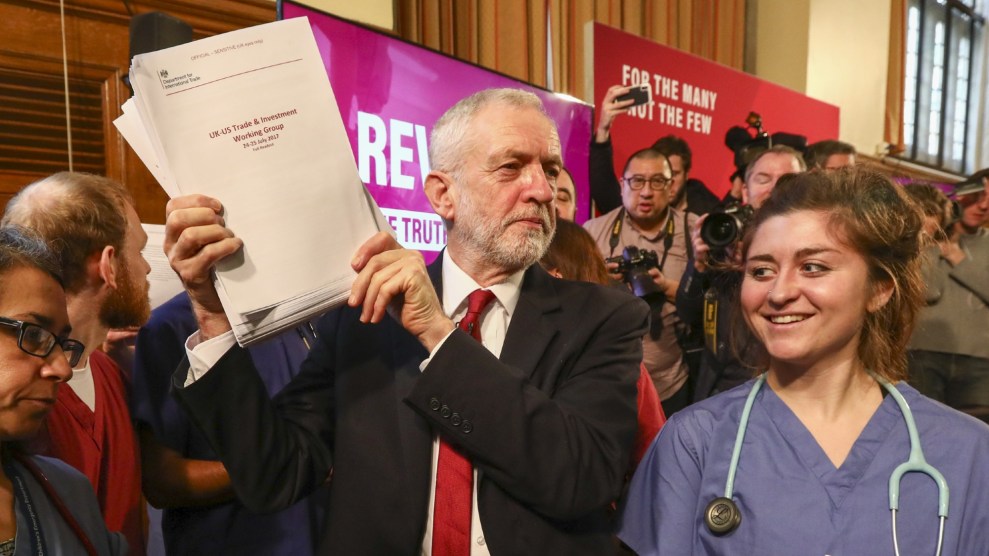 With less to a week to go before the United Kingdom heads to the polls on Thursday for a nearly unprecedented December parliamentary election, the race has been rocked by suspicions that Russia was involved in spreading secret leaked records that have become central to the debate. The chain of events raises the possibility that, just as in the United States in 2016, online forces linked to the Kremlin are working to shape the information landscape as a national election of enormous consequence unfolds.

Ever since the UK voted narrowly to approve a June 2016 referendum backing the country’s exit from the European Union, the question of how or whether to enact that result has wracked its political institutions and alignments. But some truths persist: the National Health Service, the government-run and -owned heath care program remains enormously popular, as both the major candidates to be prime minister, incumbent Conservative Boris Johnson and Labour leader Jeremy Corbyn, debate plans to shower the country with more hospitals, nurses, and appointment times. Another immovable fact is President Donald Trump’s toxicity in the country, as in most western democracies.

On Saturday, Corbyn was asked if Labour might be benefitting from a Russian trolling operation.

If the UK is ever to exit the EU, as Johnson wants, one of the first and most important orders of business, Conservatives say, will be to negotiate new trade agreements around the world that will usher in waves of investment and trade—infusions that, in most economists’ eyes, will be desperately needed to blunt the harm of decreased access to mainland Europe’s massive markets. Perhaps the biggest plum would be a trade pact with the United States, on as advantageous terms as possible.

Even though Brexit is far from a finished matter, the US and UK have been meeting to discuss their future relationship since at least since July 2017, and since Johnson’s party put him in 10 Downing Street this summer, his ultimate counterpart in those negotiations has been Trump.

One of Corbyn’s main attacks has been to suggest that the National Health Service would be damaged by a continued Johnson government, and jeopardized by his trade negotiations with the much-reviled Trump administration. Labour has had trouble describing the exact nature of the risk, but as the UK’s election campaign kicked off in late October, President Trump’s impeachment has provided a handy running illustration of his willingness to be underhanded when negotiating with foreign heads of state.

Though Johnson has repeatedly promised that the NHS would be “off the table,” a new trade agreement conceivably could provide greater access for US companies to the UK’s protected medical markets. In late November, Corbyn brandished printouts from 451 pages of leaked documents related to the trade negotiations with the US, suggesting they represented a smoking gun demonstrating the NHS had indeed been the topic of negotiations. Most concretely, he pointed to discussions detailed in the papers governing drug patents that he argued would result in more expensive medication.

While Corbyn and Labour seemed to portray the documents as a recently uncovered smoking gun, the Conservatives responded by saying they had already been online for some time. That seems to be the case. Who put them there is another question.

According to a statement issued late on Friday by Reddit, where an anonymous user posted the documents in late October, promotion activity around the documents links them to a organized group originating in Russia that the company says it has caught operating on the platform. While the simplest explanation is that the Labour party downloaded the records from Reddit like many others or was given them by someone who had, Corbyn has declined to detail exactly where the party got the documents. He has argued no one denies their authenticity.

On Saturday, Corbyn was asked if he thought his party might be benefitting from a Russian trolling operation. While he said “there should be no interference in British politics by anybody else,” he dismissed the question as “nonsense.”

While Democrats on the United States Senate Intelligence committee compiled evidence suggesting Russia may have interfered in the 2016 Brexit referendum, the UK’s own inquiry examining the matter remains unpublished. Dominic Grieve, a former Conservative member of parliament who oversaw the drafting of the report, has protested the Johnson’s government’s decision not to publish it before this month’s election as “jaw-dropping,” saying it contained information “certainly pertinent” to the contest.

Opinion polls show Johnson and the Conservatives with a persistent lead over Corbyn’s Labour, indicating Johnson is well-positioned to secure the outright parliamentary majority he would need to push through the country’s official exit from the European Union and begin complicated trade negotiations with both Europe and new partners that are widely expected to stretch the better part of a decade. But the United Kingdom’s voters, starkly divided on regional lines and faced with a kaleidoscope of smaller parties beyond Labour and the Conservatives, could return a hung parliament where Labour is given an opportunity to work with others to, as they have promised, mount a second referendum that would, after decades of debate, give the country another chance to call off Brexit and remain a member of the European Union.