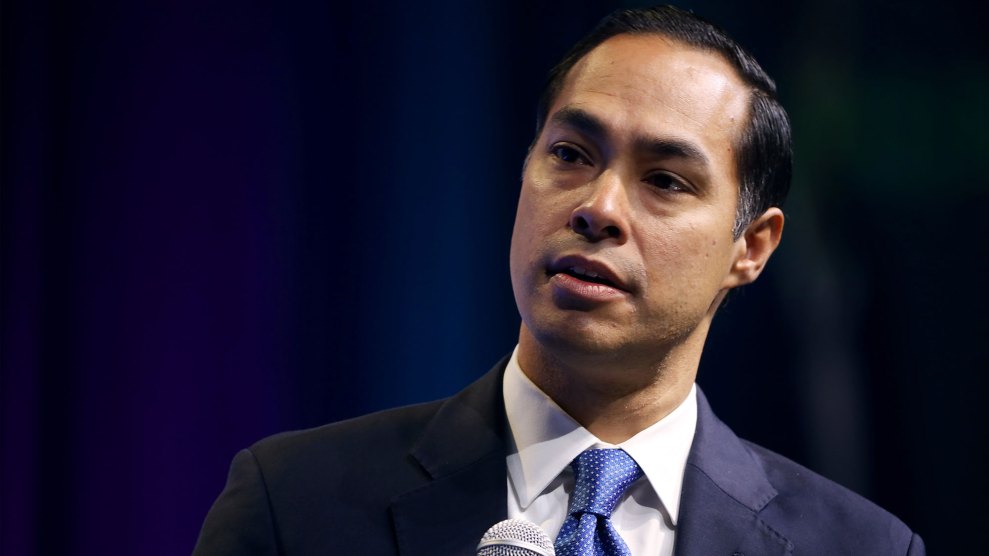 At last month’s Democratic presidential debate, moderator Rachel Maddow brought up a United Nations report that called climate change a crisis and asked the candidates about their plans to address it. One by one, they answered. Tulsi Gabbard promised to end subsidies for the fossil fuel industry. Tom Steyer said he would declare a state of emergency on day one of his presidency. Then Julián Castro weighed in: “Quick reminder that poor, working class, Black, Brown, and Indigenous communities are the first and most greatly impacted by climate change.”

The thing is, Castro wasn’t on the stage that night in Atlanta. He didn’t qualify for the debate. In fact, he was roughly a thousand miles away at his campaign headquarters in San Antonio, answering debate questions on Twitter, the hashtag #JuliánDebates appended to every tweet.

The absence of the only Latino candidate was palpable. Over the course of the two-hour debate, there were no questions about the ongoing evaporation of the asylum system at the US-Mexico border, the continued violence and hate crimes against immigrants, or even a basic acknowledgment of Latinx communities. The closest the debate got, in fact, was when the since-departed Kamala Harris included Latinas while listing different groups of POC women and what they were paid compared to white men. And were it not for last-minute mentions by Bernie Sanders and Andrew Yang, immigrants would’ve been virtually shut out of the debate.

“It’s disappointing because so many lives are being harmed by this president’s cruelty toward immigrants, and we need to make clear to the American public as Democrats how we’re going to fix our broken immigration system,” Castro told me this week. “The voters needs to know exactly where everybody stands on such an important issue that Trump is guaranteed to make a prime part of his own campaign.”

On Thursday, the Democratic candidates will assemble to debate once again, this time at Loyola Marymount University in Los Angeles. As the Democratic field continues to shrink, several prominent Latinx observers I spoke with recently worry that the failures of the last debate will carry over into 2020—and beyond.

A record 32 million people who identify as Hispanic will be eligible to vote in the next elections, according the Pew Research Center. That’s about 13 percent of the electorate, making it the largest non-white voting group in the United States, just slightly surpassing the number of eligible Black voters. That’s 32 million people who care about the economy just as much as any other group in this country, who care about income inequality, access to health care and good public schools, climate change, and gun control. And of course we care about immigration, too, but there are about 60 million of us living in the United States, and it’s clear by now that there’s no one hegemonic Latinx community: We have different religious beliefs, socioeconomic status, political party affiliations, and ties to different countries across Latin America. Still, when the umbrella terms “Hispanic” or “Latino/Latina/Latinx” are missing from the conversation on the debate stage, we notice.

“Are Democrats really reflective of the needs of our communities? Are they connecting with this new, younger, less foreign-born Latino electorate?”

And we start to worry that we’re being ignored—or worse still, pandered to yet again. Last week I spoke with Julio Ricardo Varela, the founder of Latino Rebels and the digital media director at Futuro Media, which produces Latino USA and the In the Thick podcast. Varela has long written about Latinx voters, and he told me he’s frustrated that Democrats have stuck to the same go-to talking points from previous election cycles, assuming they have Latinx votes wrapped up. “Trump doesn’t like Latinos, we got that, we’ve established that,” he said. “But are Democrats really reflective of the needs of our communities? Are they connecting with this new, younger, less foreign-born Latino electorate?”

University of California-Berkeley sociologist G. Cristina Mora agreed. She literally wrote the book on the rise of the Hispanic/Latino pan-ethnic category in the United States, and thinks that for 2020 perhaps the most important question will be, “Will we go to the polls or not?”

That question is what drives the folks at Voto Latino, a nonpartisan voter outreach organization. “Our work shows that when you do reach out to Latinx voters and include them, they show up,” said Voto Latino’s Mariah Castañeda. “Voting power in this country is increasingly Latinx and young…yet candidates continue to ignore Latinxs.”

A survey of Latinx voters in 2018 showed that more than half said they weren’t contacted by a political party or individual candidates ahead of the midterm elections, Castañeda said.

“Our people are angry, energized, and ready to go to the polls,” she said. “If Democrats want to get serious about winning, they need to pay attention to us.”

“If Democrats want to get serious about winning, they need to pay attention to us.”

On Wednesday, Castro went to Los Angeles to meet with people experiencing homelessness and held a town hall with day laborers and other immigrant grassroots organizations. As the pool of candidates shrinks, the 45-year-old former San Antonio mayor and Obama-era secretary of Housing and Urban Development keeps reminding voters that there are major issues that aren’t being covered by the front-running campaigns, issues that he has championed as the grandson of a Mexican immigrant and the son of a Chicana activist.

“I’ve brought a unique perspective to this campaign, and I don’t want anybody to vote for me simply for the color of my skin,” Castro told me. “But at the same time I do believe that representation matters, and it matters to little boys and girls out there to see that somebody that looks like them can run for president and that they can do that too.”

Castro has criticized the nomination process, pointing out that Iowa and New Hampshire are not “reflective of the diversity of the country, or our party,” and they should not be the first test for presidential hopefuls. He believes the thresholds to qualify for the debates should be reevaluated so voters get to hear from a range of candidates before they vote.

Castro, like many of us paying close attention to immigration issues, also would like to see moderators asking tough and detailed questions about the topic tomorrow. (Earlier this week, several immigrants rights groups sent a letter to Democratic National Committee chair Tom Perez, asking him to commit to hosting a “debate focused squarely on immigration”—and that every future debate include immigration as a topic for discussion.) “My hope is that they’ll address the issue of immigration in a state like California that is very much impacted by immigration policy,” Castro said. “I was happy that they finally asked a question about housing, and I hope they’ll follow that up because California, and Los Angeles especially, is experiencing a rental affordability crisis and a homelessness crisis that absolutely needs to be addressed.”

As we wrapped up our brief phone call, I asked Castro about something Kamala Harris said in the last debate that had stood out to me: “For too long, I think, candidates have taken for granted the constituencies that have been the backbone of the Democratic Party and have overlooked those constituencies,” she said. “And they show up when it’s close to election time, and show up in a black church and want to get the vote, but just haven’t been there before.”

Castro said Democrats had better not assume Latinx communities are going to vote for them. “I’m certainly not doing that, and throughout this campaign Democrats cannot take those votes for granted—or we risk losing enough votes to Donald Trump in the Latino community and handing him over an electoral college victory.”

Thursday’s debate will take place in a state that is majority non-White and in a county where 49 percent of residents self-identify as Hispanic/Latino. Meanwhile, Castro will be back in San Antonio on his phone, once again live-tweeting his answers—and offering the slightest bit of representation in an increasingly white field.

Correction: An earlier version of this story suggested Voto Latino conducted the poll of Latinx voters.