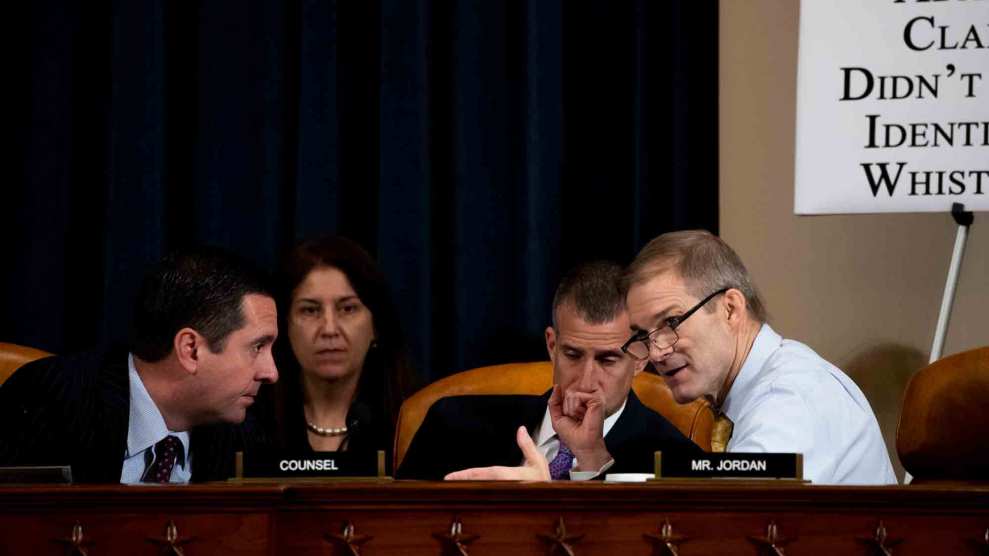 This just in: House Republicans are not being honest.

In a slapdash fashion, staffers for Rep. Devin Nunes (R-Calif.), the top Republican on the House Intelligence Committee, who has been implicated himself in the Trump-Ukraine scandal, and two other Republican ranking members—Reps. Jim Jordan of Ohio and Michael McCaul of Texas—have cobbled together a report on the impeachment inquiry that unshockingly proclaims Donald Trump innocent of…everything. This document was released on Monday ahead of the committee’s 300-page, highly detailed summary of its investigation and hearings that was unveiled on Tuesday and forwarded to the judiciary committee for that panel’s impeachment deliberations.

The Republican staff report is as predictable as a typical Trump tweet—and as mendacious. It assails and belittles the Democrats’ effort to investigate whether Trump muscled Ukrainian President Volodymyr Zelensky to initiate investigations that would dig up dirt on Joe Biden and produce information to back up a nutty conspiracy theory that holds that Ukraine, not Russia, hacked the 2016 election. And the GOP report proclaims the Democratic-led probe is “not the organic outgrowth of serious misconduct; it is an orchestrated campaign to upend our political system.” Even after Ambassador Gordon Sondland, who Trump used as a lieutenant in this caper, testified that there was a quid pro quo—White House action backing Zelensky in return for the Ukrainian government pursuing these investigations—the Republicans claim in this report there was “no quid pro quo, bribery, extortion, or abuse of power.” The report also asserts there was “nothing wrong” with Trump asking Zelensky to investigate Biden’s activities regarding Ukraine and his son Hunter’s involvement with a Ukrainian energy company called Burisma. It’s the product of Deep Spin.

The report echoes many of the rants of distraction and deflection issued by Nunes and Jordan during the intelligence committee’s hearings. And it is chock-full of attempts at gaslighting that are easily challenged or debunked. One example: “The evidence does not support the accusation that President Trump obstructed the Democrats’ impeachment inquiry,” the report states. Huh? The Trump White House has blocked key witnesses from testifying, and the State Department has refused to hand over significant documents. But one spot where the report truly goes off the rails—in a manner illustrating its fundamental crookedness—is its account of that fateful July 25 phone call between Trump and Zelensky.

It was this conversation that kicked off the Trump-Ukraine scandal, when it caused a whistleblower—now known publicly as a CIA analyst—to submit a complaint to the intelligence community’s inspector general asserting that Trump had abused the power of his office to pressure Zelensky to churn up derogatory information on a Trump rival. In September, the White House released a quasi-transcript of the call, noting it was not a verbatim rendering of the conversation, that clearly depicted Trump’s underhanded effort to leverage US assistance to Ukraine for his personal political benefit. When Zelensky expressed his interest in obtaining from the United States anti-tank Javelin missiles—a possible deterrent to Russia, which has seized portions of Ukraine—Trump immediately replied, “I would like you to do us a favor though.” Bingo—that’s linkage, that’s conditionality. Which the GOP report claims never transpired.

In recounting this phone call, the Republican report maintains that the Democrats have distorted the transcript:

Actually, no. This is an outright lie. There are several sentences between Trump’s request for a “favor” and his reference to getting to “the bottom” of Ukrainian involvement in the 2016 election (which was minimal). The Republican reconstruction leaves out an important step: Trump asked Zelensky “to find out what happened with this whole situation with Ukraine, they say Crowdstrike…I guess you have one of your wealthy people…The server, they say Ukraine has it.” This word-salad was a reference to crazy conspiracy hogwash that claims Russia did not hack the Democratic National Committee in 2016 and that Ukraine was somehow involved in the hacking or in spiriting away the DNC servers to cover up what really happened (which might be that the Democrats hacked themselves to set up Russia and Trump). This is an absurd notion. The US intelligence community and special counsel Robert Mueller’s investigation each concluded Russia hacked the DNC as part of its sweeping and systematic plot to disrupt the US election and help Trump win. Even the House Intelligence Committee (when it was led by Republicans) and the GOP-controlled Senate Intelligence Committee also declared Russia was the culprit. But Trump has embraced this idea, despite his top aides telling him it was bunk. Why? Because it absolves Moscow of culpability and removes the very real Russia stain on his electoral triumph. This is an alternative, bizarre reality Trump wanted to make real.

It’s also what the House Republicans airbrushed out of the picture: Trump muscling Zelensky in pursuit of information to prove a ludicrous conspiracy theory about the DNC servers. After all, it does show their man to be nuts. The report makes no mention of Trump’s fixation on this false server narrative; instead, it depicts him as merely asking Zelensky to investigate Ukrainian meddling in the 2016 election. And the meddling that the Republicans reference essentially centers on anti-Trump statements Ukrainian officials publicly made in 2016—remarks that were hardly surprising given that Trump, while campaigning, had indicated he believed it might be fine to let Russia hold on to Crimea, that portion of Ukraine it had illegally occupied and annexed. Republicans also point out that some Ukrainian officials were willing to help Democrats and American reporters researching the Ukrainian activities of Paul Manafort, Trump’s former top campaign aide—without noting that Manafort had pocketed millions of dollars as a consultant for a corrupt and pro-Russian Ukrainian president who had fled to Moscow in 2014 and was a legitimate subject of concern. (Manafort is currently serving a lengthy prison sentence in part because he laundered money and evaded taxes related to his Ukrainian work.) But just as the Republicans did during the hearings, their report casts these Ukrainian actions as major-league intervention—though they pale in comparison to the extensive covert Russian attack ordered directly by Vladimir Putin. Certainly, the GOP’s obsession with Ukrainian meddling serves Trump’s interest by drawing attention from or diminishing the importance of the Russian assault on the 2016 election.

There is another big whopper in the Republican report about the Trump-Zelensky call. It correctly notes that after Trump referred to the “whole situation” in Ukraine, he told Zelensky there was “the other thing” and raised the issue of Hunter Biden and the unfounded allegation that his father had stopped a prosecution of Burisma by forcing the dismissal of the government’s top prosecutor. Trump, according to the quasi-transcript, said, “So if you can look into it… It sounds horrible to me.” (Ellipses in the original document.) The report states, “President Zelensky did not reply to President Trump’s reference to the Bidens, and the two did not discuss the topic substantively.”

That is wrong and misleading. Zelensky in fact zeroed in on what Trump was requesting. He responded:

I wanted to tell you about the prosecutor. First of all, I understand and I’m knowledgeable about the situation. Since we have won the absolute majority in our Parliament, the next prosecutor general will be 100% my person, my candidate, who will be approved, by the parliament and will start as a new prosecutor in September. He or she will look into the situation, specifically to the company that you mentioned in this issue. The issue of the investigation of the case is actually the issue of making sure to restore the honesty so we will take care of that and will work on the investigation of the case.

Zelensky did the opposite of what the GOP report describes. He told Trump that he would have a prosecutor “look into” the company that Trump mentioned. “We will take care of that and will work on the investigation of the case,” Zelensky said, according to that inexact transcript the Trump White House released. It could not be clearer: This was a substantive conversation directly about Trump’s request that the Ukrainians investigate the Bidens and Burisma. Yet the Republicans claim Zelensky did not respond to Trump’s comments about the Bidens. That is, Trump’s remarks about the Bidens were trifling and merited no concern then or now. This telling makes it seem as if nothing would (or could) come of Trump’s reference to the Bidens. In other words, no harm, no foul. But the evidence indicates Zelensky got the message and promised to do what Trump wanted: investigate his political foe.

Other parts of the report can be dissected in this fashion. Republicans are not just taking the position that Trump’s conduct regarding Ukraine does not merit the ultimate political punishment: impeachment. They are saying that black is white. In a practice reminiscent of Soviet revisionism, they are trying to disappear inconvenient facts and rewrite the story to protect their dear leader. The document they have produced is a reiteration of Nunes, Jordan, and co.’s against-the-facts assertion that there is no scandal here—not even a scintilla of scandal—and that the real scandal is the Democrats’ dastardly attempt to oust Trump from office without cause; the Bidens’ corruption in Ukraine; and Kyiv’s plotting against Trump in 2016. Take your pick. But to mount this crusade, the Republicans have to deny or erase evidence—even evidence provided by the Trump White House. Consequently, they have manufactured a report that literally cannot handle the truth.