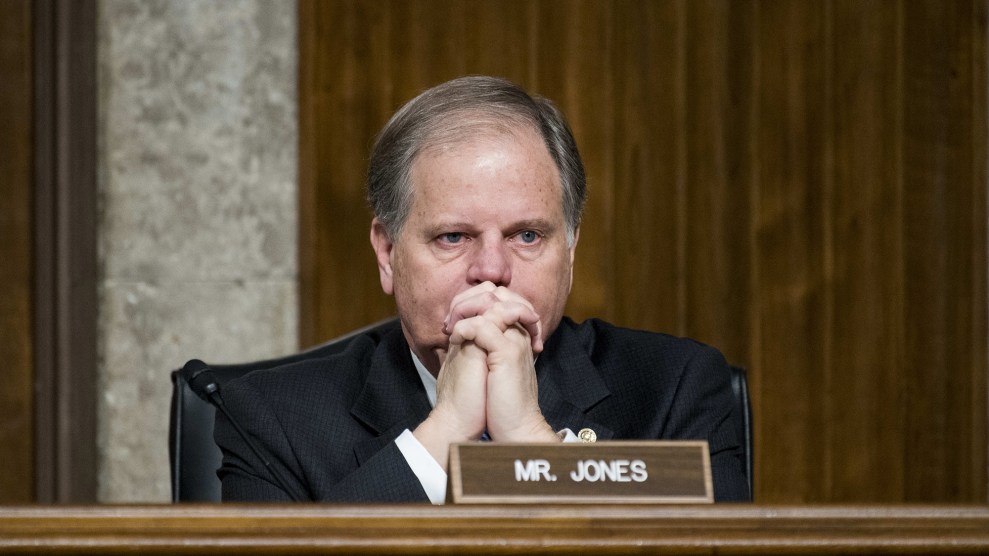 Sen. Doug Jones (D-Ala.),  the most-vulnerable Democratic Senator up for reelection in 2020, trails his main Republican rivals in a new poll conducted ahead of the forthcoming impeachment trial of Donald Trump. But not by as much as might be expected.

Jones won his seat under extraordinary circumstances in 2017 after Donald Trump tapped Jeff Sessions to be attorney general and Alabama Republicans nominated a uniquely weak candidate in Roy Moore, a religious extremist credibly accused of sexually assaulting teenagers. There are multiple Republicans vying to take on Jones in 2020—including Sessions and Moore.

As you might expect in Alabama, Jones trails the strongest Republicans. The best-performing Republican is Tommy Tuberville, a former Auburn University football coach, who leads Jones by seven points. Sessions, who held the seat for 20 years, leads the Democrat by just five points, 46 percent to 41 percent, suggesting his fallout with Trump during his time leading the Justice Department did not go unnoticed back home. A third Republican, Rep. Bradley Byrne, leads Jones by just four points.

Jones would likely prefer a rematch against Moore, whom the poll shows him easily besting 47 percent to 33 percent. Jones is also ahead of Republican state Rep. Arnold Mooney by 6 points. The poll, by JMC Analytics and Polling, was conducted over both landline and text with a 4.3 percent margin of error.

Trump’s impeachment trial promises to make Jones’ reelection effort that much more daunting. A vote to convict could put him crossways with conservative voters in Alabama, while a vote against could anger liberal activists and donors. On Sunday, the senator told ABC’s Martha Raddatz that he has not decided how he will vote on Trump’s removal from office but that his vote would be based on the facts, not political concerns.

Jones said he wants to see “if the dots get connected” between Trump’s request that Ukraine investigate his political opponent and the withholding of military aid for Ukraine. “If that is the case, then I think it’s a serious matter and it’s an impeachable matter,” Jones said. “But if those dots aren’t connected and there are other explanations that I think are consistent with innocence, I will go that way, too.”

Meanwhile, details have emerged that seem to make this quid-pro-quo even more certain. On Saturday morning, a newly-released email showed the Trump White House requesting that the aid be put on hold just two hours after Trump’s July call with the president of Ukraine.

.@MarthaRaddatz: Some say if you vote to impeach Trump in your deeply red state of Alabama, you basically sign your death warrant.

Sen. Doug Jones says "this is a much more serious matter" that shouldn't be discussed in terms of "political consequences." https://t.co/4oxxUovvgW pic.twitter.com/1bLFHLC56V