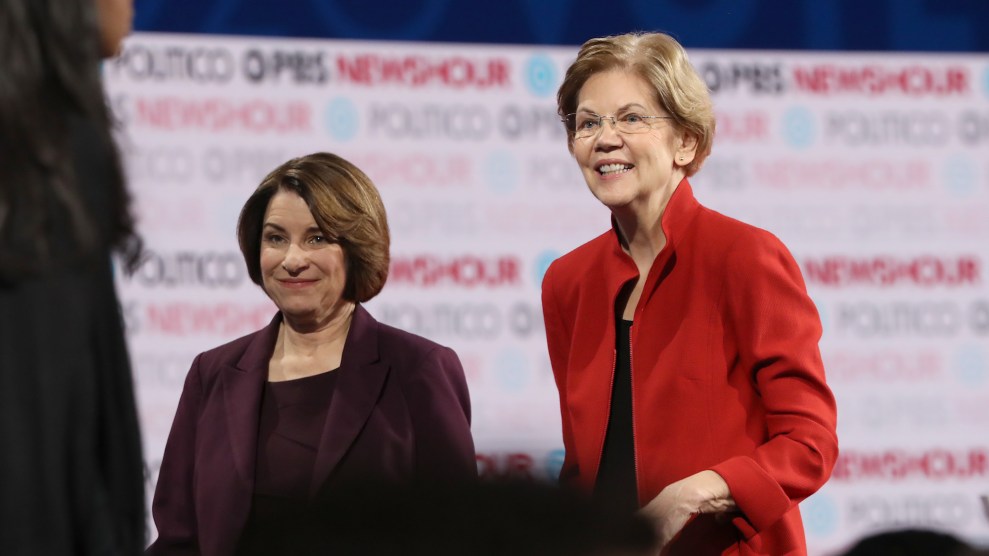 It was supposed to be a cutesy, holiday-themed ending to a debate scheduled dangerously close to Christmas—”in the spirit of the season,” PBS’s Judy Woodruff explained. For the final question of the night, Woodruff gave the seven Democrats on Thursday night’s debate stage an either/or: “A candidate from whom you would ask forgiveness for something—maybe that was said tonight—or a candidate to whom you’d like to give a gift.”

The audience snickered. Businessman Andrew Yang, up first, was speechless, biting his lip as he silently pleaded with his hands. “We could do a labor action and just go on strike on this one, Andrew,” Massachusetts Sen. Elizabeth Warren volunteered.

Finally, Yang spoke. “I don’t think I have much to ask forgiveness for—you all can correct me on this,” he began. He opted for a gift. “I would love to give each of you a copy of my book,” a tome outlining the logic of the “freedom dividend,” his signature proposal for a universal basic income. “If you like data, this book is for you.”

Pete Buttigieg went next, offering a wholesome pivot on the gift option. “We know what a gift it would be for the future of the country for literally anybody up here to become president of the United States compared to what we got,” he said. Sanders opted to give a “very, very different vision” of “a nation based on love and compassion,” while billionaire philanthropist Tom Steyer offered “the gift of teamwork.” Former vice president Joe Biden volunteered something along the lines of making everyone’s lives better. (Buttigieg and Sanders also mentioned that they, too, are the authors of giftable books!)

And who asked for forgiveness, you wonder? The two women on the debate stage: Warren and Minnesota Sen. Amy Klobuchar. “I know there are times when I get really worked up, and sometimes I get a little hot,” Warren said. “I don’t really mean to.” Klobuchar took responsibility not only for her emotions, but the reactions of others to those emotions. “I’d ask for forgiveness anytime any of you get mad at me,” Klobuchar said, fighting back tears. “I can be blunt, but I am doing this because I think it is so important to pick the right candidate here.”

There’s something inspiring about seeing candidates talk about their human moments. There’s something enraging about seeing women candidates be the only ones who do it. This is especially true given that Warren’s and Klobuchar’s respective emotional states have been a subject of fixation among male candidates and the media alike. Last month, Warren endured a news cycle that relentlessly questioned her alleged “anger” after Biden accused Warren of maintaing an “angry unyielding viewpoint,” something media critics quickly identified as sneaky sexism. A round of stories detailing Klobuchar’s alleged acts of rage directed toward her staff raised important questions about her fitness for office. Whether those questions would’ve been raised at all if she were a man is another matter altogether.

Neither female candidate let forgiveness be their last beat on the question. Warren used her answer as a launching pad to talk about her personal, emotional reaction to stories she heard on the campaign trail, from “people who are really down to their last moments.” Klobuchar reinforced the notion she gets “worked up” because she cares so much about a candidate’s responsibility to “bring people along, not shut them out.”

At the end of his remarks, Buttigieg said that his fellow Democrats should rally around the eventual nominee, without doing too much damage in the process. “Let’s make sure there’s not too much to ask for forgiveness for when that day comes,” Buttigieg said. Everyone would do well to heed that advice.