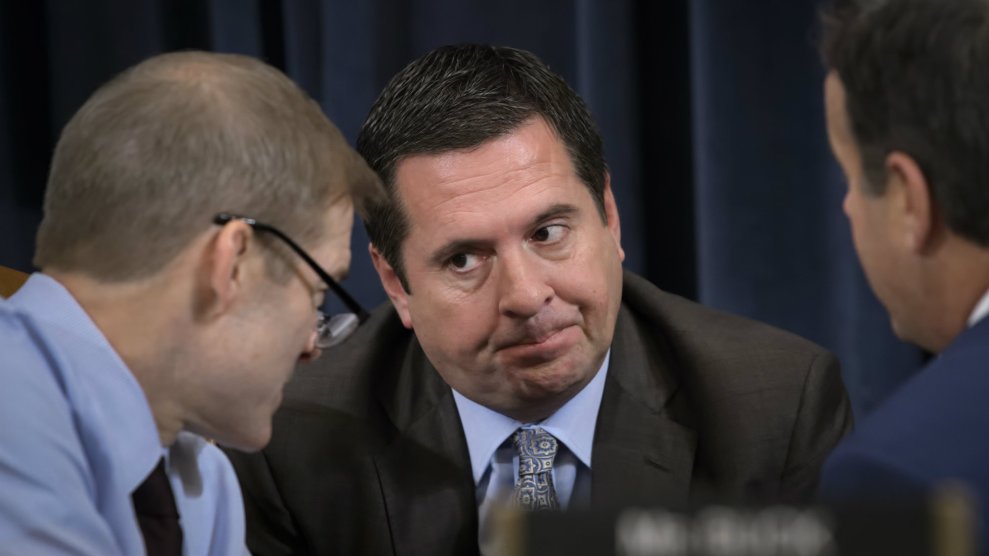 During the House Intelligence Committee’s impeachment hearings last month, Rep. Devin Nunes (R-Calif.), the panel’s ranking member, angrily decried the process. He called the proceedings a “drug deal” concocted by the Democrats for TV ratings and claimed Donald Trump had done nothing wrong in his attempt to get Ukraine to launch investigations that might help his political prospects. All the while, Nunes failed to disclose his own mysterious role in the scandal, which first began to emerge when the Daily Beast reported on the California Republican’s alleged ties to Lev Parnas, the indicted Florida businessman who assisted Rudy Giuliani, Trump’s personal lawyer, in his dirt-digging efforts in Ukraine.

When the House Intelligence Committee released its report on its impeachment inquiry at the beginning of December, Nunes’ involvement in the controversy became even clearer. Not only did the report include phone records indicating calls between Nunes and numbers associated with Giuliani and Parnas (Nunes claims the Parnas calls actually came from a number associated with Parnas’ wife and that he spoke with “someone,” he does not recall who), it also indicated deep ties between Nunes’ office and the White House. At least three former Nunes staffers currently work in the White House. A onetime National Security Council staffer in the Trump White House, meanwhile, currently works for Nunes. The names of all of these officials have surfaced in recent months in connection with the Ukraine scandal, and three of them were mentioned in the intelligence committee report.

Kash Patel, a member of Nunes’ intelligence committee staff, left that role in February to join the Trump administration as a senior adviser on the National Security Council. Politico reported in October that the former Nunes aide (whose responsibilities on the NSC do not involve Ukraine policy) supplied Trump with information on Ukraine that influenced the president’s belief that the country colluded with Democrats to interfere in the 2016 election—a debunked conspiracy theory that the White House and other members of the GOP are still running with. Patel contends that he never spoke with Trump about Ukraine-related matters and has filed a lawsuit against Politico over the story, claiming defamation.

But evidence of Patel’s alleged involvement in the Ukraine scandal popped up again during the House Intelligence Committee’s impeachment hearings. Fiona Hill, a former top NSC official specializing in Russia and Europe, testified that she was told that Trump “may want to speak to Kash” concerning “some materials related to Ukraine.” Hill got the impression that Trump believed Patel was the NSC’s Ukraine director (his job focused on counterterrorism) and said she unsuccessfully tried to clarify if he “had some special…representational role on Ukraine.”According to Hill, Patel had a close relationship to both Trump and Nunes. According to call logs obtained by the intelligence committee and included in its report, Patel communicated with Giuliani on May 10, less than an hour after Giuliani spoke with Kurt Volker, the former US special envoy to Ukraine.

If Patel sounds familiar, that is because it is not the first time his name has surfaced in connection with a controversial effort to advance the president’s political interests. While working for Nunes, he helped to author a controversial and misleading four-page memo that made a number of disputed assertions concerning how the FBI obtained a FISA warrant to investigate former Trump campaign foreign policy adviser Carter Page. The memo appeared to be aimed at derailing the investigation into Russian interference in the 2016 election and it was declassified by Trump over objections from the FBI.

Michael Ellis, who worked for Nunes for a year as a lawyer on the intelligence committee, is one of the two White House officials who fed Nunes the intelligence files that became the basis of the controversial memo that Patel helped author. Ellis joined the White House in March of 2017 as the deputy counsel to the NSC’s top lawyer, John Eisenberg. The House Intelligence Committee sought the testimony of both Ellis and his boss in its impeachment inquiry, but the men are among 10 administration officials who have refused to comply with congressional subpoenas.

Eisenberg was alerted in late July by two senior aides that Gordon Sondland, Trump’s ambassador to the European Union, was improperly pressuring Ukrainian officials to investigate the Bidens. According to the New York Times, Eisenberg and Ellis decided that what Sondland was doing wasn’t a big deal and not worth telling Trump:

But instead of briefing the president, Mr. Eisenberg and his deputy decided that while the efforts of the appointee — Gordon D. Sondland, the ambassador to the European Union — were unorthodox, they were not criminal, according to a person briefed on their decision. Mr. Eisenberg set aside the concerns of the senior aides, one of whom who would go on to describe Mr. Sondland to impeachment investigators as a national security risk because he was so unprepared for his job.

Mr. Eisenberg would come to the same conclusion again and again when confronted with revelations that Mr. Trump had ordered up a shadow Ukraine policy to advance his personal interests: However disturbing the facts, no one involved violated the law.

Another Nunes staffer who appeared in the intelligence committee’s report is Derek Harvey. Before joining Nunes’ staff, Harvey was tapped by Trump’s former national security adviser, Michael Flynn, to serve in the White House as the NSC’s Middle East director. Harvey was dismissed from that role in July 2017 by Flynn’s successor, H.R. McMaster. According to the intelligence committee report, Harvey communicated with Giuliani on May 8, the same day that Giuliani spoke with the White House, Parnas, and John Solomon, a former opinion columnist at The Hill who stoked right-wing conspiracy theories  about Ukraine’s involvement in the 2016 election. But as CNBC reported on November 24—in an article cited in the intelligence committee report—Harvey’s involvement in the Ukraine scandal may go deeper. Parnas’ attorney told CNBC that some of Nunes’ aides scrapped a trip to Ukraine to meet with two Ukrainian prosecutors earlier this year when they realized they would have to disclose the trip to Adam Schiff (D-Calif.), the Democratic chair of the House Intelligence Committee. Once they came to that realization, they asked Parnas to set up Skype and phone meetings with the officials. As a result, Harvey, according to Parnas’ attorney, spoke with the two Ukrainian prosecutors over Skype and in a phone call in March of this year.

Though that particular trip never happened, Harvey, along with Nunes and two other aides, took a trip to Europe in 2018 that; CNN reported this trip allegedly included a stopover in Vienna, where Nunes met with former Ukrainian prosecutor Viktor Shokin. Shokin has been accused of corruption and has promoted the unfounded claim that he was removed from office due to his investigation into Burisma, the Ukrainian energy company on whose board Hunter Biden served. One of the other Nunes aides on that Europe trip, according to congressional records, was Scott Glabe, who at the time was the deputy staff director on the House Intelligence Committee. His tenure under Nunes overlapped with Patel’s, and he joined the White House a couple of weeks after Patel did. Nunes has denied ever meeting Shokin or visiting Vienna during his 2018 trip, but an attorney for Parnas told CNN that his client says otherwise and is willing to testify before Congress. In response to the reporting, Nunes filed a defamation lawsuit against CNN and threatened to sue the Daily Beast.

Neither Patel, Ellis, Harvey, or Glabe responded to a request for comment about their connection to the current Ukraine scandal. Joseph Bondy, Parnas’ attorney, also did not respond to a request to elaborate on his client’s claims about Nunes’ entanglement in current matters involving Ukraine.

Nunes, for his part, has dismissed his involvement in the Trump-Ukraine debacle as a campaign to smear him by the “totally corrupt” news media. But—as with the Trump administration’s efforts to sandbag investigations into the Trump-Russia scandal—the fingerprints of Nunes and his current and former aides appear to be all over the Ukraine controversy.