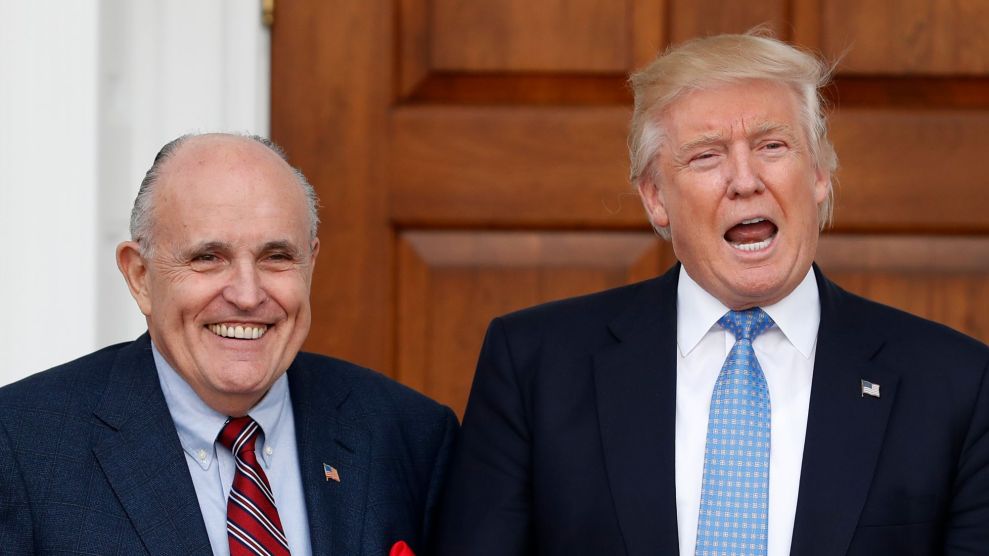 Smoking guns ain’t what they used to be.

Last week, one such smoking gun emerged that should have been a turning point in the Ukraine episode, for this was proof—confirmation—that Donald Trump pressured Ukraine not for any official policy aims, but for his own personal benefit. Yet in the swell of Trump chaos and impeachment news, this new material did not get the full stop-the-presses notice it deserved. And, consequently, it did not alter the overall shape and political dynamics of the Trump-Ukraine scandal. But it should have.

In the days before the impeachment trial kicked off, the House Intelligence Committee released material it had been provided by Lev Parnas, a now-indicted Florida businessman who had worked with Rudy Giuliani, Trump’s personal lawyer, to find dirt on Joe Biden in Ukraine. That trove included a letter that Giuliani sent to Ukrainian president-elect Volodymyr Zelensky on May 10, 2019. In the note, Giuliani identified himself as “private counsel” to Trump. He explained, “Just to be precise, I represent him as a private citizen, not as President of the United States.” He added, “This is quite common under American law because the duties and privileges of a President and a private citizen are not the same.”

Giuliani then had a request for Zelensky: “In my capacity as personal counsel to President Trump and with his knowledge and consent, I request a meeting with you.” The former NYC mayor noted that he would need no more than a half-hour of Zelensky’s time and that he would be accompanied by Victoria Toensing, “a distinguished American attorney who is very familiar with this matter.” Giuliani did not describe the “matter,” but he told the New York Times at the time that he was heading to Ukraine on a hunt for derogatory material on Biden and for information that could support a nutty conspiracy theory that Ukraine—not Russia—was somehow responsible for the 2016 hack of the Democratic Party.

The letter demonstrates two things: Giuliani is a liar, and the pressure campaign on Kyiv, from the start, was mounted to serve Trump’s personal gains, not the foreign policy interests of the United States.

Giuliani was lying. The letter proves he had reached out to Zelensky on his own initiative as part of an effort to help Trump privately. He had not been drawn in by the State Department to assist with some ongoing diplomatic initiative. He was freebooting for Trump.

Giuliani never got his meeting with Zelensky. But shortly after he sent that May letter, something else happened. Gordon Sondland—the hotelier who donated $1 million to Trump’s inauguration and who then was appointed ambassador to the European Union—and other senior US officials met with Trump at the White House to discuss enhancing the relationship between Trump and Zelensky. “Talk with Rudy,” Trump told them, according to Sondland’s testimony. And Giuliani subsequently conveyed a request to Sondland that the ambassador saw as part of a “quid pro quo”: Ukraine would have to announce investigations related to Biden and to that conspiracy theory about the 2016 hack. Only then, it was clear to Sondland, would Trump agree to meet with Zelensky. (Later on, the withholding of nearly $400 million in military assistance would become part of the investigations-or-no-dice scheme.)

Trump and his defenders—especially House Republicans, such as Reps. Devin Nunes and Jim Jordan—have repeatedly claimed (often very loudly) that Trump was merely pushing the Ukrainian government to address corruption within its ranks and that it was well within his duties (and obligations) as president to do so. That is, he was acting in an official capacity to advance the nation’s foreign policy interests.

Giuliani’s letter—which has been cited at the Senate impeachment trial by Rep. Adam Schiff (D-Calif), the lead House impeachment manager—blows that argument to smithereens. Trump, through his personal attorney, was requesting information from Zelensky that would help Trump as a “private citizen.” There was nothing official about this. Yet, as other testimony and evidence show, Trump then used official actions—an Oval Office meeting, military aid passed by Congress—as leverage in this “private” effort. Trump’s personal lawyer, with this letter, makes a strong case against his client.

This letter, though, is not the first smoking gun in the Ukraine scandal. The quasi-transcript of Trump’s July 25 call with Zelensky was another one. It showed that when Zelensky raised the subject of Ukraine obtaining more anti-tank missiles from the United States, Trump uttered that now-famous reply: “I would like you to do us a favor though.” He proceeded to ask Zelensky for those investigations on Biden and the baseless Ukraine hacking conspiracy theory.

This document was explosive, portraying Trump leaning on Zelensky in a mobster-like fashion. Its release in September fueled the drive toward impeachment. But Trump and his acolytes resorted to their go-to play: deny reality. They claimed the transcript—and it wasn’t a verbatim transcript—showed the opposite: There was no quid pro quo. Trump has insisted this document proves the call was “beautiful” and “perfect.” It was as if he and his amen choir saw a gun with smoke coming out of its barrel and said, “Oh, look, a shining new golf club.” (Trump has also claimed he knew nothing about Giuliani’s letter to Zelensky.)

On August 5, 1974, President Richard Nixon, after losing a fight before the Supreme Court, released what would become known as the Smoking Gun tape. On this recording of a meeting between Nixon and his chief of staff, H.R. Haldeman, Nixon—six days after the Watergate burglary—ordered the FBI to abandon its investigation of the break-in. It was undeniable evidence that Nixon himself was behind the Watergate cover-up.

Republicans back then accepted that this tape was game-set-match. They did not argue that Nixon had not said what he said or that the tape was not the incriminating proof it was. Following the release of the tape, 11 GOPers on the House Judiciary Committee declared they would flip their votes and support the impeachment of Nixon. That smoking gun ended Nixon’s presidency. He resigned three days after its release.

Nowadays, in the era of Trump post-modern relativism, Trump and his Republican fanboys, if confronted with a smoking gun, pretend (and insist) it isn’t there. (The parrot is not dead.) As silly as it may seem, the confusion and clutter they create with these absurd denials do serve a purpose. With all this noise, it becomes harder for clear-as-day evidence to be seen clearly within the never-ending media maelstrom. Their goal, after all, is to stir a debate over reality; that prevents a debate over what reality means and what should be done about it. The quasi-transcript, the Giuliani letter, the damaging testimony—it’s smoke, and it’s fire. Case closed—or it ought to be. But by refusing to acknowledge all this slam-dunk evidence, Trump and his cultists are doing all they can to keep an entire nation inside a house that is burning down.