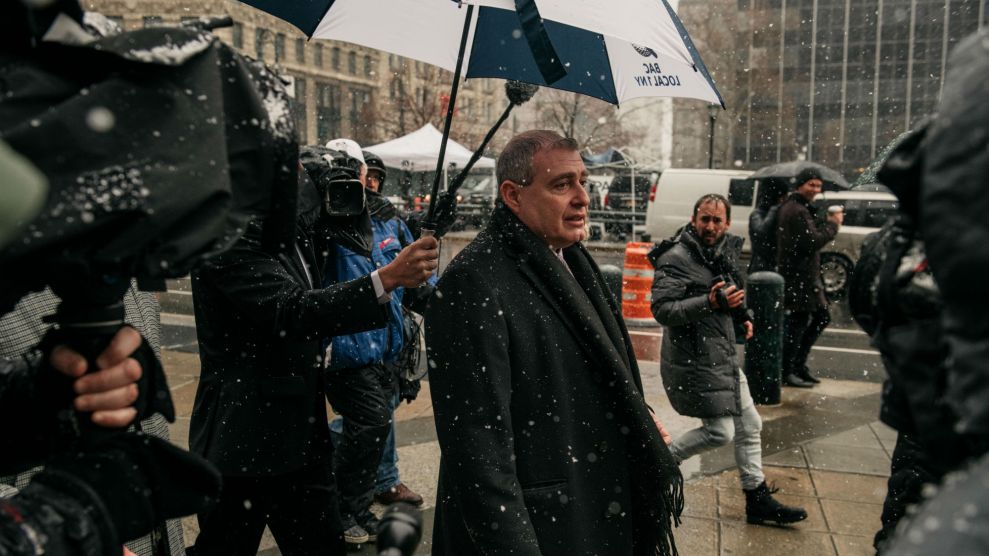 A billionaire Republican donor helped to bankroll travel by Lev Parnas, the indicted associate of Rudy Giuliani, as Parnas maneuvered to press the Ukrainian government to announce investigations that would help President Donald Trump politically.

House Democrats on Wednesday released WhatsApp messages between Parnas and Harry Sargeant III, an oil and shipping magnate who lives in Florida, as part of a trove of material they recently obtained from Parnas. The messages show that Sargeant helped fund some of Parnas’ travel and was supportive of efforts by Parnas and Giuliani to convince Trump to remove US Ambassador to Ukraine Marie Yovanovitch. Parnas and Giuliani have said they believed Yovanovitch’s removal would help them pressure Ukraine’s government to provide dirt on Trump’s foes. Sargeant, a financial backer of Giuliani’s 2008 presidential campaign, is friendly with the former New York mayor. Sargeant met Parnas through Giuliani, a source said.

In a statement Wednesday, Chris Kise, an attorney representing Sargeant, confirmed the billionaire had loaned Parnas money for some of his travel costs. Kise said that Sargeant had expected to be paid back and suggested that Sargeant had been duped by Parnas.

“As is evident from the texts, Mr. Sargeant loaned Lev Parnas small sums for travel expenses because Mr. Parnas claimed, perhaps falsely, he was broke, and promised to pay the funds back,” Kise said. “But despite repeated requests by Mr. Sargeant, and continual promises of repayment by Lev Parnas, Mr. Parnas never repaid these expenses.” Kise cited an August 26 message in which Sargeant urged Parnas to repay debts to him and to the owner of a charter flight company.

If accurate, Kise’s statement suggests Sargeant was one of several wealthy individuals Parnas convinced to help finance a jet-setting lifestyle. Dmitry Firtash, a Ukrainian oligarch, appears to have paid Parnas more than $1 million last year. Parnas also has a string of debts in Florida, where he lives, including $350,000 owed to a couple who say he convinced them to help finance a movie. They have sued Parnas and have accused him of conning them.

Previous reporting has revealed that Sargeant over the last year interacted with Parnas, whose frenetic activity included lavishing campaign donations on Trump and other Republicans, regular travel to Ukraine to help Giuliani pressure Ukrainian officials, and pursuit of business deals in Ukraine and Kazakhstan. Sargeant has downplayed his relationship with Parnas and has denied involvement in Parnas and Giuliani’s Ukrainian machinations.

In an April 2, 2019, WhatsApp message, Parnas asked Sargeant to “approve” payment for a car service, adding that “we got a deal from Rudy’s guy.” Sargeant told Parnas not to “bother w this stuff pls.” It’s not clear if he approved the expense.

About a week later, Parnas seemed to complain to Sargeant that a trip he planned, and apparently billed to Sargeant, had been canceled. Parnas said he was about to meet with Giuliani and indicated the cancelation would interrupt his plans to hold meetings “on Saturday in Vienna.”

It is not clear if Parnas traveled to Vienna on this occasion or who he planned to meet. But in June, Parnas met in Vienna with Firtash, a Ukrainian gas magnate who is under house arrest there while he fights extradition to the United States, where he faces federal bribery charges. Parnas told MSNBC’s Rachel Maddow on Tuesday that in that meeting, he had urged Firtash to agree to a deal: Firtash would hire two Trump allies, Joe diGenova and Victoria Toensing, a husband-and-wife legal team, who would use their ties to Attorney General William Barr to get Firtash’s case dropped. In exchange, Firtash would help dig up dirt in Ukraine on Trump’s political foes.

Though it may sound outlandish, some pieces of this proposal appear to have been carried out. Firtash replaced his American attorneys with Toensing and diGenova in July. In late August, the duo secured a meeting with Barr in which they pushed for the DOJ to drop Firtash’s prosecution, though Barr did not agree to that request. And Firtash’s lawyers in Vienna did obtain, as part of his legal battle in Austria against extradition, an affidavit from Viktor Shokin, the former Ukrainian prosecutor whose 2016 firing Joe Biden had advocated. In that affidavit, Shokin leveled new accusations about the former vice president. Giuliani then touted those claims as a major revelation.

A DOJ spokesperson on Wednesday denied Parnas’ claims regarding Barr. In a statement Thursday, Mark Corallo, a spokesperson for Toensing and diGenova, did not directly address Parnas’ account. “Victoria Toensing and Joseph diGenova were retained by Mr. Firtash to represent him in his case in US District Court in Chicago and to present facts to Justice Department leadership detailing the false and misleading evidence presented by Justice Department lawyers to the Austrian court,” Corallo said.

The WhatsApp messages also show that Sargeant applauded Parnas’ efforts to oust Yovanovitch. On March 23, Parnas texted Sargeant: “She’s gone.” Sargeant wrote back, “AWESOME!!!” Yovanovitch was not actually removed then. But on April 23, Parnas, tipped by Giuliani, informed Sargeant: “The bomb is dropping tomorrow.” Yovanovitch said in House testimony that she was informed of her ouster on April 24.

In June, Parnas texted Sargeant: “Come meet me in Ukraine next week like Wednesday or Thursday.” Sargeant seemed interested: “I could leave Thur and be there Friday maybe.”

Patrick Dorton, Sargeant’s spokesperson, said the billionaire did not go to Ukraine then and has not been to that country for more than a decade. Dorton said he didn’t know why Sargeant told Parnas he might be willing to make the trip.