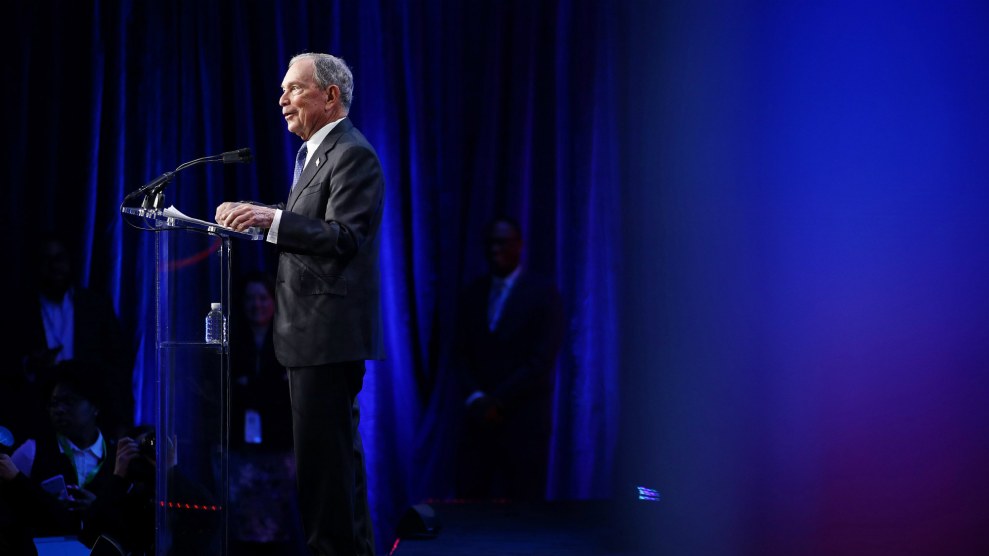 Michael Bloomberg’s presidential campaign has been buying ads at a voracious pace—more than a quarter billion dollars’ worth in barely three months of campaigning—but his nearly limitless appetite doesn’t just threaten to overwhelm his opponents with his message. It could change the ad markets themselves.

Even online, advertising space is not unlimited, and Bloomberg’s deluge of spending threatens to swamp all other potential advertisers—political or not—and drive up the price of buying an ad. That could prevent other candidates with smaller war chests from getting their messages out, and it could really put a dent in advertising from super-PACs and other outside spending groups that will likely see the ad rates they pay skyrocket.

“It’s a supply-and-demand business,” says Steve Passwaiter, general manager of CMAG, the political advertising division of ad-tracking firm Kantar Media. “There’s only so much inventory, and when it’s gone it’s gone. Obviously, as the inventory disappears, the cost goes up and up and up.”

Of course, Bloomberg isn’t alone in his big spending. Democratic candidate Tom Steyer has been aggressively shelling out since he jumped into the race last August, and President Donald Trump has pledged to spend upward of $1 billion on his reelection campaign. (Although Trump partially self-funded his campaign in 2016, he is not doing so this year.) But Bloomberg has dropped an unprecedented amount of money in a very short period of time, racking up expenditures on a scale that’s usually not seen until the closing months of the general election. Unlike Bloomberg’s apparent ad buy budget, the amount of ad space available for purchase is actually strictly limited—candidates want their ads to run at very specific times and on very specific television stations. Some early voting states, like New Hampshire, have only one in-state television network, putting a real premium on the ad time available on that station.

We’ve never seen spending like Bloomberg’s this early in a race, Passwaiter says, noting that both Bloomberg and Trump have bought ads on national networks, as opposed to just specific local markets. Nationwide advertising doesn’t usually happen until late in the election, and Passwaiter has never seen a political candidate buying national airtime during the Super Bowl, as both Trump and Bloomberg have done.

The Super Bowl ads aren’t going to box other candidates out of any markets—Bernie Sanders and Amy Klobuchar were unlikely to drop $5 million or more on a Super Bowl spot—but the high volume of ad buys in smaller markets could, especially come Super Tuesday.

“It’s a supply-and-demand business. There’s only so much inventory, and when it’s gone it’s gone.”

Bloomberg has opted to skip the four early voting states. Instead, he’s buying heavily in the states that vote on Super Tuesday, March 3. That’s when his rivals could really find themselves crowded out of ad markets, particularly in smaller Super Tuesday states like Maine and Oklahoma.

“At some point, a subset of the current group of candidates is going to emerge from those first four states, and then they will likely have to run into the buzzsaw that is Michael Bloomberg,” Passwaiter says.

There will be intense competition for ad time in Super Tuesday states. Even if the inventory of available ads doesn’t run out, ad rates will begin rising, since they go up as ads are purchased. That could pinch campaigns with less deep pockets than Bloomberg’s. But it could really hamper other would-be advertisers. That’s because candidates for office are charged the lowest available rate for a particular block of ad time. Everyone else will see their rates skyrocket. Passwaiter predicts that all the political spending will begin crowding out traditional advertisers—businesses like car dealerships and furniture stores. According to a CMAG report, the number of car ads dipped dramatically in the weeks before the last election, and in key battleground states, political ads accounted for almost half of the ads run during nightly news broadcasts.

Ironically, the ad buying of three big-spending billionaires could actually dilute some of the effects of the Supreme Court’s Citizens United decision—which ushered in a flood of outside spending on political campaigns—by making it much more expensive for super-PACs to buy airtime. As candidates spend more, the rate super-PACs have to pay will jump, potentially limiting their effective buying power.

There’s one clear winner from the media blitz by Bloomberg and his billionaire rivals: TV networks. “If you own a television station in one of the Super Tuesday states, I’d say everyone is ordering filet mignon for lunch,” Passwaiter says.

Bloomberg isn’t just flooding the airwaves, though. He’s also purchased a barrage of digital ads—about $45 million worth, almost twice as much as the next biggest Democratic spender, Steyer, according to digital ad tracking site Acronym. The market for digital ads may be more flexible, but it is not unlimited. Ken Dawson, president of digital advertising firm Eleventy Marketing, which worked with Ben Carson’s campaign in 2016, says that platforms like Facebook will eventually choke off the number of political ads showing up on people’s feeds.

“All the platforms do the same,” Dawson says. “They do a good job of balancing the consumer experience. There is a finite amount of inventory, and no doubt they flex into demand, but they do cap it. They’re only going to give you so much.”

Unlike with television ads, which will be viewed by anyone watching a specific program at a specific time, with online ads campaigns can target specific types of Facebook or Instagram users, and the market for those particular eyeballs is even more limited, Dawson says. Trump’s campaign won’t be targeting the same users as Bloomberg’s, and it’s unlikely that a campaign could buy up all the ads, Dawson says, but big spends can certainly can drive up the price to an unreasonable level for specific audiences. And unlike with television, which gives campaigns the advantage of paying the lowest available rate, everyone gets thrown into an open auction to buy space online. Big Bloomberg buys make it much more expensive for everyone, Dawson says, including rival campaigns.

Bloomberg is also buying a different kind of digital ad. Candidates tend to mix their online ads with fundraising appeals. Even Steyer, whose campaign doesn’t need the money, was forced to because the Democratic debates have required participants to show they have certain numbers of individual donors. Bloomberg isn’t even doing that, instead focusing purely on his message, and attacks on Trump. (He’s opted not to take part in the debates.) But Dawson says this creates a bit of a mystery. Digital advertising allows a campaign to closely track supporters’ level of interest; traditionally, nothing has been as good of a sign of serious interest as when an ad can goad a supporter into donating. Bloomberg’s strategy prevents him from getting that information.

“How do you justify the spending of any marketing dollar without that feedback loop?” Dawson asks. “I can go buy eyeballs all day long, but how do I measure the success of my campaign if I don’t understand if people are willing to jump in? You can spend a quarter billion on Facebook in this cycle, and show all these engagement numbers, but I’m not sure it’s indicative of true support when it comes time to cast a vote.”

In recent decades, the candidate who raises the most money almost always wins. And self-funded candidates lose far more often than they win. Spending lots of your own money is not necessarily a key to success, says Sheila Krumholz, executive director of the nonpartisan Center for Responsive Politics.

Democratic candidates have increasingly eschewed help from super-PACs and corporate PACs. That does create a unique opening for self-funded candidates, Krumholz says. But as disruptive as Bloomberg’s spending might be, she’s not sure it represents a long-term change in campaign finance, even after seeing Trump’s partially self-funded success in 2016. She points to Steyer as an example.

“Steyer has had to pay so much to get where he is,” she says, “which is still, you know, back of the pack.” She adds, “It still seems to me you need to have a lot of money and also the right characteristics.”