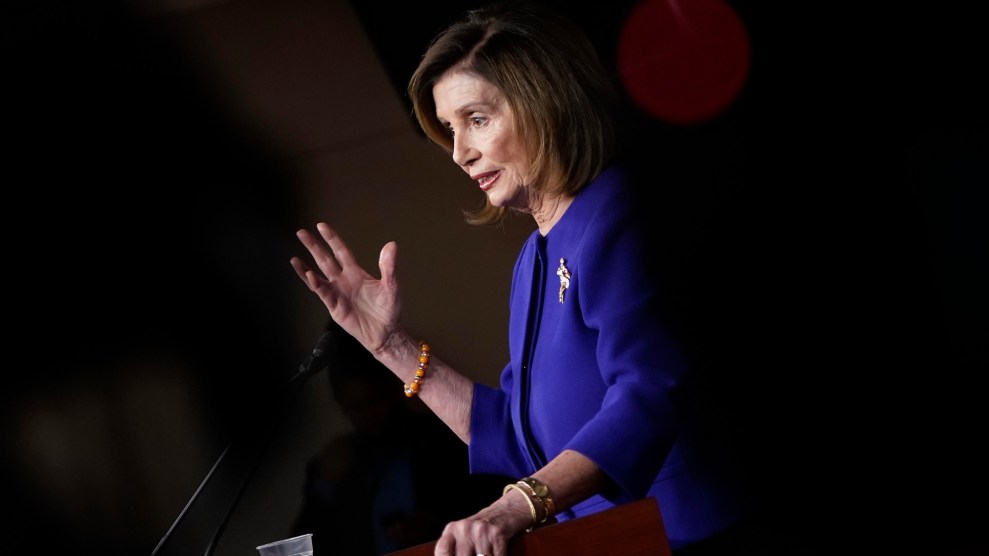 The House approved a resolution on Thursday to restrain President Donald Trump from attacking Iran, giving lawmakers a mostly symbolic opportunity to rebuke the White House’s increasingly unchecked authority to conduct war. Unlike a binding resolution that could have forced Trump’s hand in a meaningful way—or at least challenged him to veto it—Thursday’s measure signaled a far more timid approach.

The resolution, which passed the House on a 224–194 vote, invoked the 1973 War Powers Act, but was structured as a concurrent resolution, meaning it won’t require Trump’s signature or carry the force of law. “The Congress of the United States, in its full power and full voice, can speak in a united way about what the war powers should look like—and that should count for something,” Speaker Nancy Pelosi (D-Calif.) said in a speech on the House floor. As a privileged resolution, the Senate will have to take up the bill, where it is expected to come down to a narrow vote. Republicans can only withstand three defectors and two GOP senators, Mike Lee (Utah) and Rand Paul (Kentucky), have already said they will support it.

Sure, a debate about war powers is important and a formal rebuke from Congress is a way to show people both in this country and abroad that not everyone approves of the Trump administration’s hawkish approach to Iran. But this resolution won’t curb Trump’s authority. Only a veto-proof piece of legislation can do that, though apparently House Democrats think this measure can be an exception to that rule. “Constitutionally, the President cannot take America into a war until he has a declaration of war or authorization from Congress,” a Democratic aide told CNN. “If both Houses of Congress concurrently tell the President he cannot continue hostilities, there should be no doubt that the President must come to Congress for legal authorization before taking us to war.”

That’s by no means a settled fact. As CNN noted, “the question has not been tested in the courts.” This weak strategy, relying on an unproven legal argument to bolster a non-binding resolution, makes one wonder why Democrats did not take a stronger line weeks ago when they had a different opportunity to rein in Trump’s war powers.

The left flank of House Democrats had tried to do that earlier last year. The initial version of the annual National Defense Authorization Act, which cleared the House in July on a party-line vote, contained provisions that would have blocked Trump from starting a war with Iran unless Congress approved it.

There were two amendments stripped from the NDAA that could have prevented tonight's escalation.

My amendment to prevent funding for war with Iran without Congressional approval.@BLeeForCongress's amendment to repeal the 2001 AUMF.

The version passed by the GOP-controlled Senate, however, did not include those restrictions. When representatives from the two chambers of Congress met in the fall to hash out a compromise bill, the limitations on Trump’s war powers were cut out. Congress has passed the NDAA for nearly 60 straight years, usually with bipartisan majorities, and no one thought House Democrats’ progressive bill would pass muster with a Republican Senate without substantial changes. As I reported in December, “The only big item from the progressives’ agenda that Democrats did secure was a commitment to grant federal employees 12 weeks of paid parental leave, but that came in exchange for approval to create Trump’s Space Force.”

That compromise was acceptable to Pelosi and other members of House leadership, even though it cut out policies supported by the party’s progressive wing, such as the Iran amendment and limits on Trump’s ability to use Pentagon funds to build his border wall. “Ultimately,” a Democratic aide close to the negotiations told me at the time, “for every progressive policy not included in the conference report, the blame rests with the Republican Senate and White House who refused to budge on these issues.”

The House passed the compromise package with 377 votes. Only 41 Democrats opposed it.

If Democrats truly believed Trump’s approach to Iran was reckless and wanted to block it, they would have fought to keep this provision in the bill back in December. They chose not do so, and the chances of that changing appear slim for now, though the fight is not over. Last week, Sen. Bernie Sanders (I-Vt.) and Rep. Ro Khanna (D-Calif.) reintroduced that legislation as a standalone bill. “After authorizing a disastrous, $738 billion military budget that placed no restrictions on this president from starting an unauthorized war with Iran,,” the lawmakers said in a joint statement, “Congress now has an opportunity to change course.” Their bill faces the same hurdles as any legislation making its way from the Democratic House to the Republican Senate. Even if the Senate passed it, it would likely require a veto-proof majority to overcome Trump’s opposition. Those are long odds, but one wonders why Democratic leadership wouldn’t take them over a non-binding resolution.