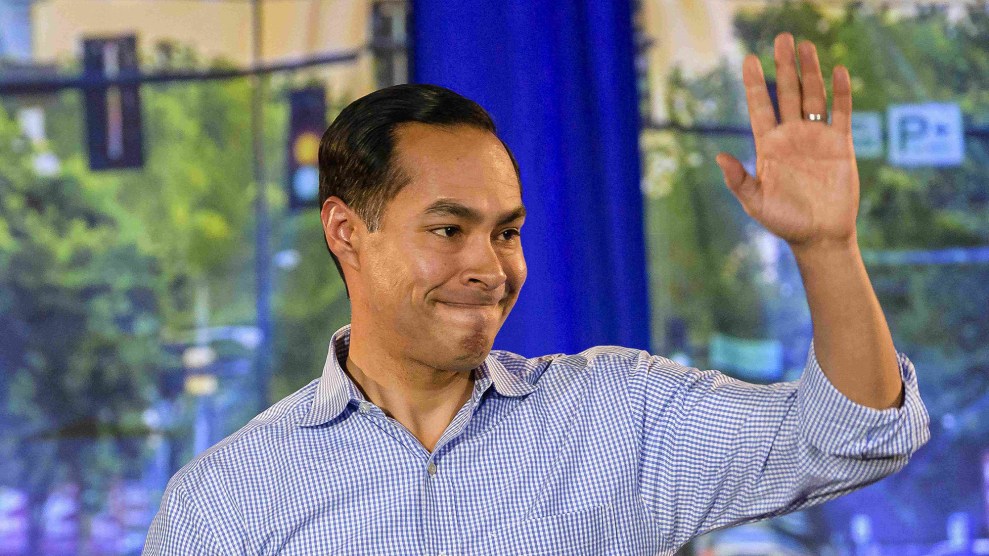 Former San Antonio Mayor Julián Castro dropped out of the Democratic presidential race on Thursday morning. Castro, who served as Housing and Urban Development secretary under President Barack Obama, told supporters in a video that “it simply isn’t our time.”

It’s with profound gratitude to all of our supporters that I suspend my campaign for president today.

I’m so proud of everything we’ve accomplished together. I’m going to keep fighting for an America where everyone counts—I hope you’ll join me in that fight. pic.twitter.com/jXQLJa3AdC

Castro, the only Latino candidate in the race, was facing an increasingly limited path forward. He hadn’t been on a debate stage since mid-October, and he wouldn’t have been on the next one either. He didn’t raise a lot of money. Campaigns are zero-sum, and Castro had an oxygen problem. There was room in the top tier for one up-and-coming red-state ex-mayor—but apparently not for two.

For all his struggles, Castro carved out a place for himself in the field as a progressive policy advocate, pushing out aggressive platforms on homelessness, criminal justice, and immigration. His interview with my colleague Fernanda Echavarri, after Castro visited a refugee camp in Matamoros, Mexico, is worth revisiting for a glimpse at the kind of campaign he ran. And it wasn’t just the way he tried to highlight the human toll of Trump’s policies; he also looked critically at the administration he had served in. Though a heavy-handed jab at Joe Biden’s memory got the most immediate reaction during a September debate, his persistence in challenging the former vice president’s support for deportations during the Obama administration was a better reflection of how Castro operated as a candidate. Once maligned as overly cautious, he showed a willingness to take on his own party over its failures.

In the final weeks of his race, he even criticized the nominating process itself for giving undue power to the overwhelmingly white electorates in Iowa and New Hampshire—a tradition, he said, that did “not reflect our nation’s diversity.” It was a bit of deliberate provocation from a candidate who wasn’t going to win either of those places, but it wasn’t wrong.

Where he goes from here is unclear. The filing deadline to run for office in Texas in 2020 has passed. But though it’s been more than a decade since he was first anointed as a rising star, he’s still just 45, with stints as a Cabinet secretary and as mayor of the nation’s seventh-largest city under his belt. So it’s a fair bet he’ll probably be back—you might even hear his name this summer, when the primary winner picks a running mate.