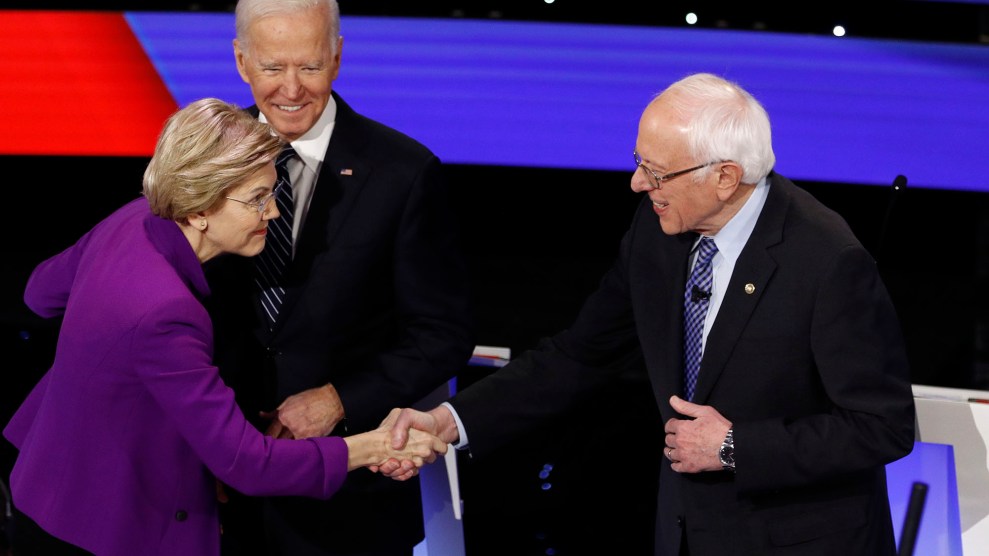 Before the moderators at the Tuesday’s Democratic presidential debate got to the issue currently roiling the primary, they offered up a healthy serving of vegetables. First, the CNN and Des Moines Register journalists asked about the prospect of war with Iran and the use of military force in the Middle East. Then they asked about trade. And then, about 40 minutes in, came this:

Bernie Sanders was asked about Elizabeth Warren’s charge that he had told her a woman could not beat Donald Trump.

“As a matter of fact, I didn’t say it,” Sanders said, adding that even talking about it was “what Donald Trump and maybe some of the media want.”

“Hillary Clinton won the popular vote by 3 million votes,” he noted. “How could anybody in a million years not believe that a woman could become president the United States? And let me be very clear: If any of the women on this stage or any of the men on this stage win the nomination—I hope that’s not the case, I hope it’s me—but if they do, I will do everything in my power to make sure that they are elected in order to defeat the most dangerous president in the history of this country.”

Warren was asked to respond.

“Bernie is my friend, and I am not here to try to fight with Bernie,” she said. “But look, this question of a whether or not a woman can be president has been raised, and it’s time for us to attack it head on. And I think the best way to talk about who can win is by looking at people’s winning record.”

Warren then did just that, asking the audience to “look at the men on this stage.”

“Collectively they have lost 10 elections,” she noted, referring to Sanders, Pete Buttigieg, and Joe Biden. “The only people on this stage who have won every single election that they’ve been in are the women: Amy [Klobuchar] and me. And the only person on this stage who has beaten an incumbent Republican any time in the past 30 years is me.”

.@ewarren: "Can a woman beat Donald Trump? Look at the men on this stage. Collectively, they have lost 10 elections. The only people on this stage who have won every single election that they have been in are the women: Amy and me." #DemocraticDebate pic.twitter.com/2QjVcgzh0k

Sanders later jumped in to dispute Warren’s claim, noting that he beat a Republican incumbent for a seat in the House of Representatives. Warren looked confused.

“And I said, I was the only one who’s beaten an incumbent Republican in 30 years.”

Debate stages aren’t built for nuance. Warren’s stat about her male opponents losing “10 elections” includes, for instance, Sanders’ failed campaigns as a gadfly third-party candidate in Vermont in the 1970s—hardly a test of electoral mettle. And beating a former Cosmopolitan centerfold in Massachusetts with Barack Obama on the ballot is a lot easier than what the candidates are proposing to do next fall.

But it’s a significant moment for both campaigns, and a chance for Warren to tackle head-on an idea that has hovered over the primary like a fog—the misplaced fear among some voters that after Clinton’s 2016 loss, the party would be taking a risk if it nominated a woman again.

At a town hall last April, Warren was asked about the prospect of getting “Hillary’d.”

“I don’t think it’s right, but I think that the fact that we have the person in the White House that we do, it is evidence that the country is not quite totally ready for a woman,” a New Hampshire voter told NPR in April.

Warren and Sanders might not have done much to heal the bad blood (at least online) between their supporters. But maybe Democrats at least took some steps toward dispelling one of 2016’s most pernicious canards.