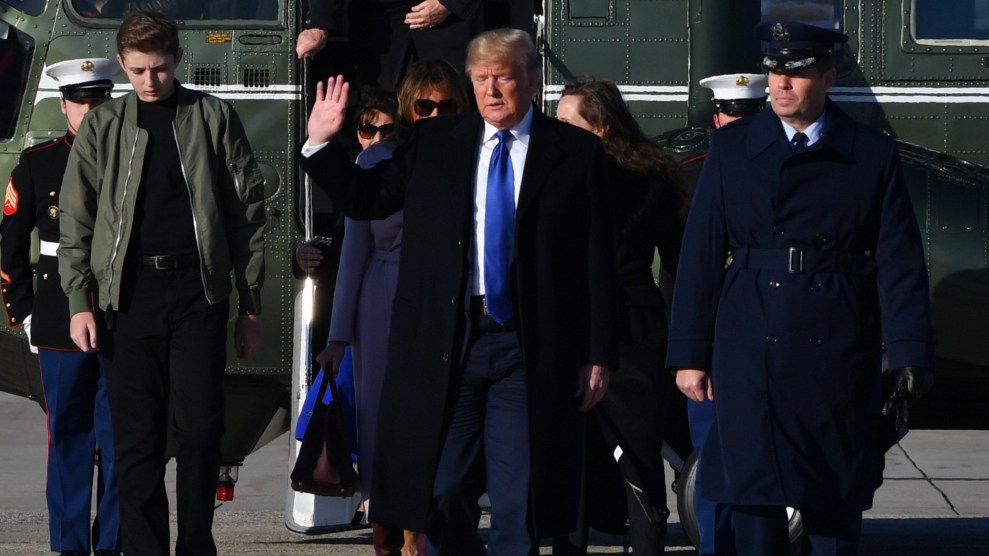 President Donald Trump downplayed the possible traumatic brain injuries suffered by nearly a dozen US troops earlier this month after Iran fired missiles at two military bases in Iraq. “I heard that they had headaches, and a couple of other things,” he told reporters at the World Economic Forum in Davos. “But I would say, and I can report, that it is not very serious.”

Last week, the Pentagon confirmed that 11 soldiers at Ain al-Asad air base in western Iraq had suffered concussions and were being screened for traumatic brain injury, contradicting Trump’s initial assessment following the attack that “no Americans were harmed.” Trump said Wednesday that he was told about those possible injuries “numerous days later” and reiterated his belief that the concussions were not very serious “relative to other injuries” he had seen. “I’ve seen people with no legs and with no arms,” he said. “I consider them to be really bad injuries.”

But that is not the experience of veterans, who regularly deal with the consequences of traumatic brain injury, or TBI, suffered during combat, many of which can go unreported. “TBI is the signature wound of today’s wars,” a Center for a New American Security report found in 2018. “While a relatively low-level concern at the start of the wars in Iraq and Afghanistan, by 2007 head injuries exceeded chest or abdominal injuries as those most treated by the U.S. military.” As Trump somewhat mockingly noted, headaches are a component of TBI, but dizziness, memory loss, and irritability are also common symptoms.

More than 408,000 service members have been diagnosed with a serious brain injury and the actual number of personnel affected is probably much higher, the Military Times reported. Part of the problem is a stigma among service members against reporting head injuries, but the military itself also has not always rigorously tested for them. “Before June 2010, TBI screening was not routinely implemented in Afghanistan or Iraq, and there were no standardized provisions for recurrent TBI prevention or treatment,” a 2017 study found. “Return-to-duty decisions were generally left to line commanders, not medical providers. Thus, many injuries were not immediately reported.”

Trump has often bragged about “taking care of every warrior that returns home as a veteran,” but he has shown less interest in taking concussions seriously despite considerable research about the serious and negative impact of repeated blows to the head. After years of complaints and study of NFL players, stricter rules to prevent concussions were enacted. During a campaign rally in October 2016, he mocked the league for doing so. “We don’t go by these new, and very much softer, NFL rules,” he said. “Concussions—’Uh oh, got a little ding on the head? No, no, you can’t play for the rest of the season’—our people are tough.”

His comments come at a time when the military has embarked on new efforts to study head injuries and encourage service members to report them, as some veterans noted on Twitter.  But it requires buy-in from troops who may take their lead from a commander-in-chief with a much simpler, and more dangerous, view.