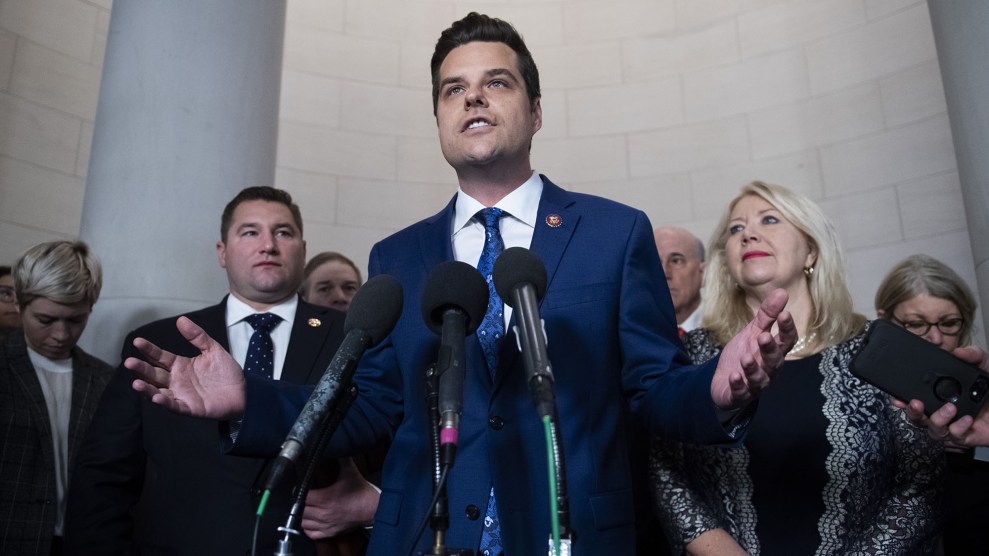 A few days ago, Rep. Matt Gaetz (R-Fla.) broke with most members of his party to support a House resolution that seeks to restrict Donald Trump’s use of military force against Iran unless the president obtains congressional approval. Gaetz’s support was noteworthy, because he has (proudly) built a reputation as Trump’s most eager defender in Washington, and because Trump himself called the bill a “Democratic fraud.”

Gaetz’s support for the resolution did not go over well with his fellow Republicans. But you can’t appreciate just how poorly it went over until you read this Washington Post story about the behind-the-scenes opposition. In response to a letter asking his colleagues to sign on to the measure, a succession of GOP staffers took turns trashing it in the kind of language one might expect to hear on Fox News, and a White House staffer told the paper that Gaetz’s support for it had left him in the dog house:

A senior White House official said it was “super uncool” and “quite unwise” for Gaetz to push for limits on the president’s authority. This person added that White House officials would not be returning Gaetz’s phone calls, text messages, “smoke signals or his kneelings in the snow.”

“Super uncool.” My God. Is this is a debate about constitutional powers or an episode of “The Californians“?

There’s an old Norse adage: “Write every email as if it will someday be read back to you in a deposition.” These Republican staffers all seem to be abiding by its Trumpian corollary—write every email with the expectation that the president might see it on TV.

But Gaetz can take some comfort knowing that he won’t be the only Republican getting ghosted by the president. On Saturday, Utah Sen. Mike Lee confirmed that he was signing onto Vermont Sen. Bernie Sanders’ “No War Against Iran Act,” which would cut off funding for military operations unless Trump obtains congressional authorization.