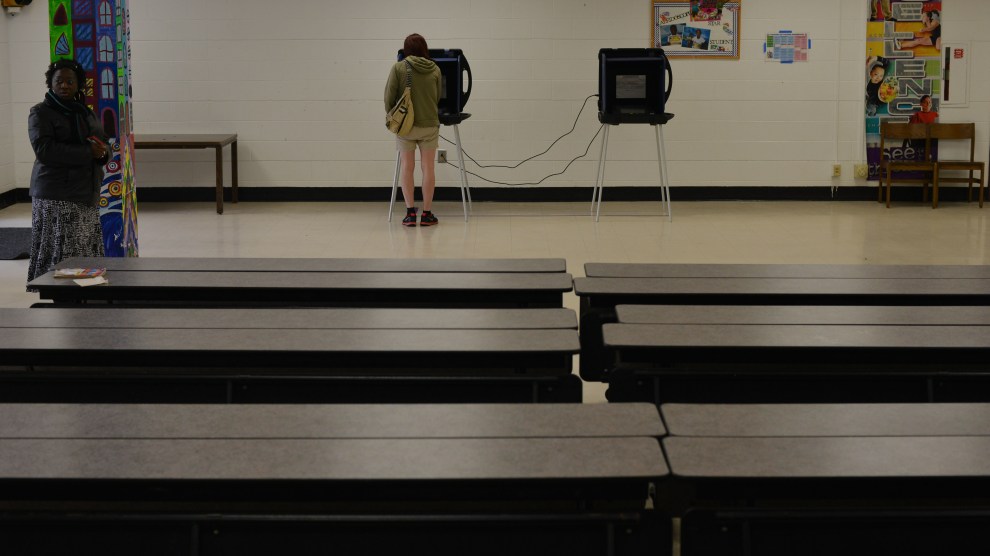 A voter casts her ballot in Charleston, S.C. during the state's 2016 Republican primary.Miguel Juarez Lugo/ZUMA Wire

In 2008, Rush Limbaugh hatched a plan. By March, John McCain had locked down the Republican’s nomination, and while Barack Obama held a lead in delegates, he and Hillary Clinton were still duking it out in the Democratic primaries. If their fight could be prolonged, surely the winner would be too bloodied to pose as much of a threat to McCain in November, Limbaugh surmised. Dubbing his plan “Operation Chaos,” the conservative radio host urged his listeners to show up in open primary states, most notably Indiana, and vote for Clinton in an effort to lengthen the race.

For the last several weeks, right-wingers on the message board 4chan and in r/The_Donald, a subsection of Reddit made up of some of the president’s most toxic online supporters, have talked about encouraging their members to take part in a new operation chaos, starting in South Carolina, the first open primary of the 2020 election cycle. While there have been dozens of posts discussing the prospect, no singular coordinated effort seems to have taken hold, and it is unlikely that even an organized campaign to troll the Democratic primaries would have much effect.

“Talk about monkeying around in other parties’ elections…usually doesn’t translate into anything.”

“The Left is totally devouring itself and it’s a Glorious sight to see. Gulag Bernie Bros have so much hate for Pocahontas.. we should Vote for Warren in any open primaries and keep her going,” one Trump fan on Reddit wrote in a post that picked up over 1,000 upvotes, likely making it to the large subreddit’s homepage.

“I’m voting Bloomberg in the dem primaries. I think all republicans should vote in them for the weakest or most moderate D candidate,” a poster wrote in 4chan’s /pol/ board, the site’s politics focused board that has long been a nest of alt-right trolling. “My state has an open primary, so I will vote for Yang just to fuck with the DNC,” another wrote prior to Andrew Yang dropping out of the race.

Other boards on 4chan have encouraged people to vote for Sanders, reasoning that he is the candidate most likely to bring about a collapse of the United States’ current order and political systems. (Other users have accused anonymous posters advocating for this accelerationist approach as disingenuous pro-Bernie shills.) Some have encouraged voting for weaker performing candidates like Amy Klobuchar and Pete Buttigieg to help sustain their campaigns and drag out the competitive primary season.

While Limbaugh initially called his 2008 campaign a success, when he has touted it recently he has done so in less certain terms. “Actually, it may have worked in Indiana,” Limbaugh said on his show in January, before saying that the plot’s real value was how it got inside Democrats’ heads—a claim that’s virtually impossible to measure. “At any rate, the Democrats were made paranoid by it,” he claimed last month. “They’ve never gotten over it.”

Clinton did win Indiana over Obama, but her victory was in with what polls at the time suggested how that primary would play out and with results in other states with similar demographics. Democrats and other political observers were skeptical Limbaugh’s sabotage plan made a difference, and academic research since has found that his efforts were a wash.

In separate studies, Frank Stephenson, an economics professor at Barry College, and Todd Donovan, a political science professor at Western Washington University, both concluded that Limbaugh’s “Operation Chaos” in 2008 had little to no impact on the race.

“Analysis of exit poll data from 38 states suggests that Republicans may have been voting strategically in Democratic primaries, but there is little evidence that March 4th was unusual in the scope of strategic behavior,” Donovan explains in the abstract of his paper. Stephenson, who looked at voting in four states, reached a similar conclusion.

“People don’t even show up to vote for candidates that they already support.”

“There’s a collective action problem,” Stephenson told Mother Jones. “People like to talk about monkeying around in other parties’ elections, but it usually doesn’t translate into anything in the real world. Many people don’t even show up to vote for candidates that they already support.”

According to Donovan, there’s a fundamental problem for tricksters like Limbaugh who push such plots. Even if they were to lengthen the contest, evidence suggests that longer, drawn-out primaries don’t hurt winning candidates when November comes. “Studies have looked into if a contested, long nomination process has an effect on general. The conclusions are that it doesn’t,” Donovan said.

In a 2015 paper, Robert Hogan of Louisiana State University found that if combative primaries did have an effect, it was one in “the opposite direction than anticipated” by observers who assume they leave the winner weakened.

Hogan chalks this up to the fact that primaries can help expose voters to far more information about the winning candidate than they would get in a shorter election. The finding suggests that even in cutthroat races, almost any exposure becomes good exposure by the time of the general election. In this way, Hogan’s analysis suggests that even if Limbaugh’s intervention had the effect he sought, it would have backfired.

If Limbaugh, one of the right’s largest media figures who has a cult of personality and a near-fanatical base of millions of listeners, failed to have a measurable effect in 2008, its hard to believe that an informal piece-mealed plot launched on fringe internet communities will make a dent this year.

But 2020 is not 2008, and there’s a chance key differences could make such trolling easier and more effective.

As Donovan noted, unlike in 2008, Republicans don’t have a competitive election to vote in, potentially giving them more time and energy to raid Democratic elections. But he said he was still skeptical this would actually happen. (South Carolina Republicans canceled their presidential  primary this year–primaries for lower offices won’t take place until June.)

Stephenson also pointed out that political movements are formed and shaped differently now than in 2008, with the proliferation of social media. Groups can raise and activate campaigns in diffuse and often little-noticed ways that were only just starting to take shape over a decade ago.

“If there’s a change, if this year is going to be different somehow, it could happen because of it being a social media environment,” he said. “Instead of Limbaugh instigating it, people on social media might do it. At the end of the day though, people still have to show up to vote—which is hard.”