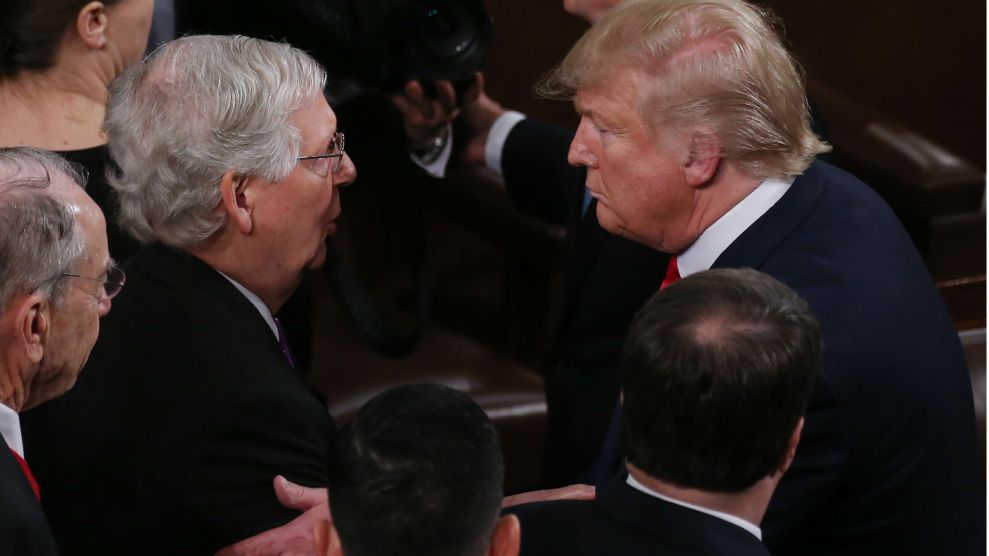 The Senate Intelligence Committee on Thursday released the third volume in its review of Russian interference in the 2016 election. It’s a weird document. The report, which focuses on how the US government reacted to Russian activities, criticizes the Obama administration for its tentative and ineffective response to the election interference. The committee notes that the “heavily politicized environment” faced by the previous administration was one reason for these failures. But the report it avoids the elephant in the room.

Former Obama administration officials have previously faulted Senate Minority Leader Mitch McConnell (R-Ky.) and other GOP lawmakers for blocking their September 2016 request that Congress issue a bipartisan warning about Russian interference in 2016. McConnell reportedly threatened to allege that the White House was misusing intelligence to hurt Donald Trump’s presidential campaign—exactly the kind of fight Obama officials wanted to avoid. These allegations suggest that McConnell feared news that Russia was seeking to aid Trump would hurt Republicans, and that he chose partisan interest over national interest. McConnell has disputed these accounts and attacked the Obama administration for doing too little to respond to Russia’s actions.

Thursday’s report does confirm that McConnell and others Republicans pushed back against the Obama administration’s request for a bipartisan condemnation of Russian interference. But the discussion of those incidents is brief and does not delve into the details of that controversy. The report addresses the flawed interaction between Obama administration officials and the “Gang of Eight,” the Democratic and Republican leaders and top intelligence committee members from each chamber. But it also sidesteps the fact that Intelligence Committee chair Richard Burr (R-N.C.) was part of that group and was involved in the interactions the report details. So was Sen. Dianne Feinstein (D-Calif.), formerly the committee’s top Democrat.

Burr criticized the Obama administration’s response to Russia in a statement Thursday. “Frozen by ‘paralysis of analysis,’ hamstrung by constraints both real and perceived, Obama officials debated courses of action without truly taking one,” Burr said. The report does not mention that Burr himself, while running for reelection in North Carolina, may have helped constrain Obama’s response when he questioned statements made by the administration and Democrats calling out Russian interference.

According to the report, the Obama administration received new intelligence—characterized by the committee as a “wake-up call”—in the summer of 2016. The details of this information, including the date, are redacted, but it came after news in June of that year that the Russian intelligence agents had hacked email accounts at the Democratic National Committee. In early August, CIA director John Brennan “was dispatched to brief Congressional leadership” the document says. Due to Congress’ August recess, Brennan briefed lawmakers individually and reached Republicans only weeks later. He did not speak to McConnell until September 6, 2016.

In a 2018 book, Greg Miller, a Washington Post reporter, wrote that McConnell told Brennan he would respond to any administration claim that Russia was trying to help Trump win by accusing the White House of interfering in the election. McConnell reportedly made similar statements in a September 8 briefing delivered by Homeland Security Secretary Jeh Johnson, White House official Lisa Monaco, and FBI director James Comey. The administration officials wanted the lawmakers to issue a bipartisan statement that warned of Russia interference efforts, hoping the statement would convince state and local officials to seek federal help protecting election infrastructure. The committee says that Republicans rejected requests for a bipartisan statement and that Monaco recalls McConnell saying: “You security people should be careful that you’re not getting used.” Monaco said she believed this was a suggestion that reports of Russian interference were being inflated or used for partisan ends. Thursday’s report says that multiple members “resisted the administration request” for a bipartisan statement, but it names only McConnell.

These meetings are central to how the Obama administration dealt with Russian interference. But the committee’s report addressed them in just a few paragraphs. Of the reported argument between Brennan and McConnell, the report says only that Monaco’s description of McConnell’s remarks on September 8 “comported with Director Brennan’s account of his interaction with Senate Majority Leader McConnell.”

The report also quotes a statement by Burr at a closed-door intel committee session on a July 17, 2018, in which Burr characterized McConnell’s argument at the September 8 meeting : “[T]he question that [Senate Majority Leader McConnell] raised was: Would this not contribute to Russia’s efforts at creating concerns about our election process, if the leadership of the Congress put that letter out?” Burr said. This statement came almost two years after the 2016 meeting in question, and it casts McConnell’s argument as far more benign than in earlier characterizations by Obama officials.

In a statement included in Thursday’s report, Sen. Ron Wyden (D-Ore.) faulted the Gang of Eight for failing to create transcripts or notes on these briefings, leaving investigators to rely on interviews conducted almost a year later. The committee also does not appear to have interviewed or otherwise sought information from members of Congress who were in these briefings, including Burr and Feinstein, who were part of the Gang of Eight at the time. Asked about this, committee spokespeople said the report was focused on the Obama administration’s actions.

Wyden’s views also highlight the consequences of “Republican refusal to publicly acknowledge Russian interference” and the Obama administration’s reluctance to speak out without GOP backing. In Wyden’s view, the inaction made Russia’s dissemination of the stolen Democratic emails more damaging. “If the Administration had informed the public of Russian hacking and dumping earlier than October 7, and had there been bipartisan condemnation of these operations, the public and the press may have reacted differently to the WikiLeaks releases,” Wyden said.

Without GOP support, Feinstein and Adam Schiff, the top Democrat on the House Intelligence Committee, issued their own statement on September 22, 2016, warning that “Russian intelligence agencies are making a serious and concerted effort to influence the US election.” Asked in October about Feinstein and Schiff’s statement, Burr said the Democrats, who were in the same briefing he was, “were probably incorrect.” At the time, Burr was engaged in a hard-fought reelection battle in North Carolina and was linking himself tightly to Trump, who disputed reports of Russian interference.

On October 7—the same day that WikiLeaks began to release emails Russian hackers had stolen from the account of Clinton campaign chair John Podesta—DHS and the Office of the Director of National Intelligence said in a statement that the US intelligence community was “confident that the Russian Government directed the recent compromises of e-mails from US persons and institutions, including from US political organizations.”

Asked during a debate whether believed the intelligence agencies or Trump, Burr did not answer clearly. “It’s not limited to [Russia],” he said. “It’s Iran, it’s North Korea, it’s China.” He added later that he did not “think that really had anything to do with the e-mails or the political parties.”

Burr’s campaign-trail comments are not cited in Thursday’s report.