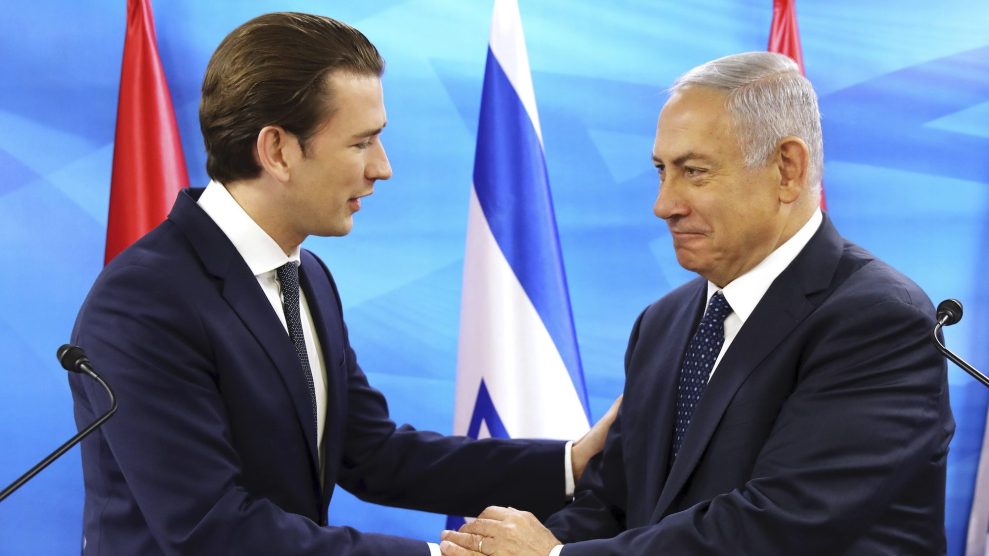 But this year’s AIPAC conference will also feature some deeply controversial speakers. That includes Austrian chancellor Sebastian Kurz, an anti-immigrant politician who has sought to ban girls under 14 from wearing headscarves in schools. Even more awkwardly for AIPAC, Kurtz’s rise to power was initially aided by his alliance with a far-right party with a history of anti-Semitism. Also in attendance will be Serbian president Aleksandar Vučić, a nationalist politician who has praised accused war criminal Slobodan Milošević.

To be sure, both Kurz and Vučić have records that would make them appealing to AIPAC. Since entering politics, Kurz has positioned himself as a strong supporter of the Israeli government, making multiple visits to the country and forging a close relationship with Prime Minister Benjamin Netanyahu. And despite his past political alliances, he’s been an outspoken voice against anti-Semitism. Vučić, too, has sought to raise awareness about anti-Semitism and the holocaust. Still, AIPAC’s critics say those gestures don’t erase the more troubling aspects of the two leaders’ politics.

“AIPAC’s modus operandi is to valorize anyone who’s willing to unequivocally praise the Israeli government without meaningfully criticizing the ongoing occupation, and without insisting on the importance of Palestinian rights alongside Israeli security. These days, the most prominent voices willing to do that are most often coming from the ethno-nationalist, xenophobic right wing,” said Logan Bayroff, a spokesperson for J Street, an American Jewish advocacy group that seeks to end the Israeli occupation of the Palestinian territories.

Xenophobia—and specifically warnings that immigrants pose a threat to European identity—has indeed been a hallmark of Kurz’s rhetoric. Most of the migrants seeking refuge in Europe are from Muslim-majority countries, and four of the top five origin nations of newly naturalized EU citizens are majority Muslim. In January, Kurz told the Financial Times that he was proud of Austria’s status as a “Christian-dominated” country. “If we do not fight against illegal migration, Europe will not be the same in five, 10 or 20 years,” he told the paper. “If we do not control who is allowed to come we will not be able to live in security…and we will not be able to keep our identity.”

In 2017 Kurz formed a coalition government between his center-right Austrian Peoples’ Party and the Freedom Party, an extreme right-wing party that was originally founded after the Second World War by a former Austrian SS officer. Though the Freedom Party’s agenda has shifted from its origins and is now focused on demonizing Muslims, it has still been associated with a number of anti-Semitic incidents in recent years. (Kurz, on the other hand, has used his platform to speak out against the persecution of Jews—and has promoted events highlighting Jewish identity.)

Kurz’s coalition with the Freedom Party finally came to an end in May 2019, when Freedom Party leader Heinz-Christian Strache became embroiled in a scandal that dominated the Austrian press. Video of a sting operation orchestrated by an unknown party showed Strache speaking with someone claiming to be an associate of a Russian oligarch; Strache appeared to offer public contracts in return for political campaign support. After a vote of no confidence, Kurz stepped down, only to return after his party won new elections in September 2019.

The Freedom Party’s stint as a partner in the governing coalition may not have lasted for long, but it coincided with a troubling time in Austria. The European Union Agency for Fundamental Rights reported 88 anti-Semitic incidents in Austria perpetrated by right-wing extremists between 2017 and 2018—similar numbers to earlier in the 2010s, but a marked increase from proceeding decade. In fact, Austrian intelligence organizations—responsible for preventing such attacks—found themselves in the awkward position of being overseen by a party with political ideals resembling the fringe groups they were tasked with monitoring. According to a May 2019 New York Times article, “Inside the agency, senior operatives described a situation in which they now find themselves protecting informants and information not only from hostile states—but from members of their own government.” During the Freedom Party’s tenure, Jewish groups in Austria maintained a no-contact policy with the party, and one Jewish Austrian community leader called the party’s eventual ouster a “validation of the Jewish community.”

Since January, Kurz’s Austrian People’s Party has been partnered in a governing coalition with the Austrian Green party, but his anti-migrant agenda is still present. The 300-page contract between the two parties includes plans for Kurtz’s head scarf ban in schools. Kurz recently described illegal immigration as a threat of equal stature to that posed by climate change.

Much like Kurz, Vučić has embraced nationalism. He began his political career in 1998 as information minister for the government during violent clashes with ethnic Albanian separatists in Kosovo. According to Foreign Policy, that job entailed downplaying the brutality: “Serbia needed a lot of explaining, and Vučić cut his teeth defending Belgrade in the face of foreign criticism.”

Vučić’s efforts to downplay Serbian military violence against ethnic minorities isn’t just a thing of the past. During a 2018 speech while visiting ethnic Serbs in Kosovo, Vučić—whose leadership has been marked by a growing authoritarianism—sparked outrage by praising Milosevic. “Milosevic was a great Serbian leader whose intentions were certainly for the best, but our results were very poor,” Vučić said, according to the Associated Press. “Not because he wanted that, but because our wishes were unrealistic, while we neglected and underestimated the interests and aspirations of other nations.”

For Bayroff, the elevation of figures like Kurz and Vučić is a worrying development. When the rhetoric of such leaders becomes legitimized, he says, “it never ends up being good for the Jewish people.”