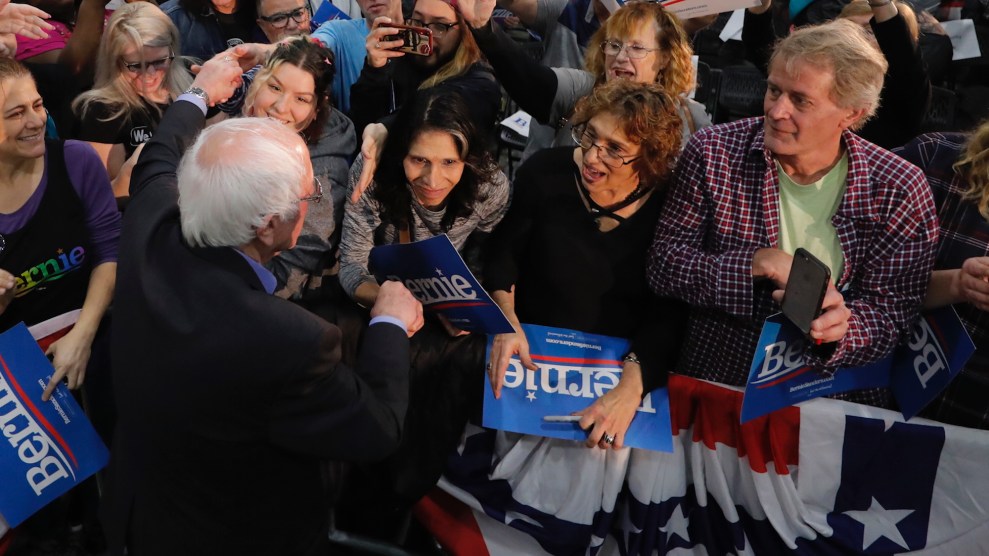 At a Bernie Sanders rally in Myrtle Beach, South Carolina, on Wednesday afternoon, I met George Rollins and Bryan Hill, best friends who grew up in Lake City, a town an hour west of the convention center where the event was held. Both had retired from working as schoolteachers in South Carolina public schools—Rollins taught first grade, Hill taught high school civics—and are enjoying the good benefits that can come after a long career in the public sector.

“The thing is, we’re doing just fine,” Rollins said in a gravely South Carolina drawl. “But too many people have this attitude, ‘I got mine, but to hell with you.’”

It’s a common sentiment among older voters who’ve told me they’re supporting Sanders, not because he’ll improve their lives, but because they think he has a vision for those who are younger and struggling.

“Why wouldn’t an older citizen vote for somebody with that kind of a record?”

Polling suggests Sanders is underperforming among South Carolina’s older voters. An NBC News/Marist survey released earlier this week showed Joe Biden crushing Sanders across the demographic. While that poll generally captured a neck and neck race between those two candidates, it found 36 percent of “baby boomers” ages 55 to 73, and 40 percent of those over 73, favoring the former vice president. Sanders, meanwhile, only got 12 and 8 percent of their support, respectively.

Myrtle Beach could be seen as a unfriendly ground for Sanders to stump in the last days before Saturday’s South Carolina primary. Behind Florida, the state has the oldest population in the South, a trend-line growing thanks to its increasing popularity among retirees, with the seafront city boasting an even greater concentration than average. When I text Laurin Gandy, a longtime South Carolina Democratic operative for her take on the area, she responds with a series of old person emojis.

But nearby Coastal Carolina University supplies a fair number of young people, and other residents are concerned about what coastal flooding could mean for their beach community. But for every young person rocking Bernie swag or a South Carolina Conservation Votes shirt at the rally, there was an older person, often donning the retiree uniform of windbreaker, khaki pants, and slip-on leather shoe. (To be fair, the rally was at 3 in the afternoon on a workday.)

The Sanders campaign tacitly acknowledged its shortcomings with aging voters last Thursday when it announced that Dick Van Dyke, the 1960s-era sitcom star and music man of Mary Poppins fame, had endorsed Sanders. In an accompanying video, the nonagenarian showman puckishly tells viewers that “somebody younger, like Bernie” is a “perfect candidate” for the “most important election since the end of World War II” as he extols Sanders’ support for universal health care and democratic reforms. “I can’t understand why, according to the polls, he’s having problems with older citizens like me,” Van Dyke says. “Why wouldn’t an older citizen vote for somebody with that kind of a record, and with that kind of experience and honesty?”

Pundits answer Van Dyke’s question by suggesting Sanders’ bold positions have alienated older voters—who tend to be more moderate—specifically his support for a Medicare for All system that could upend the health care plans retirees now rely on. Indeed, some older voters who had come to see Sanders said they probably won’t vote him because of his single-payer vision. “I want everyone to have insurance, but I want people to be able to keep their own,” Peggy Jeffries tells me. She hasn’t yet decided who she’ll vote for, but is leaning to Biden. “He’s so much more conservative than I am, but I’m really afraid of picking someone too liberal.”

But a number of older people I spoke with said Sanders’ plan didn’t concern them, or that they support him despite it. Scott Edwards, a retired ophthalmologist who lives part-time in South Carolina, said he likes the idea of people being able to keep their current insurance and thinks that even under Sanders’ proposal, people should pay for health care on a sliding scale. But he thinks the Vermont senator is sincere, and views his emphasis on the topic as a guarantee that health care would be the top cause of his administration.

Others cited concerns about the next generation and those who don’t have it as good as they do. “He clearly understands minorities, women,” Hill tells me. “He talks about equality in all aspects of life—equal pay, justice for the young black men.”

Among the biggest applause lines of Sanders’ stump in Myrtle Beach was one that admonished the state’s Republican governor and legislature for disempowering unions. “I like unions!” Sanders yelled as the crowd cheered. And for Mary Eaton, a retired bankteller who made “less than 15 dollars an hour” during her 46 years on the job, she feels his platform would correct wrongs she faced in her working life.

“I just love him,” Eaton says about Sanders, clutching her hand to her heart. “He stands for all of us common people. And I really think he can do something for all of us.”