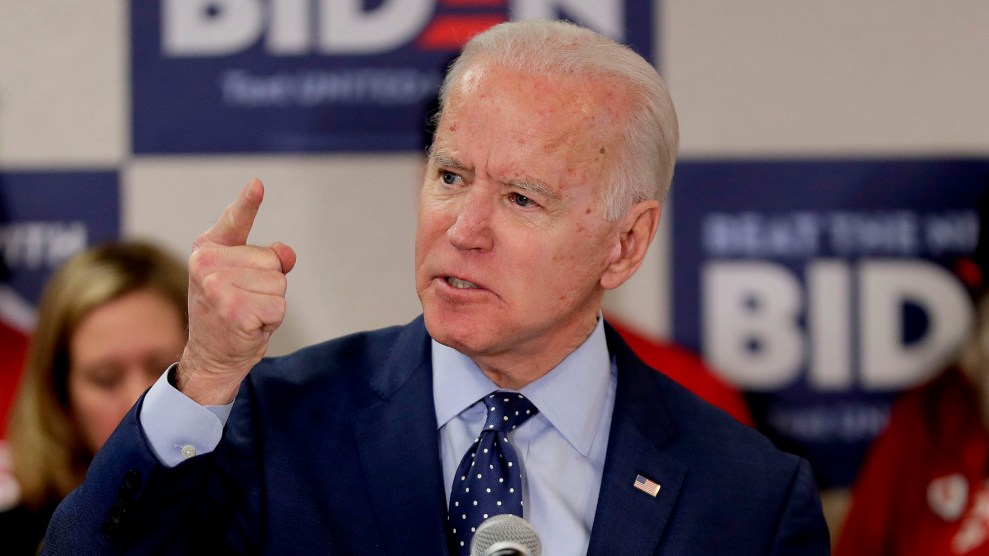 Thursday is a light day on the Nevada campaign trail, with no events scheduled in the afternoon for any of the major candidates. (Everyone’s presumably getting some R&R ahead of Tom Steyer’s big concert with TLC.) But this morning, Joe Biden issued a last-minute advisory: he’d be speaking at a community in Las Vegas to “lay out his vision,” as campaigns say, about defeating the National Rifle Association.

But it may have said more about his plan to defeat Bernie Sanders. If the debate at the Paris casino was mostly about ganging up on Michael Bloomberg, Biden’s event was more of a re-set—if he is going to win the nomination, he is also going to have to overtake the Vermont senator, if not here in Nevada, than definitely next week in South Carolina. On Thursday, he briefly tried to demonstrate how. If it sounds familiar, it’s because it’s the same argument Hillary Clinton used against Sanders ahead of the first-in-the-south primary four years ago: hammer loudly and persistently on gun control.

After being introduced by Rep. Steven Horsford, who lost his own father to gun violence, the former vice president ripped into “everybody out there who says ‘my thoughts and prayers are with you'” and touted his past work in enacting an assault rifle ban and the Brady Bill.

“It’s long past time that we correct one of the most egregious special interest giveaways the United States Congress has ever engaged in,” Biden said. He was referring to liability immunity for gun manufacturers against lawsuits from victims of gun violence, which Sanders voted against as a congressman in 2005.

“We don’t grant that kind of immunity to anybody else,” he continued. “Imagine if I stood up here today and said ‘I voted to give immunity to the tobacco companies.’ ‘I voted to give immunity…to drug manufacturers who poured nine billion opioids out on the market.’ Imagine—imagine if I stood here and said to y’all that ‘I…voted for giving immunity to oil companies for pollution and the damage they do to the groundwater supply, to the air, etc.’ Folks, it’s just flat-out immoral.”

In case that wasn’t clear enough, Biden singled out his opponent by name. “Too many Republicans, and some Democrats, like Bernie Sanders,” opposed the gun-control measures Biden supported. Sanders, he noted, “voted five times against the Brady Bill that I was passing. Five times!”

Biden, as he often does, recounted the tragedies that have shaped his life—the loss of loved ones to a car accident and cancer. But government responded to automobile fatalities with safety regulations, and combatted cancer with research. “Why are guns different?,” he asked. “Because of cowardice. Because of cowards. Cowards who are afraid to take on these special interests because they’re too powerful.”

As he turned to leave, reporters asked Biden several versions of the same basic question—was he saying that Sanders was immoral? Biden didn’t answer, but as he paused to let the activists who had stood behind him to exit through the side door, he half-turned toward the cameras and spoke up.

“I do think his views have changed,” he said. “And I’m happy for that.”