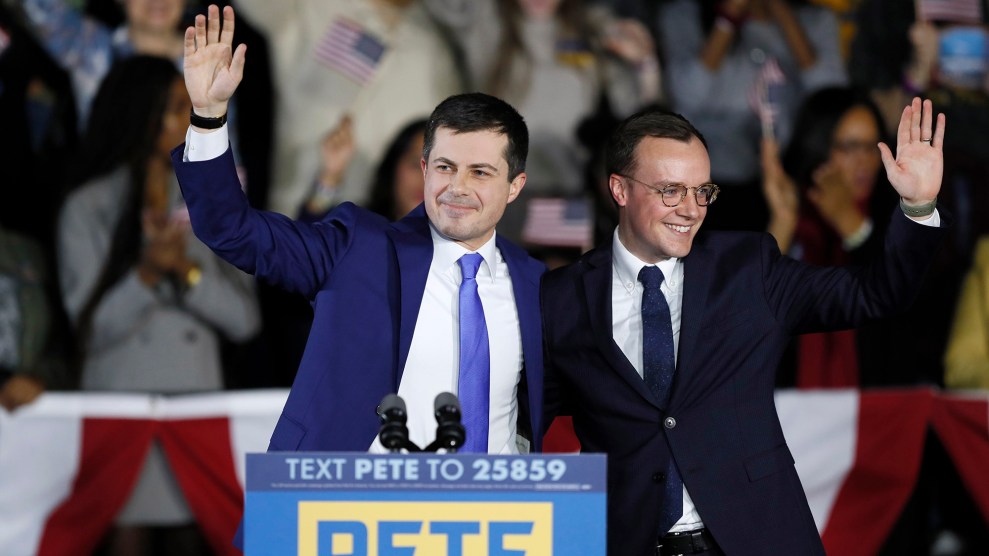 Pete Buttigieg and his husband Chasten wave to supporters at a caucus night campaign rally in Des Moines.Charlie Neibergall/AP

It took nearly a week, but former South Bend Mayor Pete Buttigieg has been declared the winner of the Iowa caucuses’ state delegate count, narrowly beating Sen. Bernie Sanders, who, since nothing about the Iowa caucuses can be simple, won the tally that is most akin to a popular vote.

The Iowa Democratic Party announced Sunday that Buttigieg would come out on top, winning 14 delegates to Sanders’ 12, although the Associated Press has yet to call the race and it appears that inconsistencies in the results remain. Sen. Elizabeth Warren finished a solid third in last week’s caucuses, while former Vice President Joe Biden, the presumptive frontrunner for the nomination, finished fourth.

Buttigieg’s rise in Iowa is telling. It showed that the more moderate lane of the Democratic voter base might find a fresh-faced political newcomer more appealing than a decades-long politician with immense political baggage. (Buttigieg wasn’t born when Biden started his second term in the Senate.)

And while he hasn’t emphasized it, Buttigieg is running a trailblazing campaign as the first openly gay candidate with a serious shot at capturing the nomination of one of the two main political parties. Donations from LGBTQ funders helped spur his initial rise, but as I wrote when I followed him around Iowa last week, he made scant mention on the stump of his unique role in national politics.

An openly gay candidate winning a presidential contest is noteworthy nationally, of course, but it’s especially remarkable given Iowa’s history on LGBTQ rights. It was one of just three states where same-sex couples could wed when the state Supreme Court legalized marriage in 2009. But Iowa opened the door to same-sex marriage through a court ruling, not legislation, and there were signs that the public was wasn’t entirely on board. Three of the seven judges behind the decision were voted out of office the next year, after a vicious campaign by conservative activists. Suburban and especially rural Iowans led the backlash against same-sex marriage.

Ten years later, Buttigieg’s success in Iowa came thanks to his performance in many of those same rural counties. Sanders outperformed Buttigieg in most of the state’s urban areas, while Buttigieg cleaned up many of the sparsely populated, historically Catholic counties in eastern Iowa that backed Trump in 2016 and opposed marriage equality a decade ago.

“He’s getting support in the areas where we lost the worst on marriage,” Iowa Democratic Party chair Troy Price, who previously ran an LGBTQ rights group that helped sue to legalize marriage, told me last week. “It’s the suburban areas, it’s the rural areas, that’s where he’s doing really well.”

In 2012, I spent time in Clayton County, a rural area in northeastern Iowa that voted heavily against the three judges in 2010, to assess how perceptions of same-sex marriage had change since it had become legal. I found that that there were still plenty of people there opposed to marriage equality—one pastor told me that people accepting same-sex marriage don’t “follow the word of God as it’s written”—but the handful of same-sex couples in town had helped thaw the hostility of their neighbors. They were just part of the community. “Nobody is anonymous here,” one half of an older married gay couple told me, “and that’s what makes it very gratifying. That you are known.”

Buttigieg won the vote in Clayton County by 15 points. It was one of his strongest counties in the state.