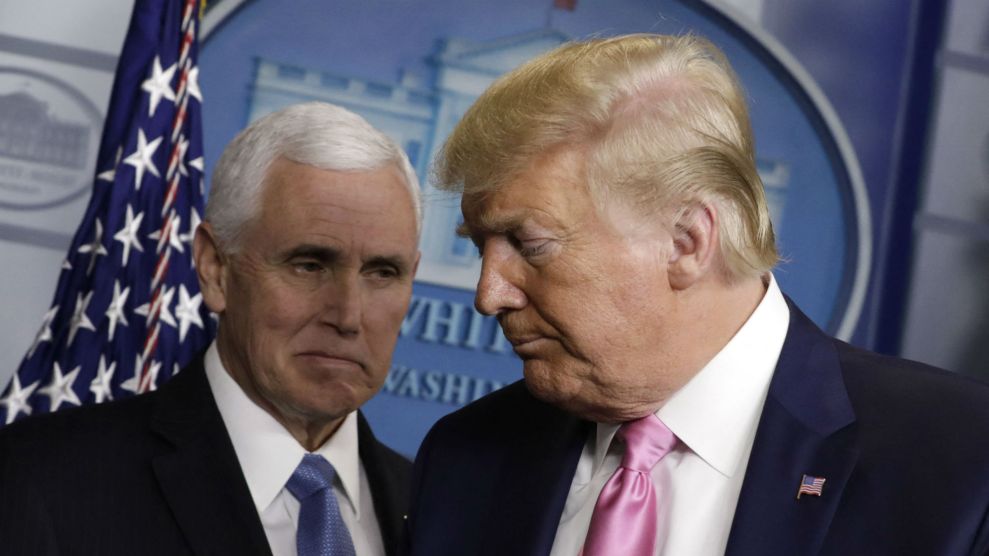 At a press conference Wednesday afternoon, President Donald Trump announced Vice President Mike Pence will oversee the administration’s coronavirus response. Pence “has got a certain talent for this,” Trump said.

It’s an unusual choice, given the vice president’s lack of a medical background and controversial handling of an Indiana HIV outbreak when he was governor there in 2015. As Mother Jones has reported, Pence “ignored public health officials’ warnings about the state’s HIV outbreak, opting at first ‘to pray’ instead.” Pence was also reportedly reluctant to institute needle exchanges during the outbreak, which experts said contributed to the spread of the infection.

Ahead of today’s announcement, Trump had reportedly been considering appointing a coronavirus czar. (The White House denied the report, saying they were “pleased with the leadership” of Health and Human Services Secretary Alex Azar.) Trump insisted during the conference Wednesday that the position was not a “czar,” although Pence will be “working with the professionals, doctors, and everybody else” in response to the outbreak, and will be reporting back to the president. Azar said he will continue to lead the president’s coronavirus task force.

According to Trump, the threat of coronavirus in the United States is “very low.” (The CDC ranks the immediate health risk of the virus as “low,” but warns it is likely to spread in the US.) Of the 15 people in the US first diagnosed with the disease, Trump said, one person is “pretty sick” and in the hospital, nine have returned home or are in the process of doing so, and five have fully recovered.